New insights: how potassium and sodium are conducted through ion channels 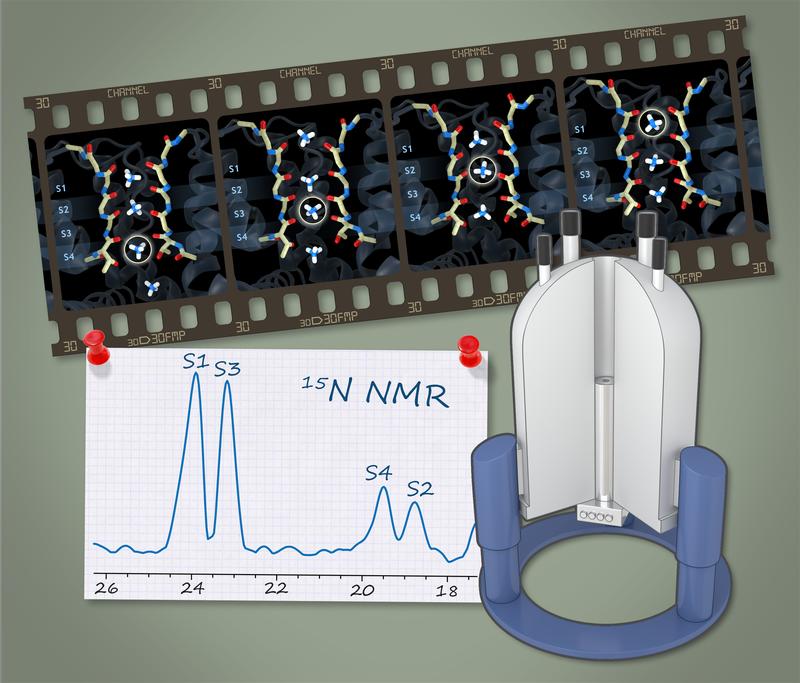 Tiny ion channels are responsible for transporting potassium and sodium to our cells. In the process, ions must pass through a bottleneck, referred to as the selectivity filter. Although the structure of this filter has already been well described, it was previously not possible to observe the actual ions in the channel, at least not under natural conditions. By further developing solid-state NMR spectroscopy, researchers from the Leibniz-Forschungsinstitut für Molekulare Pharmakologie (FMP) have managed to do just that. The new insights, which have now been published in the renowned Journal of the American Chemical Society, are also of great importance beyond basic research.

Despite being only a few nanometers in size, they are of fundamental importance for biological processes: Ion channels allow essential ions such as potassium and sodium to enter and leave our cells. Potassium ions are needed for functions such as nerve impulse conduction and heart rate control. Even the smallest changes to these channels can lead to serious complications. It therefore comes as no surprise that science focuses extensively on these tiny cell membrane proteins. Several research groups at the Leibniz-Forschungsinstitut für Molekulare Pharmakologie (FMP) in Berlin are involved in this field; in fact, some of these channels were discovered by them.
Professor Adam Lange’s research group has been studying ion channels in cell membranes under near-native conditions using solid-state nuclear magnetic resonance (NMR) spectroscopy for some time. This technology provides more compelling data than the standard method of X-ray crystallography, which is only able to display these small channels in an unrealistic environment. Technological advances in recent years have enabled researchers to learn a great deal about the function and structure of the selectivity filter – the central bottleneck in the channels that countless billions of ions must pass through every day.
Until now, however, scientists were unable to observe ions in the filter under natural conditions, given that it is practically impossible to detect potassium and sodium using NMR spectroscopy.

The trick with ammonium
The research team has now solved this problem by applying a trick: the ammonium ion, with its two components nitrogen and hydrogen, can readily be detected in NMR spectroscopy, and is very similar to potassium ions in other respects. It serves as an excellent substitute in this case, mimicking potassium ions.
“Before, we were unable to see the ions; we were blind, as it were, because no suitable technology existed,” explained Carl Öster, lead author of the study published in the prestigious JACS journal. “The trick with ammonium and other technical adjustments meant that we were now able to view ions directly in the channel for the first time.”
The researchers want to use the “ammonium method” to study such things as pharmacological effects. Some molecules and drugs have been shown to influence the configuration of ions in the selectivity filter. Until now, however, it had been difficult to investigate exactly how this happens.

New perspectives for ion channel research
For the current study, Adam Lange and his research group collaborated closely with researchers from the Max Planck Institute for Multidisciplinary Sciences in Göttingen. Work performed by the colleagues from Göttingen included conducting molecular dynamics simulations, which allowed them to observe how ions flow through the channel on a computer. They additionally carried out measurements on a 1.2 GHz NMR spectrometer, the results of which were also incorporated into the current study. Göttingen is just one of a few locations worldwide that have such high-resolution equipment.
However, the Campus Berlin-Buch will also soon be home to a 1.2 GHz NMR spectrometer. The FMP is currently constructing a dedicated building, which should be ready by the summer. “It will give our site a tremendous boost for the next ten years,” stated Adam Lange. The biophysicist also has another aspect in mind: “This cutting-edge device will allow us to look at even more complex ion channels, and sooner or later this basic research will also prove highly beneficial for pharmacological approaches.”