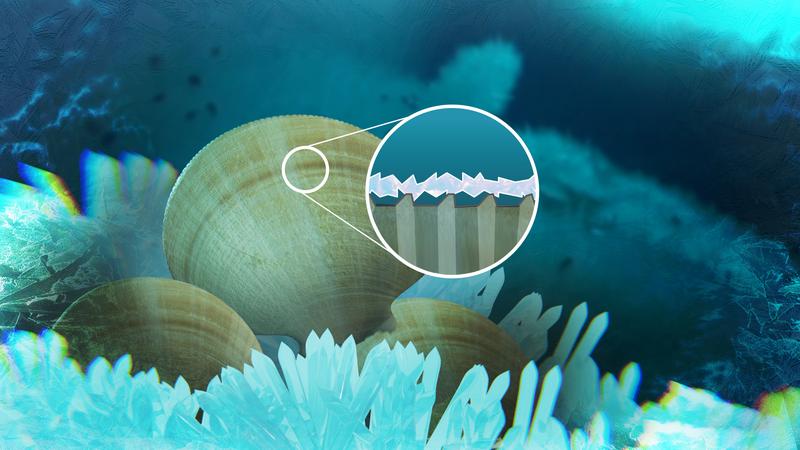 Airplane wings that don't ice up or solar cells that generate electricity even in winter - ice-free surfaces are important for many applications. A team of scientists led by Konrad Meister, professor at the University of Alaska Southeast and group leader at the Max Planck Institute for Polymer Research, has now studied an Antarctic scallop species that opposes the icing process with the help of its shell surface. Due to their special structure, thin layers of ice adhere poorly and are easily washed away by the flow. The discovery could help in the development of ice-free bionic surfaces in the long term.

Antarctic waters have conditions in which objects and living creatures can freeze even under water. This is a major problem for marine travel in polar regions. So-called supercooled water has a temperature just below the freezing point. Due to the high salt content, water in Antarctica has a freezing point of about -1.9 °C, but is about 0.05 °C colder. The smallest disturbances such as grains of sand or surfaces can cause this supercooled water to freeze - with sometimes fatal consequences for creatures that cannot survive frozen.

The Antarctic scallop "Adamussium colbecki" resists this, as chemist Konrad Meister knows. Meister is a professor at the University of Alaska and heads a research group in Mischa Bonn's department at the Max Planck Institute for Polymer Research (MPI-P) in Mainz. During an expedition in Antarctica, divers drew his attention to the scallop with the efficient ice protection mechanism. "Our divers reported that they had never observed large-scale ice on the surface of this native scallop species," Meister says.

The international research team, consisting of members of several MPI-P research groups as well as the University of Oregon, suspects that the scallop species developed a special surface structure during evolution that protects it from icing. While scallops in warmer regions have disordered or smooth shell surfaces, the Antarctic species has a microscopic, very regular structure.

The microscope reveals small ridges that run in a radiating pattern on their shell. These ridges ensure that water freezes preferentially there. If the freezing process continues, a continuous layer of ice forms, resting only on the ridges. Due to the low adhesion between ice and shell, the smallest underwater flow can therefore wash off the ice again and the scallop does not freeze.

In addition to microscope studies, the research team also conducted icing experiments with the Antarctic and with a scallop from warmer regions. It was found that far less force is needed to remove the ice layer on the Antarctic scallop than for the other species.

"It is exciting how evolution has obviously given this scallop an advantage," says Konrad Meister. "New technological applications based on the principle of bionics are conceivable from the knowledge of the ice-free shell. For example, non-icing surfaces could be highly interesting for polar shipping."

The researchers have now published their research in the scientific journal "Communications biology," a journal from the "Nature" portfolio.