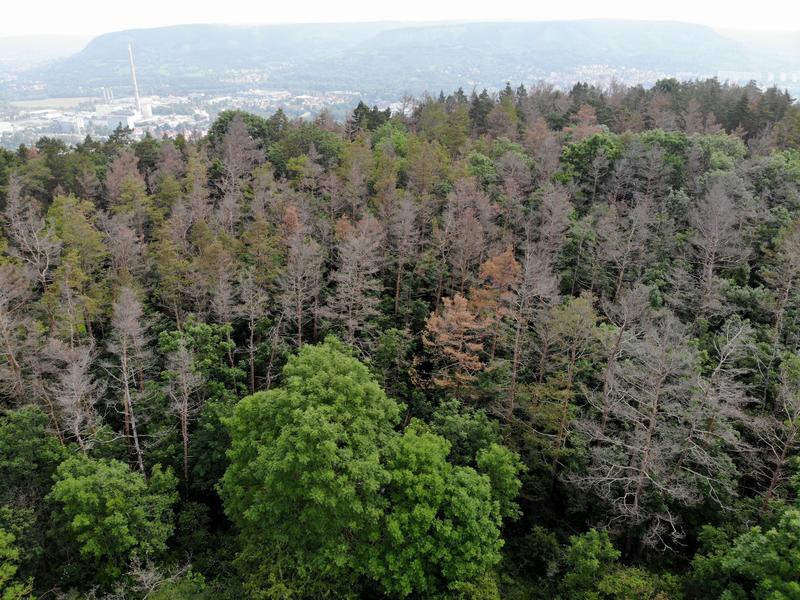 International forest experts analyzed major tree and forest dieback events that occurred globally in the last decades in response to climate extremes. To their surprise many forests were strongly affected that were not considered threatened based on current scientific understanding. The study, led by the MPI-BGC and published in Annual Reviews in Plant Biology, underscores also that further tree and forest dieback is likely to occur. The experts highlight how improved data structures can contribute to causal research and early detection.

In addition to increasing temperatures, climate change also manifests itself with extreme weather events that are becoming more frequent and more severe. This was also the case with the droughts of the summers of 2018 and 2019, which damaged German forests. However, such extreme events and their impacts are not new phenomena or limited to Central Europe. Reports on climate-induced tree mortality and large-scale forest damage due to climate extremes date back almost 50 years and occurred all over the world.

In a study published in Annual Reviews in Plant Biology, Dr Henrik Hartmann, group leader at the Max Planck Institute for Biogeochemistry in Jena, Germany, and international colleagues took a closer look at forest dieback events that had occurred across the globe over the past 20 years. Knowledge of local forest experts were also considered in their analysis. "What worries us most is that forests were strongly affected even though we thought they were not actually considered to be at risk," says Hartmann. The authors document this in details with examples from the Amazon, Costa Rica and the USA, but also from Spain, Australia and Germany. "All these forest ecosystems were either located in regions where climate extremes had previously been considered unlikely," explains Hartmann, "or ecosystems and tree species were affected that had been considered tolerant of extreme dryness and drought.

Large-scale dieback of native Scots pine was also investigated. In the study area in Thuringia, but also throughout Germany, this tree species has suffered greatly from the droughts of 2018 and 2019. Mortality rates have skyrocketed in recent years. With its deep roots, pine has been known to withstand water shortages well. It can draw water from deeper soil layers and compensate for a lack of water in the upper soil, at least in the short and medium term. However, the climatic trend in recent decades has led to drying even in deep soil layers, especially in eastern and northern Germany. "This means that pine's survival strategy no longer works, it suffers from drought stress and thus also becomes susceptible to insect infestation, which is often the last straw to break the camel’s back," Hartmann explains further.

The authors further investigated how such dieback events from climate extremes can be detected at an early stage with remote sensing and whether it can be predicted with vegetation models. The results are rather sobering. For example, satellites detect changes in canopy cover, but the real extent of forest damage with high proportions of dead trees is not captured. As for vegetation models, they always had difficulties predicting tree mortality. However, the fact that even such striking examples are only rudimentarily reproducible at best by state-of-the-art models illustrates the scope of the study.

"We are in a situation where the current knowledge of experts is reaching its limits, because recent climatic events, as well as those expected in the future, are unprecedented. Thus, we cannot foresee forest responses," says Dr. Ana Bastos, co-author of the study and also a group leader at the Max Planck Institute for Biogeochemistry. "We still lack appropriate tools for rapid detection of forest damage, causality analysis and predictions."

Causal mechanisms of dieback could be identified from a combination of already existing data sets and thus contribute to improving vegetation models. Suitable data sets like forest inventories or other monitoring activities exist, but their spatial and temporal resolution should be improved. Currently, dead trees and possible causes of mortality are usually not even recorded at all, and intervals between data collections are often too long, and the spatial plot density is too low.

One possible solution to fill these data gaps is remote sensing. "But even here, the spatial resolution is often too low to detect dieback of individual trees," Bastos adds. Matching site conditions with species behavior during climate extremes could be crucial for better understanding dieback. But there is still a long way to go before that happens. "Easy and open data access and internationally coordinated improvement of forest surveys are key elements here," says Hartmann, " and actually technically easy goals to achieve in today's world." But administrative and legislative hurdles often stand in the way.

So, in conclusion, Prof. Craig Allen of New Mexico, USA, senior author of the study and founding father of the global map of forest dieback, concludes that sudden and unexpected deaths of trees are likely to continue to occur, "soon, in a forest near you."