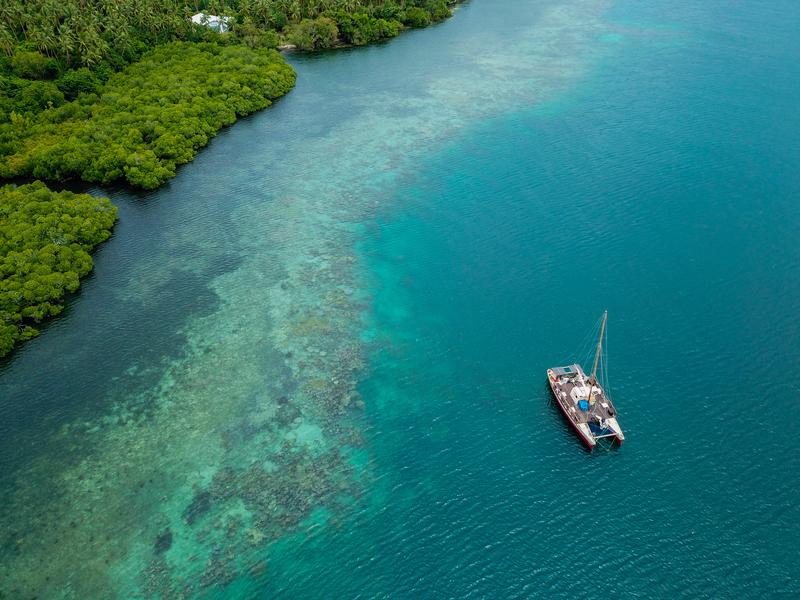 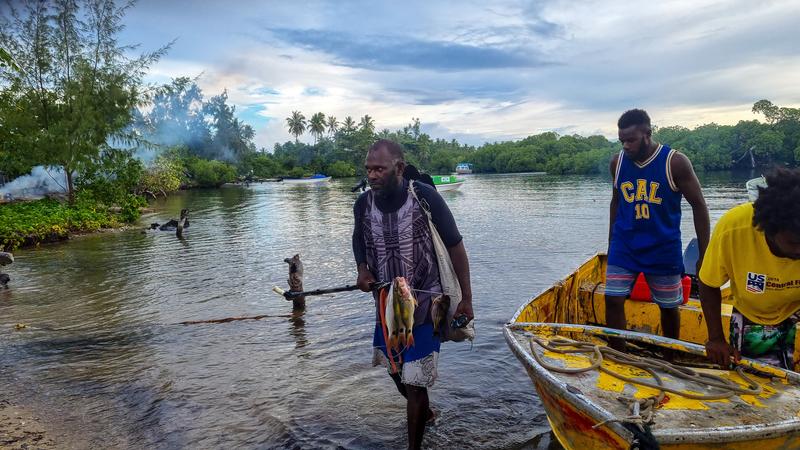 Due to the pandemic, research expeditions are limited for many scientists. In order to continue conducting research in the South Pacific island nation of Vanuatu, Dr. Annette Breckwoldt, a marine scientist at the Leibniz Centre for Tropical Marine Research (ZMT), has joined forces with a local team from the Okeanos Foundation for the Sea, which operates a catamaran from its Polynesian fleet in this remote region.

The pilot project between the German foundation, based in Darmstadt, and the ZMT in Bremen, Germany, was recently completed. Currently, the team is reviewing the data and recordings.

Actually, the Okeanos Foundation uses its Polynesian catamarans with modern technical equipment, called Vaka Motu, for passenger and cargo transport, health care, educational projects and disaster relief. Earlier this year, however, a different task was on the agenda. The crew was on a research mission to two remote islands in the Vanuatu archipelago: on Malekula and Maskelyn, the task for Bremen-based scientist Annette Breckwoldt and her project colleagues was to ‘accompany’ the crew to conduct interviews with the local population. Among the crew members: a cameraman and locals from both islands, who interviewed their compatriots in their own language and recorded the conversations on film.

"We were able to make ideal use of our existing infrastructure to support the studies and at the same time combine this with the goals of our foundation", says Okeanos spokeswoman Jana Steingaesser, describing the cooperation. "Okeanos works in the Pacific to provide sustainable sea transport to island communities on a traditional basis, ensuring independence, cultural revitalization and marine conservation."

For the ZMT, in turn, the surveys are an important part of the social science work for the Franco-German research project "SOCPacific", which is funded by the German Research Foundation (DFG) and the Agence Nationale de la Recherche (ANR).

Project coordinator Breckwoldt and her French colleague Dr. Elodie Fache from the Institut de Recherche pour le Développement (IRD) want to find out how fishing practices are developing in the South Pacific. They are interested not only in economic and ecological aspects of fishing, but especially in the large and multi-facetted web of socio-cultural and geopolitical connections within which fishing practices evolve, and which play an equally important role in marine conservation.

In previous interdisciplinary research in the region, Breckwoldt and Fache had encountered a feature that caught their attention - reef passages were mentioned frequently and in multiple contexts.

"Coral reefs off the coasts of tropical islands are characterized in many places by openings or channels. Ocean currents, waves, tides, river sediments and nutrients run through these so-called reef passages", explains Annette Breckwoldt. "Sharks, turtles and schools of fish pass through the passages in search of food, shelter or a spawning area. So for the coral reef ecosystems, reef passages play an important role. Together with our local partners, we now want to find out what exactly reef passages mean to island populations so that better understanding and knowledge can be integrated into local decision-making processes for the protection and sustainable management of the coasts and fisheries."

Equipped with an extensive questionnaire that was co-developed with the scientists, the Okeanos team selected the islands of Malekula and Maskelyn for the accessibility of some of their reef passages, and arrived by catamaran in January, in order to document for the first time on film the significance of these structural features for the local population.

"Initial evaluations show that local people place tremendous value on reef passages and use them in a variety of ways", Breckwoldt reports. "Reef passages are used for food procurement or have socio-cultural relevance, for example, as passages for the souls of the deceased; and some local measures have already been introduced to protect them."

“In the South Pacific, local communities are increasingly engaged in integrated management of marine habitats and resources”, Breckwoldt says. "The locally initiated protection of reef passages shows us the relevance of local knowledge and incorporating it into the design of appropriate and meaningful measures to protect coasts and nearshore marine areas", the researcher emphasizes.

During the pilot project, Breckwoldt and Fache quickly realized that support from the Okeanos team in Vanuatu provided a great opportunity to get close to their research and local research partners, even from afar. Now, the researchers hope that this initial project will be the beginning of a longer-term collaboration with the communities of the South Pacific archipelago and the Okeanos Foundation.

The Okeanos Foundation for the Sea considers the cooperation groundbreaking not only because of the pandemic situation worldwide but also with regard to sustainability aspects: "We see that research collaborations could develop into another mainstay for our foundation", says Jana Steingaesser from Okeanos. "This is partly because there are big data gaps for the Pacific region, but also because of the developments in the pandemic and the travel restrictions that come with it."

More information on the "A Sea of Connections: Contextualizing Fisheries in the South Pacific Region - SOCPacific" project: https://socpacific.net/

More about the Okeanos Foundation for the Sea: https://okeanos-foundation.org/