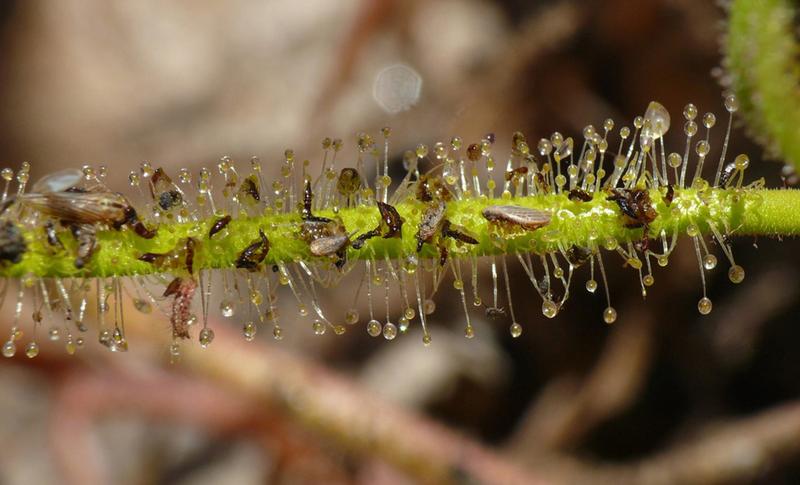 SNSB researchers determine the exact diet of Australian carnivorous plants by analyzing the genes of their prey. Even tiny parasites on captured insects could be detected in this way. The scientists have now published the results of their study in the journal Scientific Reports.

However, studying prey spectra of carnivorous plants in their natural habitats has thus far been hampered by the fact that a) the areas with great diversity of these botanical predators are often quite remote and difficult to access, b) long-term studies would require many weeks of observation which kind of insects are trapped by a certain carnivorous plant species, and c) – most importantly – digested insect prey is often hard to identify, even by trained entomologists. Soft-bodied insects such as midges often turn into unidentifiable crumbs during digestion on the carnivorous leaves.

In order to solve these problems, researchers from Curtin University, Western Australia, and the Botanical and Zoological Natural History Collections (SNSB BSM & ZSM), Munich, Germany and the University of Munich (LMU) jointly developed a new method to study the prey spectra of carnivorous plants. They did so by combining macro photography of the captured insects with the cutting-edge method of insect identification by DNA metabarcoding. Any insect that is captured by a carnivorous plant will contain traces of its genetic material (DNA), even after digestion by the plant. As a study organism, the researchers chose carnivorous plants of the genus Drosera, known as sundews. “Drosera are perfect for this kind of research because their glistening sticky leaves constitute open traps, hence prey can easily be seen and photographed, and the insect prey dries up quickly after digestion, which helps to preserve DNA. Water is the big enemy for DNA preservation, hence the famous pitcher plants would not have worked that well”, says Dr Andreas Fleischmann from the Botanical Natural History Collection and LMU Munich, senior author of the study.

To document what these plants fed upon, and to collect the leaves with the adhering insects for DNA studies in the lab, PhD student Thilo Krueger from Curtin University went on a 6,000 km journey to the remote Kimberley region of tropical northern Australia, where many of these unique sundews grow. Initially, this study was planned as a joint fieldwork project between researchers from Munich and Curtin universities two years ago, however travel restrictions due to the COVID-19 pandemic made this impossible. “The group of sundews we studied are all annual plants which are especially dependant on their insect prey. They only have a short time frame of a few months in the growing season to gain nutrients from their insect prey which they invest in growth, flowering and seed set to ensure survival through the dry season”, says Curtin’s Dr Adam Cross, a botanist and restoration ecologist.

The leaf samples were collected in sample tubes and stored in pure alcohol to preserve the DNA, and DNA sequences were analysed in the lab later on. In addition, Thilo Krueger made thousands of photographs of individual prey items sticking to the Drosera leaves studied, which were used as a control for the DNA metabarcoding data. “This way, we were able to compare the obtained results from the genetic prey barcoding with the photos of the actually captured insects for each leaf of each sundew species studied. And the results were astonishing: we could match every single prey item we documented in the photographs to a DNA barcode, which gave us confidence in the DNA metabarcoding identification of the insects.”, says Thilo Krueger. Of course, obvious false-positives could also be identified by this photographic plausibility control. For example, some bees and wasps detected by the metabarcoding could have freed themselves from the leaves, leaving traces of DNA behind on the leaf, or they could have been present in the stomach contents of spiders which were then itself caught by the sundew. This method of DNA metabarcoding is so sensitive that it even detected these tiny amounts of DNA of insects that are not obvious to the researchers from field examination and macro photographs. “Hence, our study of carnivorous prey spectra using genetic DNA fingerprints from the captured insects resembled reconstructing a crime scene. Just that our crime scene investigation was about finding out what a set of carnivorous plants had for lunch”, says Andreas Fleischmann. The results of their studies were just published in the scientific journal Scientific Reports.