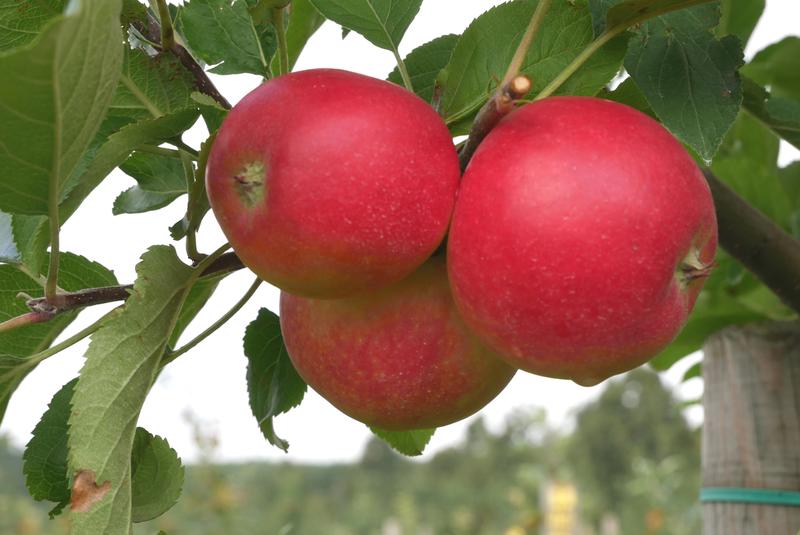 In a few years, apples that are officially deemed allergy-friendly will be avaiable supermarkets. The apples are a result of a project in which researchers in cooperation with the Züchtungsinitiative Niederelbe (ZIN), an initiative for breeding apple varieties, have successfully developed two varieties of apples, which are officially recognized as being allergy friendly. This is the first time apple varieties have been awarded an ECARF Seal by the European Center for Allergy Research Foundation.

As head of the fruit-growing department at the Osnabrück University of Applied Sciences, Prof. Werner Dierend is responsible for the development of the new allergy-friendly apple varieties. He and the other scientists involved were able to draw on more than 700 varieties of apples from the ZIN breeding program and the ultimate success of the project was made possible by the utilization of expertise from various disciplines.
“Since it is known that different varieties have varying allergen potential, we were very confident that in this pool of varieties we would come across one or perhaps several, which are allergy-friendly,” says Prof. Dierend. The next step was to send the samples from Osnabrück to the Technical University of Munich (TUM), where they were analyzed for allergens.

Currently, four families of apple allergens are known, two of which are considered less import. “The majority of apple allergy sufferers in Northern and Central Europe as well as in North America react to the allergen Mal d 1. This protein has a very similar molecular structure to the allergen Bet v 1 in birch pollen. Hence, birch pollen allergy sufferers often also experience unpleasant side effects from eating apples,” explains Wilfried Schwab, Professor of Biotechnology of Natural Products at the TUM.
Based on this information, Prof. Schwab and his team examined a total of 700 different ZIN varieties of apples for their MAL d 1 content. The apple varieties that had a particularly low allergen content were sent to Prof. Karl-Christian Bergmann, Charité – Universitätsmedizin Berlin university hospital, where Bergmann and his team performed oral provocation tests in which apple allergy sufferers under medical supervision consumed first 30 grams, and later 100 grams of fresh apple samples. Typical symptoms such as itching, tingling in the mouth, and swelling of the lips, tongue and oral mucosa were then rated on a three-point scale according to their intensity.
19 ZIN varieties were tested in the first year, and in the following year 22 were tested (17 of which were tested for the second time). Although the comparative apple variety “Santana” is classified as allergy-friendly, it was found that some of the ZIN varieties tested are even better tolerated. Still, factors other than variety can influence allergen potential, and apple allergy sufferers react individually, so tests have to be repeated over a period of several years.

“Despite precise investigations, it may never be possible to develop completely allergen-free apples. But, allergy-friendly apples have, for the first time, already made it possible for many allergy sufferers to bite into an apple without negative consequences,” says Prof. Schwab.
The new apple varieties, which are still currently called ZIN 168 and ZIN 186, have a red fruit surface. The apples of the ZIN 168 variety are sweet, juicy, and tasty with a firm and crisp flesh. They have a medium red color and are medium to large in size. The ZIN 186 apples are predominantly large, crisp and juicy, and have a slight predominance of sweetness.
The scientists are optimistic that the two allergy-friendly apples will be on supermarket shelves in 2025.