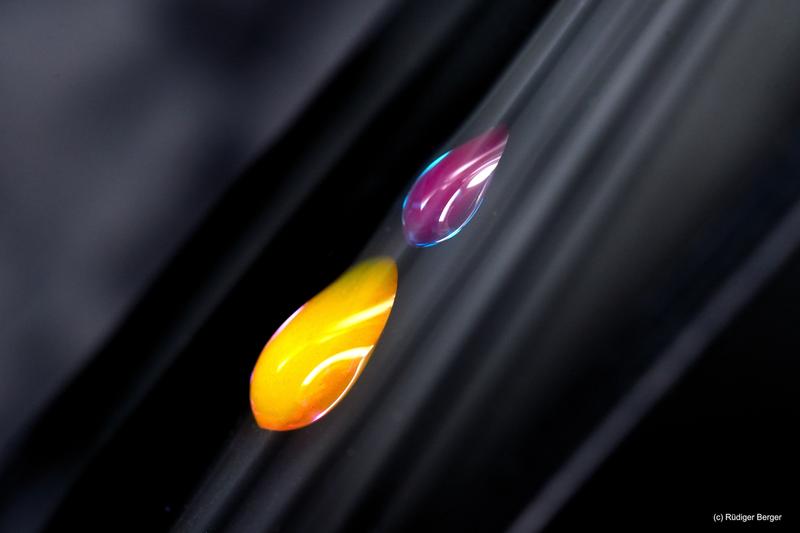 Something as simple as the motion of water drops on surfaces should actually be understood - one would think. In fact there are still numerous unanswered questions about the forces acting on a sliding droplet. A team of researchers from the Max Planck Institute for Polymer Research in collaboration with colleagues from TU Darmstadt has now discovered: In addition to surface energy and viscous friction within the droplet, electrostatics also play a significant role. The results were recently published in the journal Nature Physics.

Raindrops hit the car window and the wind pushes the drops to the side. Even today, no one has been able to precisely predict how the drops move on the windshield. Yet such an understanding is important in numerous areas, such as autonomous driving: For example, cameras installed in the windshield are supposed to keep an eye on the road and the traffic situation - for this, the surface of the windshield must be designed in such a way that the drops are completely blown down by the airstream and the view remains clear even in the rain. Other examples with the opposite sign are applications where drops need to stick to surfaces, such as spray paint or pesticides.

"Until now, it was assumed that the surface coating was responsible for how the droplet moves on a surface - that is, the first few molecular layers," says Prof. Hans-Jürgen Butt, who is director of the "Physics of Interfaces" department at the Max Planck Institute for Polymer Research. For example, it depends on the surface whether a spherical or a flat droplet shape is formed. If the drop likes the surface, it presses itself flat onto it to make as much contact as possible. If it does not like the surface, as in the case of the well-known lotus effect, it curls up. It was also clear that when a droplet moves, viscous friction - i.e. friction between the individual water molecules - occurs within the droplet, which also influences its movement.

Electrostatics cause differences in velocity
The team of researchers at the MPI for Polymer Research found that neither capillary nor viscoelastic forces can explain the differences in the speed at which droplets move across different surfaces. Questions were raised in particular by the fact that the droplets run at different speeds on different substrates - even if these substrates have an identical surface coating, where no differences would be expected. The researchers therefore first introduced a mysterious "extra force." To track it down, Xiaomei Li, a Ph.D. student in Hans-Jürgen Butt's department, organized a drop race. "I filmed the drops on different substrates, extracted velocity and acceleration profiles from their motion, calculated out the forces that were already known to calculate the force that we had not yet had a look at," she explains.
The astonishing result: the calculated force agrees with an electrostatic force that the researchers first described in a model a few years ago. "By comparing the experimental results with this numerical model, we can explain previously confusing droplet trajectories," says Jun.-Prof. Stefan Weber, a group leader in Butt's department.

If previously neutral droplets slide over an insulator, they can become electrically charged: So electrostatics plays a significant role there. On an electrically conductive substrate, on the other hand, the droplet immediately releases its charge back to the substrate. "The electrostatic force, which no one had previously considered, therefore has a major influence: it must be taken into account for water, aqueous electrolytes and ethylene glycol on all hydrophobic surfaces tested," Weber summarizes. The research team has now published the results in the journal Nature Physics. These results will improve the control of droplet motion in many applications ranging from printing to microfluidics or water management to power generation via droplet-based mini-generators.