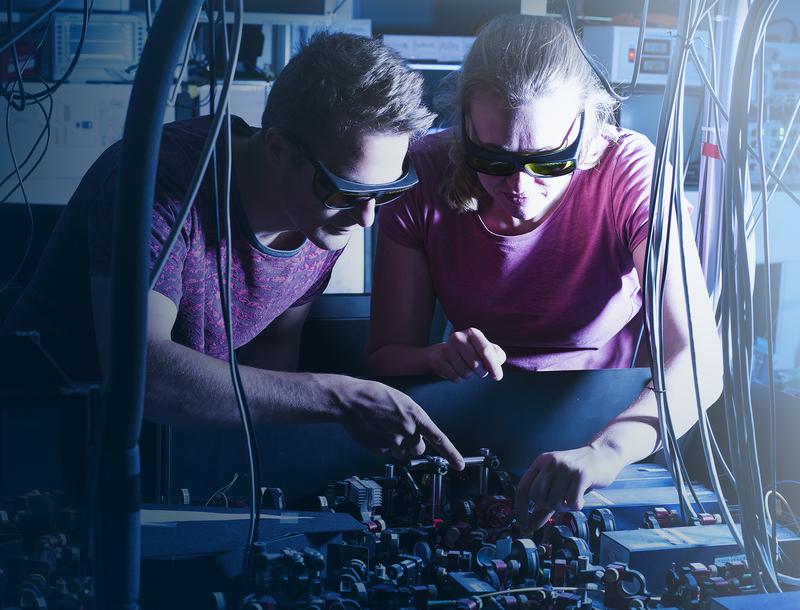 Europe’s most important award for precision measurement is going to researchers in Düsseldorf and Garching.

This year’s Helmholtz Prize is honoring two important contributions to physics, one relating to fundamental research and one to applied research, but both in the field of optics. The Helmholtz Prize is the most important award in the realm of metrology, the science of measurement. In the category of fundamental research, the prize goes to Soroosh Alighanbari and his colleagues in Prof. Schiller’s Research Group at the Heinrich Heine University Düsseldorf for the development of a new method of precision spectroscopy for exploring fundamental questions of physics. The Helmholtz Prize in the category of applied metrology has been won by Nathalie Picqué and Edoardo Vicentini of the Max Planck Institute of Quantum Optics in Garching. Their work has significantly expanded the possibilities of digital holography through the use of frequency combs. The awards ceremony for both prizes, each endowed with 20,000 euros, will be held on 12 May 2022 during the international conference on “High-Precision Measurements and Searches for New Physics”. This conference is being organized as a Wilhelm and Else Heraeus Seminar and will take place at the Physikzentrum in Bad Honnef, Germany.

Precision spectroscopy for the fundamental questions of physics
Physicists seek answers to a number of fundamental questions: Are natural constants really constant? Is nature governed by four and only four forces? What is dark matter? Researchers hope to find the answers by studying simple quantum systems very meticulously. In recent years, a new family of such quantum systems has attracted particular attention: molecular hydrogen ions, the simplest of all molecules. One member of this family is the molecular ion HD+, which consists of one proton and one deuteron bonded by a single electron. As such, this is a very simple molecule that can on the one hand be used as a model system for more complex molecules and on the other serve as a convenient system for conducting fundamental research into the properties and interactions of the electron, the proton and the deuteron. Using this molecule, the Helmholtz Prize winners at the Heinrich Heine University Düsseldorf have developed and tested an innovative high-precision spectroscopy technique that can now be applied to other molecular ions. They further succeeded in enhancing the precision of some aspects of fundamental physics.

One characteristic shared by the vast majority of molecular ions is that cooling them directly with laser light is a complex and costly undertaking. But overcoming this challenge is well worth the effort because the precision spectroscopy of molecular ions promises to deliver insights that complement our knowledge of atoms and neutral molecules. In the early 2000s, researchers at Heinrich Heine University were the first to venture into this area of research. Their approach is to capture two ensembles of different ion types – one consisting of molecular ions and one of atomic ions – in a single ion trap. Here, the atomic ions are cooled by laser (as is done in optical atomic clocks and trapped-ion-based quantum computers) and they, in turn, cool the molecular ions through electrical interaction. This cooling dramatically slows the motion of the molecular ions, allowing their properties to be characterized with high accuracy.

Applying this method in its prize-winning work, the research group was able to make progress on four key fronts. First, they determined with unprecedented accuracy a combination of proton, deuteron, and electron masses (a combination of three fundamental constants). Second, they demonstrated a low-energy quantum physics test involving baryon motion that is ten times more accurate than previous tests. The group’s third achievement was to improve the bounds on the strength of a hypothetical fifth force between the proton and the deuteron. Finally, the group became the first to demonstrate a Doppler-free molecular electric quadrupole transition, attaining a line quality factor 40,000 times higher than previously achieved for molecular ions.

Fascinating holography – digital and more powerful than ever
All of us have seen holograms: on bank notes, in passports and in Star Wars! Holography is a powerful 3D photographic technique. Edoardo Vicentini and Nathalie Picqué of the Max Planck Institute of Quantum Optics (MPQ) in Garching have taken holography a step further by coupling it with frequency comb technology. This enables even better 3D imagery with previously unimagined properties and opens up new avenues in optical diagnostics.

An optical frequency comb generator emits a regular train of short laser pulses. Its spectrum consists of a large number of sharp, equally spaced spectral lines that together resemble a comb. Such frequency combs can be used to determine the frequency of light with high precision. For this invention, Theodor Hänsch, who heads the Laser Spectroscopy Division at MPQ, received the Physics Nobel Prize in 2005. Later, the MPQ group headed by Nathalie Picqué developed what is called dual-comb spectroscopy. This technique uses all of the spectral lines of a frequency comb to interrogate a sample over a broad spectral range and combines this with a second frequency comb having slightly difference spacing. The resulting interference pattern is then detected by the team using a fast photodetector.

With its new imaging technique known as hyperspectral digital holography, the group is expanding the application of this interference method to holographic imaging. The basic principle of using two frequency combs remains unchanged, but for holographic applications a camera is employed instead of a photodetector. The camera registers a spatial interference pattern that changes over time since the two lasers emit their pulses at different intervals. A computer calculates the radio frequency spectrum of the interference signal for each pixel. These spectra are then combined in a stack of digital holograms.

Dual-comb interferometers produce breathtaking results in spectroscopy and in ranging applications. The unique combination of broad spectral bandwidth, long temporal coherence and multi-heterodyne readout offers powerful new features for holography. The technique developed by Vicentini and Picqué is likely to conquer new frontiers in scan-free wavefront reconstruction and three-dimensional metrology. Beyond that, it may have potential applications in microscopy for biological samples.

Commenting on the prizewinners, Prof. Dr. Joachim Ullrich, who at the end of April 2022 is retiring from his posts of President of the Physikalisch-Technische Bundesanstalt (PTB) and Chair of the Helmholtz Fund, stated: “I am impressed by the extraordinary scientific innovation demonstrated by both groups.” His designated successor, Prof. Dr. Cornelia Denz, who will take over both of Ullrich’s offices on 1 May 2022, added that “these two papers reveal just how broad the spectrum covered by optics is – with optics being one of the most important fields of physics in the 21st century.”

The prize
The Helmholtz Prize is awarded by the Helmholtz Fund for outstanding scientific and technological research in the field of precision measurement in physics, chemistry and medicine. The prize is awarded in two categories, fundamental research and applied metrology, with each prize endowed with 20,000 euros. The awards ceremony can this year once again be held as a face-to-face event and will take place on 12 May 2022 as part of the international Wilhelm and Else Heraeus Seminar on “High-Precision Measurements and Searches for New Physics” at the Physikzentrum in Bad Honnef. The event will be streamed live.
(es/ptb)