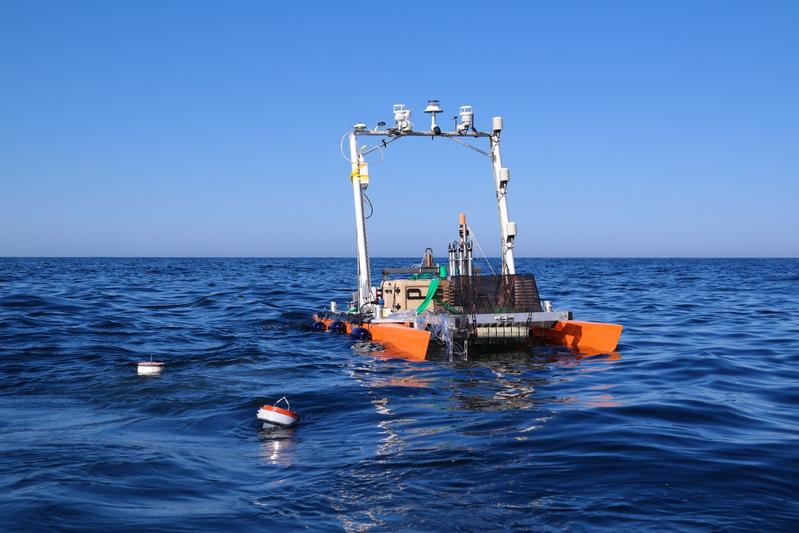 A big success for Oldenburg's environmental and marine research: the DFG approves funding for new research group on exchange processes in the microlayer between oceans and atmosphere.

The uppermost layer of the oceans is a very special but as yet little explored part of the planet. Less than a millimetre thick, this surface layer functions like a skin, regulating the exchange of gases, energy and momentum between the ocean and the atmosphere. To study the complex biological, chemical and physical interactions within this "sea-surface microlayer" is the goal of a new research group led by chemical oceanographer Prof. Dr. Oliver Wurl from the University of Oldenburg's Institute for Chemistry and Biology of the Marine Environment (ICBM) in Wilhelmshaven. The German Research Foundation (DFG) and the Austrian Science Fund (FWF) will provide up to 4,1 million euros in funding for the project over the next four years.

"With its approval for this project the DFG once again acknowledges the value of the University of Oldenburg's successful and top-level environmental and marine research," said the University's President Prof. Dr. Ralph Bruder. "The interdisciplinary collaboration led by Oliver Wurl will decisively advance our understanding of the processes in the uppermost ocean layer."

Besides Wurl's research group other researchers at the ICBM are also involved in the DFG Research Unit, which is titled Biogeochemical Processes and Air-Sea Exchange in the Sea-Surface Microlayer (BASS). Project partners from the GEOMAR Helmholtz Centre for Ocean Research Kiel, the Helmholtz-Zentrum hereon in Geesthacht, the Universities of Kiel, Hamburg and Vienna (Austria) and the Leibniz Institute for Tropospheric Research in Leipzig will also take part in the research.

The scientists see the surface layer as a biogeochemical reactor – a place where unusual substances are produced due to the special conditions that prevail there. The project focuses on the biological, chemical and physical interactions in the microlayer. Its inhabitants range from single-celled algae and bacteria to more complex unicellular organisms and small animals. "The living conditions are tough," notes Wurl, who is spokesperson of the Research Unit. "These organisms must withstand high levels of UV radiation and strongly fluctuating salt concentrations and temperatures."

A thin biofilm exhibiting gel-like properties often forms on the sea surface as protection. It contains a complex mixture of organic substances such as certain polysaccharides, proteins and fatty compounds which, because of the high energy input of the solar radiation, react with each other in unusual ways. "Small-scale turbulences send these molecules downwards into deeper water layers, where they are then incorporated into various material cycles and assume important functions," Wurl explains. The microlayer is clearly distinct from the other areas of the ocean and influences the global climate due to its unique location.

To study processes in this wafer-thin layer in more details, the team will conduct field studies and lab experiments in the wind-wave tank at the University of Hamburg as well as in the "Sea Surface Facility" of the ICBM at its location in Wilhelmshaven. The heart of this outdoor facility is a 10,000-litre basin with an integrated filtration system under a retractable roof. The basin can be filled with natural water from the adjacent Jade Bay. The "Sea Surface Facility" allows to simulate aquatic ecosystems under controlled conditions.

For the summer of 2024, a three-week measuring campaign on two research vessels in the North Sea near Helgoland is planned, with the participation of all the project partners. During this campaign the team will test innovative optical methods for measuring short-term changes in biological, chemical and physical conditions in the boundary layer. For various types of measurements, and to take samples from the sea surface, the researchers will use the ICBM's new autonomous research catamaran, as well as small drifting buoys. They will then analyse the samples using various methods to determine, among other things, what species, organic substances and numbers of cells are present in the seawater.

In addition, the project partners plan to cultivate various microbes that are typically found in the surface layer and then investigate which substances these organisms secrete. For further experiments, the mesocosms will be filled with water from the North Sea, into which blooms of various microalgae will be triggered. The team will then investigate which substances accumulate in the surface layer and develop models to predict these accumulations.

In other sub-projects, the scientists will take a closer look at the chemical reactions in the boundary layer and the influence of sunlight, as well as the exchange of energy and trace gases between the atmosphere and the ocean. Another team of researchers will investigate what role small-scale churning movements triggered by variations in density play in the transport of organic substances and gases between the sea surface and deeper water layers.