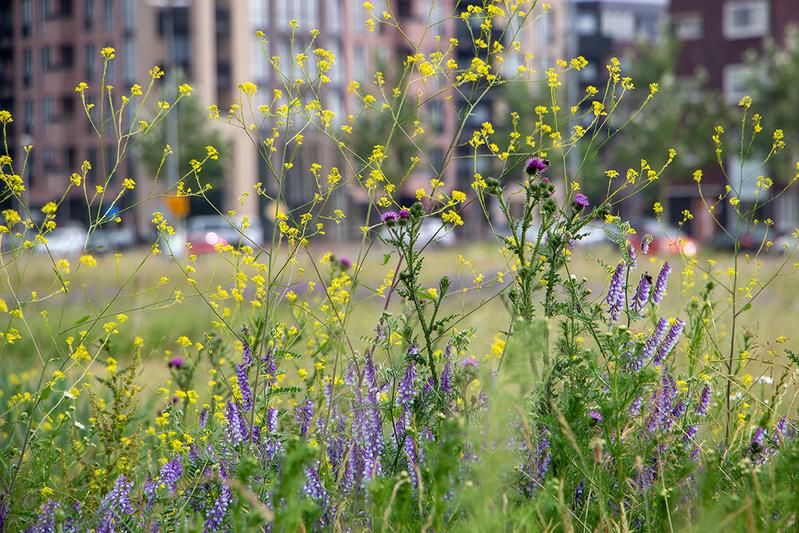 Halle/Leipzig. Declining native species could be planted in urban green spaces. Researchers from the German Centre for Integrative Biodiversity Research (iDiv), the Martin Luther University Halle-Wittenberg (MLU), Leipzig University and other institutions describe how to use this great potential for species protection. In their most recent study, published in the journal Nature Sustainability, they recommend practical conservation gardening methods in a bid to restructure the horticultural industry and reverse plant species declines.

Despite global efforts to protect biodiversity, many plant species are still declining. In Germany, this includes 70 percent of all plant species, with almost a third (27.5 percent) threatened, and 76 species are already considered extinct. Much of this loss can be attributed to the decline in natural habitats, in part due to increasing urbanisation. Ten percent of the total area of Germany, for example, is settlement area.

However, it is precisely these settlement areas that hold enormous - albeit untapped - potential for nature conservation. After all, these areas include millions of private gardens, balconies and green roofs, as well as parks and other public green spaces. Researchers from iDiv, the Universities of Halle and Leipzig and other institutions propose using these potentially available areas for conservation gardening.

This horticultural practice specifically encourages the planting of declining native species. Native plants are plants that occur naturally in their habitat, where they have adapted to specific environments and have co-evolved with other species. Although critical to the functioning of our ecosystems, native plants are most affected by decline and are in need of conservation. “Gardeners have always played a role in distributing plant species, so why not also help bring back the many native species that are disappearing,” says lead author Josiane Segar, researcher at iDiv and MLU. Public and private gardens and green spaces could play a central role in conserving plant diversity, but this would require a major rethinking of the horticultural industry in order to do so.”

According to the researchers, the economy for conservation gardening, as well as the ability to redesign the industry already exists. Horticulture is a commercially important sector in many countries: In Germany, for example, 8.7 billion euros were spent on plants in 2018, and the trend is rising. During the corona pandemic, per capita spending on plants increased by a record-breaking 9 percent. Furthermore, public awareness of the decline in biodiversity has risen sharply. Planting declining native species would also have clear advantages. Many of them are adapted to dry soils and would cope better with droughts in the wake of climate change than many of the species currently used in gardening. The authors posit that these factors could lead to increased demand for conservation gardening appropriate plants if they could be made widely available in garden centres.

The researchers, therefore, propose that a key approach to promoting conservation gardening would be to create a stronger link between the mainstream horticultural industry and the domestic native seed market. Certified native seed production and marketing should be promoted through financial mechanisms and policy support, e.g., in the form of reduced VAT. Product labels in garden centres could help to point out the benefits of conservation gardening and influence the demand curve. Appropriate criteria for awarding public contracts to horticultural companies could also help encourage the use of declining native plant species in public green spaces. Funding applied research to develop region-specific lists of declining plant species, as well as planting concepts and seed mixtures for these species could foster a science-driven approach to gardening. In addition, key players such as botanical gardens, universities, nature conservation associations, neighbourhood cooperatives and public administrative bodies could spread essential knowledge about the cultivation and care of declining native plants.

”Conservation gardening would facilitate a targeted, structural change in conventional gardening and horticulture. Large scale implementation does not require extensive changes to the existing conservation architecture,” says senior author Dr Ingmar Staude from iDiv and Leipzig University. “In fact, it uses existing, economically viable structures to encourage the use of declining species when planting green spaces. In an increasingly urban world, this could foster a tangible and inclusive form of nature conservation for citizens.”