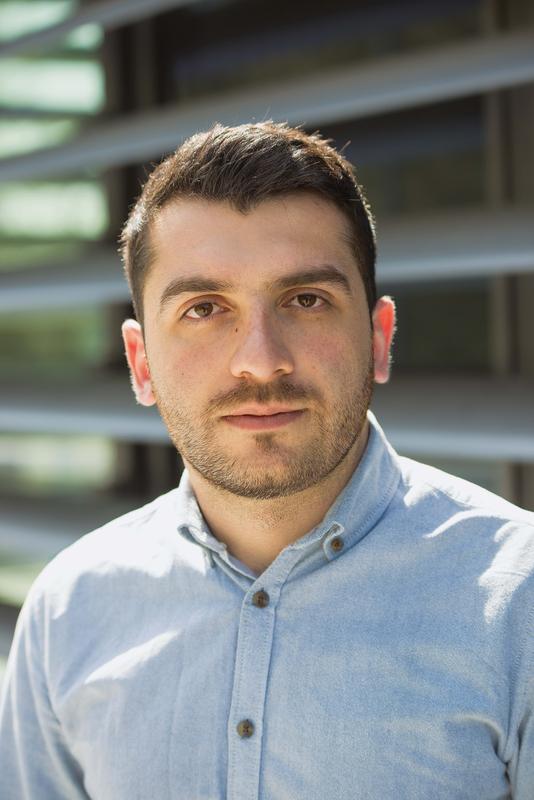 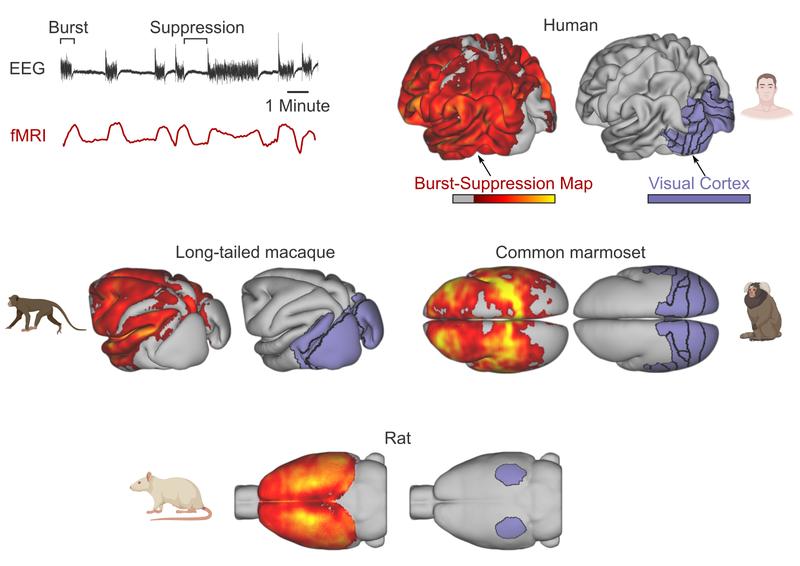 Modern anesthesia is one of the most important medical achievements. Whereas before, patients had to suffer hellish agonies during every operation, today anesthesia enables completely painless procedures. One feels nothing and can remember nothing afterwards. It is already known from electroencephalography (EEG) studies on patients that during anesthesia the brain is put into a deep sleep-like state in which periods of rhythmic electrical activity alternate with periods of complete inactivity. This state is called burst-suppression. Until now, it was unclear where exactly this state happens in the brain and which brain areas are involved. However, this question is important to better understand the phenomenon and thus how the brain functions under anesthesia. Researchers from the Functional Imaging Unit at the German Primate Center (DPZ) – Leibniz Institute for Primate Research in Göttingen have used functional magnetic resonance imaging (fMRI) to study the precise spatial distribution of synchronously working brain regions in anesthetized humans, long-tailed macaques, common marmosets and rats. They were able to show for the first time that the areas where burst-suppression is evident differ significantly in primates and rodents. While in rats large parts of the cerebral cortex synchronously show the burst-suppression pattern, in primates individual sensory regions, such as the visual cortex, are excluded from it (eLife).

“Our brain can be thought of as a full soccer stadium when we are awake,” explains Nikoloz Sirmpilatze, a scientist in the Functional Imaging Unit and lead author of the study. “Our active neurons are like tens of thousands of spectators all talking at once. Under anesthesia, however, neuronal activity is synchronized. You can measure this activity using EEG as uniform waves, as if all the spectators in the stadium were singing the same song. In deep anesthesia, this song is repeatedly interrupted by periods of silence. This is called burst-suppression. The deeper the anesthesia, the shorter the phases of uniform activity, the bursts, and the longer the periodically recurring inactive phases, the so-called suppressions.”

The phenomenon is caused by many different anesthetics, some of which vary in their mechanisms of action. And burst-suppression is also detectable in coma patients. However, it is not known whether this condition is a protective reaction of the brain or a sign of impaired functioning. It has also been unclear where in the brain burst-suppression occurs and which brain areas are involved, as localization by EEG alone is not possible.

To answer this question, Nikoloz Sirmpilatze and the researcher team used the imaging technique of fMRI. The method makes blood flow changes in the brain visible. The increased activity of neurons in a particular area of the brain leads to an increase in metabolism, followed by an increased blood and oxygen supply at this location, which is ultimately visible in the fMRI image.

In the first part of the study, the researchers established a system to evaluate fMRI data in humans, monkeys and rodents in a standardized manner using the same method. To do this, they used simultaneously-measured EEG and fMRI data from anesthetized patients that had been generated in a previously conducted study at the Technical University of Munich. “We first looked to see whether the burst-suppression detected in the EEG was also visible in the fMRI data and whether it showed a certain pattern,” says Nikoloz Sirmpilatze. “Based on that, we developed a new algorithm that allowed detecting burst-suppression events in the experimental animals using fMRI, without additional EEG measurement.”

The researchers then performed fMRI measurements in anesthetized long-tailed macaques, common marmosets and rats. In all animals, they were able to detect and precisely localize burst-suppression as a function of anesthetic concentration. The spatial distribution of burst-suppression showed that in both humans and monkey species, certain sensory areas, such as the visual cortex, were excluded from it. In contrast, in the rats, the entire cerebral cortex was affected by burst-suppression.

“At the moment, we can only speculate about the reasons,” says Nikoloz Sirmpilatze, who was awarded the German Primate Center's 2021 PhD Thesis Award for his work. “Primates orient themselves mainly through their sense of sight. Therefore, the visual cortex is a highly specialized region that differs from other brain areas by special cell types and structures. In rats, this is not the case. In future studies, we will investigate what exactly happens in these regions during anesthesia to ultimately understand why burst-suppression is not detectable there with fMRI.”

Susann Boretius, head of the Functional Imaging Unit and senior author of the study adds: “The study not only raises the question of the extent to which rodents are suitable models for many areas of human brain research, especially when it comes to anesthesia, but the results also have many implications for neuroscience and the evolution of neural networks in general.”