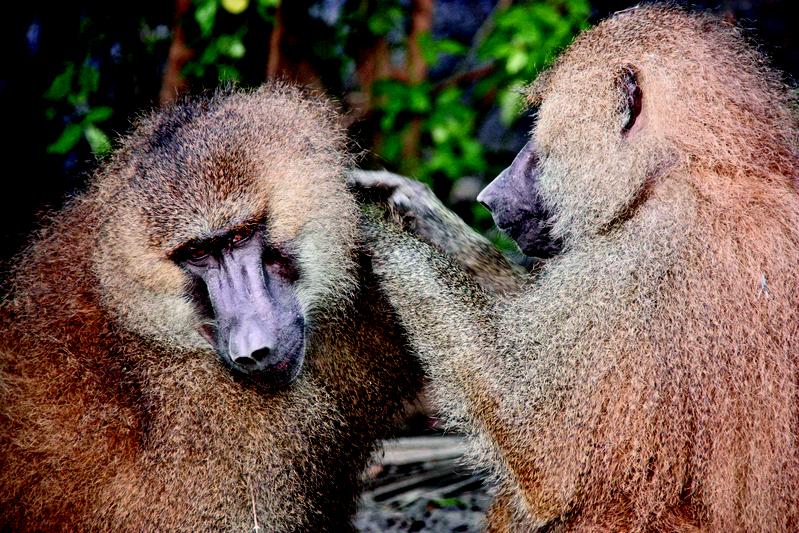 Close friendships among males are rare in the animal kingdom, as males usually compete for rank and access to females. However, male friendships can also be beneficial for male reproduction, as friends can provide support in climbing the rank ladder or defending females from other males. Scientists from the German Primate Center (DPZ) - Leibniz Institute for Primate Research - investigated the benefits of male friendships in wild Guinea baboons in Senegal. Guinea baboons are known for strong bonds among males and a lack of a clear male rank hierarchy. The researchers investigated whether males with many friends were more attractive to females because they may provide females and their offspring with better protection against predators. Having many friends, however, was not related to male reproductive success. Instead, once males associated with females and began to sire offspring, they spent less time with other males. Although males in their prime maintained some social contact with other males, they drastically adjusted their investment of social time according to their life history stage to maximize reproductive success (Proceedings of the Royal Society B).

Male friends may provide emotional support; they can help in the defense of females against rivals or the acquisition of high social status. But everything changes once females enter the game. That much is true in Leonhard Bernstein’s “West Side Story” as in wild Guinea baboons. Federica Dal Pesco, a postdoctoral researcher in the Cognitive Ethology Laboratory at the German Primate Center (DPZ) studied the link between male friendships, mutual support and reproductive success in free-ranging Guinea baboons at the DPZ field station Simenti in Senegal.

A tolerant multi-level society
Guinea baboons live in a tolerant multi-level society with core units consisting of one male and one to six females and their young. Several of these core units and bachelor males form a “party.” Two to three “parties” team up as a “gang”. Nearly all offspring are fathered by the male of the respective core unit; bachelor males are usually not sexually active. Guinea baboons are remarkably socially tolerant. Males maintain strong bonds with other males and have no clear rank hierarchy. Females freely choose their sexual partners, staying with the same male for several weeks up to several years.

Four years of behavioral observations
Federica Dal Pesco and her colleagues analyzed the social behavior of 30 males and determined the paternity for 50 infants sired over four years. The animals comprise a study population of over 400 individuals living near the DPZ field station Simenti in the Niokolo-Koba National Park in Senegal. The population has been under study since 2010, and the animals are accustomed to human observers following them on foot. The critical question of the present study was whether males with many friends might be able to attract more females because of their ability to provide ‘male services’, such as defense against predators.

Allocating time wisely
Contrary to predictions, there was no evidence that males with many friends would be more attractive to females. Instead, males adjusted their social time with the number of females they were associated with: the more females they had in their unit, the less time they spent with their male friends. Furthermore, although friends were more likely to support each other in coalitions, this support was unrelated to reproductive success. “It is mostly the young and old bachelor males who have ample time to hang out with other males, potentially ensuring in this way that they can stay in the group,” said Federica Dal Pesco, lead author of the study. “But once males become attractive to females, the males shift their attention to females to increase their reproductive success,” Federica Dal Pesco noted. “What we don’t know yet, is whether male friendships help to attract the first females earlier or maintain the status as a reproductively active male for longer,” Julia Fischer, the study’s senior author, added. “To answer this question, we need many more years of observation,” she concluded.

You will also find the press release on our website. Please send us a reference copy or link in case of publication.

The German Primate Center GmbH (DPZ) - Leibniz Institute for Primate Research conducts biological and biomedical research on and with primates in infection research, neuroscience and primate biology. The DPZ also maintains four field stations in the tropics and is a reference and service center for all aspects of primate research. The DPZ is one of the 97 research and infrastructure facilities of the Leibniz Association.