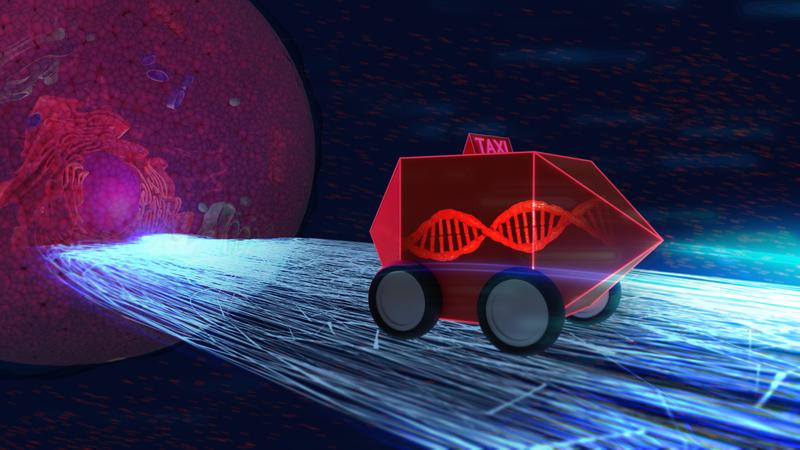 Viruses help researchers to introduce genes into cells so that they can produce active pharmaceutical ingredients, for example. Special peptides stimulate the process. Until now, however, the efficiency increase was poorly understood. A team of researchers from the MPI for Polymer Research, the University of Ulm, the British University of Cambridge and Wageningen University in the Netherlands has now shed some light on the subject and also developed a cost-effective peptide. The team published its results in the journal "Advanced Functional Materials".

Biochemists need "cabs" of a special kind: packed with genetic information, they are supposed to enter cells and stimulate them to put their actual task aside and produce desired active substances instead, such as insulin. Such molecular delivery services are also of interest for novel therapeutic approaches. One example is Car-T cell therapy, for which initial approaches have already been developed. This involves taking a few T cells from cancer patients, reprogramming them in the Petri dish and returning them to the body - where they then specifically kill the tumor cells. Here, too, an efficient gene transporter into the T cells is required in order to be able to reprogram them as extensively as possible. Viruses offer themselves as such "cabs" - after all, they are champions at crossing the cell membrane. Fiber-forming peptides, i.e. short sequences of amino acids that dock onto viruses via electrostatic bonds, further enhance this ability. Research has yet to find a satisfactory answer to the questions of why this is the case and which peptides best increase the efficiency of transport.

Peptide database provides fundamental understanding
Researchers at the MPI for Polymer Research have now been able to solve this puzzle together with colleagues from the Universities of Ulm, Cambridge and Wageningen University. "For the first time, we were able to correlate physicochemical parameters of the peptides with infectivity, i.e. with the ability of the viruses to overcome the cell wall," explains Christopher Synatschke, group leader in Tanja Weil's research group at the MPI for Polymer Research. The researchers created the basis for these findings with a peptide database. "If you put the peptides in an aqueous solution, long fibers form from millions or billions of individual molecules - the so-called supramolecular peptide nanofibrils. We have tried to influence this structure formation by systematically exchanging amino acids, shortening peptides and changing physicochemical parameters such as hydrophilicity - i.e. ‘water love’," explains Synatschke. Under which conditions do nanofibers form that are particularly efficient in supporting the penetration of viruses into cells, and when, on the other hand, do nanofibers not form? Which parts of the molecule are essential? Can fiber formation be improved via certain physicochemical parameters? The team compiled all of these data in the database - and thus, step by step, acquired the knowledge of how significantly more efficient peptide structures can be generated.

The important parameters: First of all, the peptides must form fibers at all. Next, the fibers need a positive surface charge so that they are attracted to viruses and cell surfaces and can thus efficiently bring the virus to the cell surface. And, most interestingly, the secondary structure of the fibers, as known, for example, from the double helix structure of the genetic material, a somewhat more obscure one is the ß-sheet structure. It indicates, so to speak, how the fibers are entangled. The simplified rule of thumb is: the more fiber sections are arranged in a ß-sheet structure, the more efficiently the fibers help the viruses to cross the cell membranes.

The research team applied the knowledge they gained directly. "We were able to produce a peptide that is just as efficient as an already known peptide, but instead of consisting of twelve amino acids, it consists of only seven and can therefore be produced much more cheaply," explains Synatschke. The researchers published their results in the journal Advanced Functional Materials.

Opposite peptide properties are also interesting
The database is also interesting for numerous other questions. For example, the findings could be used to produce peptides that bind to viruses but not to cells - they would thus reduce the viruses' ability to penetrate cells instead of increasing it. In this way, the peptides could reduce infectivity, which may enable new approaches to virus-related diseases such as HIV. However, the researchers still have a long way to go before they reach that point.