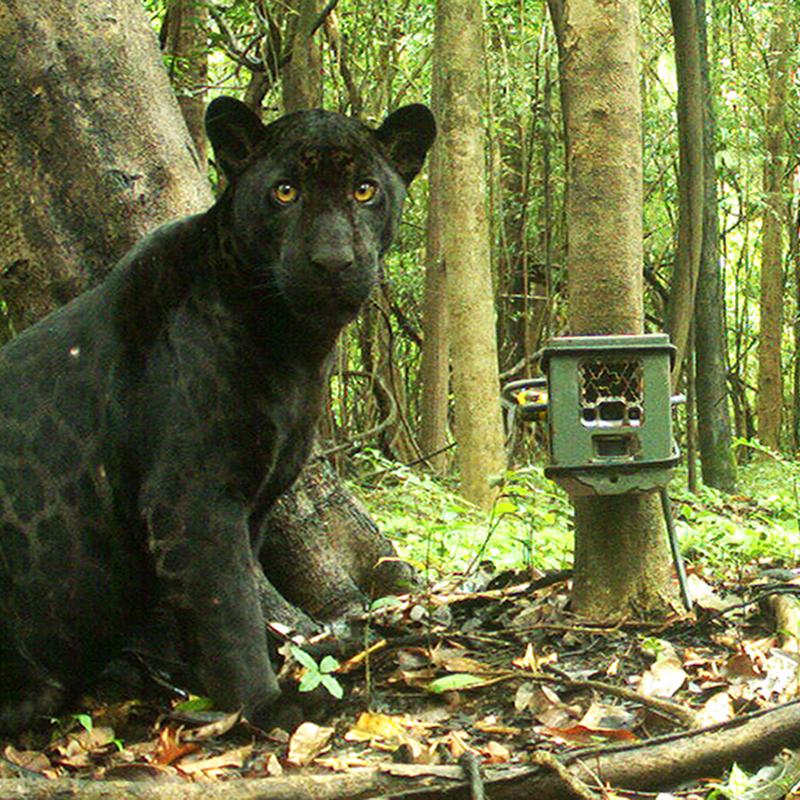 Manaus/São Paulo/Jena/Leipzig. An international team of researchers has published the largest collection of data from camera traps on Amazonian rainforest animals. It will improve research on the abundance, diversity and habitat conditions of jaguars, toucans, harpy eagles and many other endangered rainforest species and contribute to their protection. 147 scientists from 122 research institutions and nature conservation organisations collaborated under the leadership of the German Centre for Integrative Biodiversity Research (iDiv) and the Friedrich Schiller University of Jena to build this new database, which is based on camera trap photos. It has now been published in the journal Ecology.

In the pictures, it sometimes looks as if the animals have deliberately posed for a photo shoot. It seems that animals actually like to fall into these kinds of traps: Wildlife cameras equipped with sensors that trigger when animals approach. Jaguars, toucans, harpy eagles, ocelots, tapirs, peccaries and many more have already been photographed with these camera traps in the Amazon Basin.

An international research team has now, for the first time, compiled and standardised data from numerous camera trap studies from different regions of the Amazon. This has resulted in the most comprehensive database to date on mammal, bird and reptile species in this region. A total of 120,849 records on 289 species from 2001 to 2020 were collected and standardised. The data provides information from 143 study sites across the Amazon Basin – an area of nearly 8.5 million square kilometres covering states in Brazil, Bolivia, Colombia, Ecuador, French Guiana, Peru, Suriname and Venezuela.

“Our database significantly improves the information situation on vertebrates in the Amazon region,” says Ana Carolina Antunes, doctoral researcher at the University of Jena and member of the iDiv research group Theory in Biodiversity Science. Until now, knowledge about the number, diversity, distribution patterns and behaviour of species in this territory has been patchy and therefore scarce. The information was scattered among many individual publications, grey literature and unpublished raw data. This database now allows larger scale analyses of temporal and spatial changes in population densities and the residence patterns of the animals. “It's not just that the cameras allow you to take beautiful photos of the animals. They also provide further important data from which it is possible to deduce how climate change and human-induced landscape changes affect animals and their habitats on a large scale. This knowledge can help to develop protective measures for animal species that are particularly threatened by these changes,” says Antunes.

For example, the database can help keep the jaguar protected in the Amazon Forest by providing more precise habitat analyses; statements about where habitats best meet the jaguars' requirements and where they do not. The results of the analyses can be used for mapping and designating protected areas. They also confirm the importance of already designated protected areas for the jaguar and its prey. The previously fragmented data, which covered only smaller areas, allowed very sparse statements to be made about the large-scale habitats that jaguars require. The database also improves possibilities for comparing population densities between protected and non-protected areas. And what data analysis makes possible for the protection of the jaguar naturally also applies to ocelots, tapirs, peccaries and many more.

In order to be able to build this database, Antunes, together with five other scientists from Brazilian research and conservation organisations, established a collaborative network. A total of 147 researchers from nearly 122 institutions participated. The importance of this huge effort is also demonstrated by the broad financial support for this work and the participation of a total of 32 institutions. “In addition to this strong institutional support, the development of the database was mainly based on organisations’ and local communities’ knowledge and support on the ground, as Antunes points out. “They are key to preserving the Amazon Forest and associated climate, thus guaranteeing the provision of essential ecosystem services to society.”

The Amazon camtrap is part of Amazon Series of data papers, an initiative started in 2017 with the Atlantic Series, Brazil Series and Neotropical Series, led by Milton Ribeiro and Mauro Galetti, from the São Paulo State University (UNESP), Brazil. Ribeiro, who is also last author of this study adds: “Altogether, these data allow us to advance our potential of addressing important questions related to conservation and public policy development”.