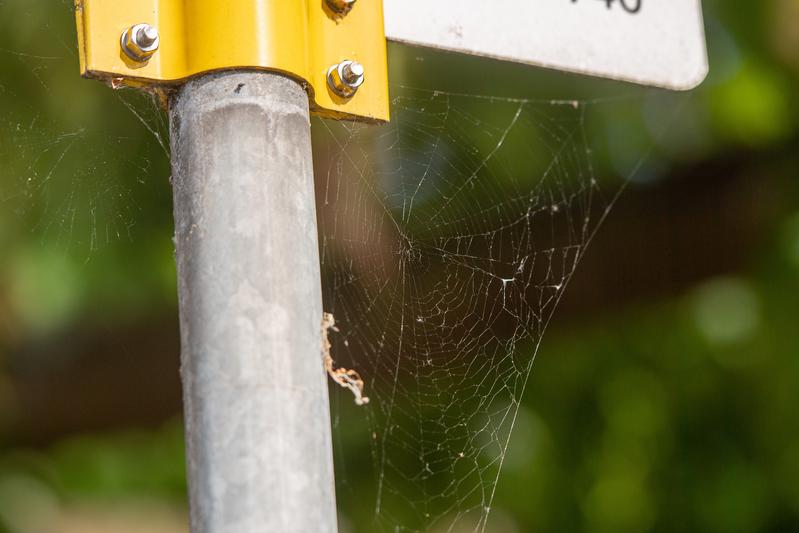 Researchers at the University of Oldenburg have studied microplastics in spider webs for the first time. The results provide first insights into the varying levels of microplastic contamination of urban air.

Flies, mosquitoes, dust and even microplastics – spider webs catch things flying through the air. Researchers at the University of Oldenburg have now for the first time examined the webs for the smallest plastic particles – on inner-city streets with varying levels of traffic. They found mainly the plastic PET, presumably from textiles, as well as particles from the abrasion of car tyres and polyvinyl chloride (PVC). The amounts of plastic particles found depended on the location. Spider webs, the team concludes, are a simple and inexpensive means of monitoring air pollution by microplastics in the city and identifying particularly polluted areas. The findings have been published in the journal Science of the Total Environment.

"Spiders are found all over the world, including in cities. Their sticky webs are an ideal trap for anything that floats through the air," explains Dr Barbara Scholz-Böttcher. The microplastics expert at the University's Institute of Chemistry and Biology of the Marine environment (ICBM) was head of the study. Previous studies have shown that pollutants such as heavy metals or magnetic particles get stuck in the webs, she adds. "However, no one has yet examined spider webs for microplastics," says the geochemist – even though the air we breathe is increasingly contaminated with microplastics.

To find out whether microplastics can be detected in spider webs and whether there are certain distribution patterns, Rebecca Süßmuth, student of Environmental Sciences, collected spider webs from the upper area of semi-covered bus stops at different times for her thesis. The bus stops were located along roads with different levels of traffic in the city of Oldenburg in north-western Germany. The samples were prepared in the laboratory and the particles adhering to the webs were concentrated on filters.

The team first examined the filters microscopically and found, for example, fibres presumably stemming from textiles, as well as soot particles. They then heated the samples at very high temperatures in the absence of oxygen (pyrolysis) and separated the resulting plastic fragments using a gas chromatograph. A downstream mass spectrometer made it possible to assign and determine the different types of plastic.

The result: "All the spider webs were contaminated with microplastics," reports Isabel Goßmann, who was involved in the study as part of her PhD-thesis. In some cases, the plastic content even accounted for a good tenth of the total weight of a web. Almost 90 per cent of the plastic consisted of PET (polyethylene terephthalate), PVC and material from car tyres. The proportion of tyre debris varied greatly – depending on the traffic on the adjacent road.

"Our results also indicate that the abrasion of road markings is another important source contributing to the microplastic load along roads," explains Scholz-Böttcher. The researchers also found evidence that the small plastic particles accumulate surprisingly quickly in the spider webs. According to Scholz-Böttcher, the method represents a simple alternative to complex measurements for comparing the microplastic content present in the immediate ambient air. This can be particularly important in the context of further toxicological investigations.