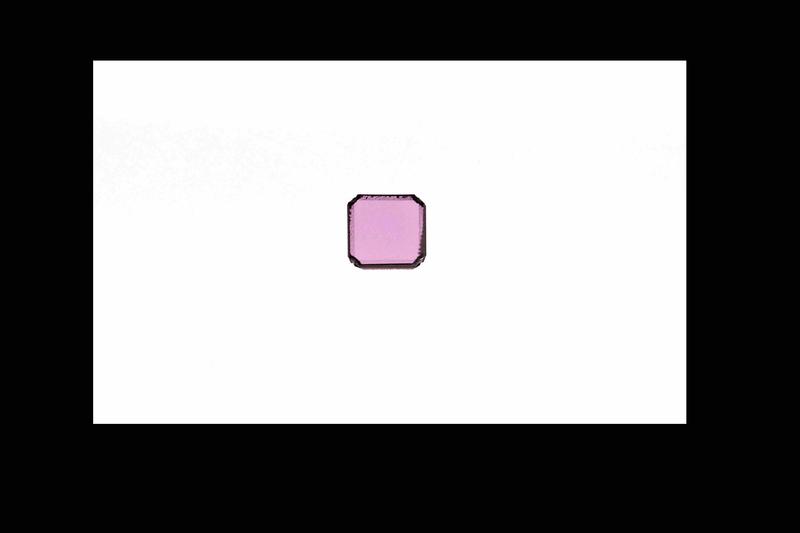 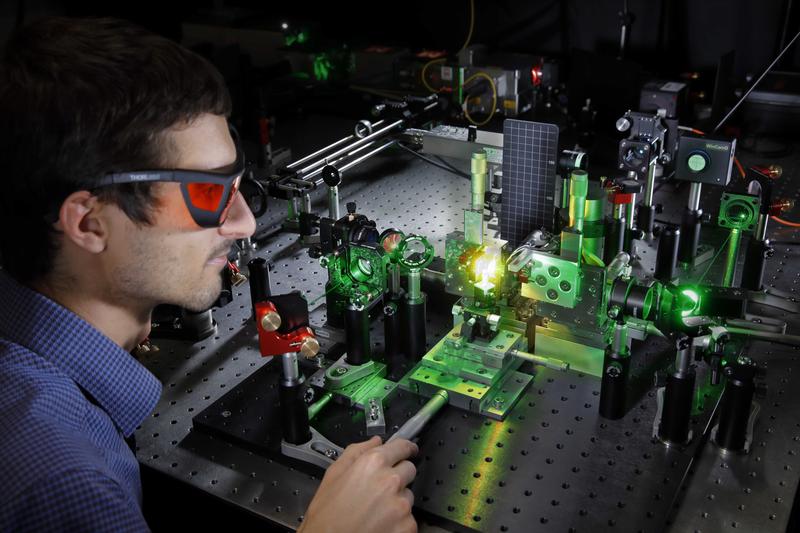 In medical care, magnetic fields of heart and brain activity are measured to detect diseases at an early stage. To measure even the smallest magnetic fields, researchers at Fraunhofer IAF are working on a new approach: diamond-based laser threshold magnetometry. The idea is to use diamond with a high density of nitrogen-vacancy centers in a laser system. Now the researchers have succeeded in reaching a milestone: They were able to demonstrate the world's first measurement of magnetic-field-dependent stimulated emission and even set a new contrast record. The results were published in the journal Science Advances.

In medical diagnostics, sensitive sensors are needed to measure, for example, the weak magnetic fields of heart and brain activity (MCG, MEG) of the human body and create images of the body via magnetic resonance imaging (MRI), which enables the detection of diseases at an early stage. However, only a few highly sensitive magnetic field sensors achieve the necessary precision and each of them presents major technical obstacles for clinical application. The already established SQUID sensors require complex cryogenic cooling of about -270 °C. Vapour cell magnetometers (OPMs) are another option. Although these achieve the highest sensitivities even without cryogenic cooling, they have the disadvantage that they require absolute shielding of all background fields, including the earth's magnetic field, and thus place massive structural requirements on rooms and buildings. Due to this, the more inaccurate electric measurements (ECG, EEG) continue to be common in everyday clinical practice.

At the Fraunhofer Institute for Applied Solid State Physics IAF in Freiburg, a project team is already researching a more suitable alternative: "Our goal is to develop an extremely sensitive magnetic field sensor that works at room temperature as well as in the presence of background fields and is thus useful for clinical implementations," explains Dr. Jan Jeske, project manager at Fraunhofer IAF.

Measuring the smallest magnetic fields with diamond and laser

In the project "NV-doped CVD diamond for ultra-sensitive laser threshold magnetometry" (short “DiLaMag”), which is funded by the German Federal Ministry of Education and Research, Jeske and his team are researching a worldwide unique approach for highly sensitive quantum magnetic field sensors. For the first time, they use diamond in a laser system, thus enabling considerably more precise magnetic field measurements.

For the project, diamond is doped with a high density of nitrogen-vacancy centers (NV centers). "Due to its material properties, diamond with a high density of NV centers can vastly improve measurement precision when used as a laser medium," Jeske explains. NV centers in diamond are atomic systems consisting of a nitrogen atom and a carbon defect. They absorb green light and emit red light. Since the fluorescence of these atomically small NV centers depends on the strength of an external magnetic field, they can be used to measure magnetic fields with high local resolution and good sensitivity.

After several years of research effort, Jeske's team has reached an important milestone: It has demonstrated the world's first measurement of magnetic-field-dependent stimulated emission. In the process, the researchers made an interesting discovery: "We observed a very relevant and previously unknown physical process in NV diamond: the absorption of red light induced by green laser irradiation," Jeske reports.

Using NV diamond as a laser medium, they not only achieved a 64 percent amplification of the signal power by stimulated emission. The project team was even able to set a worldwide record: The magnetic-field-dependent emission shows a contrast of 33 percent and a maximum output power in the mW regime. This is a new contrast record in magnetometry with NV ensembles.
Stimulated emission is responsible for this. "We were able to show that this record would not have been possible with spontaneous emission. Thus, we have experimentally demonstrated the theoretical principle of laser threshold magnetometry for the first time," Jeske emphasizes.

These results also show the advantages of diamond-based laser threshold magnetometry over conventional methods and prove that it is possible to measure the smallest magnetic fields.

The concept of laser threshold magnetometry only works if diamond has a very high density of NV centers while retaining good optical properties. For this reason, the project team has done extensive material work to optimize diamond accordingly. This work includes, on the one hand, the production of diamond by CVD (chemical vapor deposition) and, on the other hand, post-processing by electron irradiation and temperature treatment for an increase in NV density.

During diamond growth by CVD, which enables very precise and controlled integration of NV centers, the researchers were already able to achieve a high nitrogen doping. Using electron irradiation, they then determined an optimal fluence for nitrogen density, resulting in a 20 to 70-fold increase in NV density. Absorption spectra enabled them to follow the formation of the NV centers live. During the characterization, they established the correlations between three crucial factors for optimal NV ensembles and optimized them: a high NV density, a high conversion of substituted nitrogen using high fluence irradiation, and a high charge stability. As a result of these detailed studies, the team at Fraunhofer IAF has succeeded for the first time in producing CVD diamond with a high density of NV centers and in good quality, thus creating the prerequisite for the development of diamond-based laser threshold magnetometry for the measurement of extremely small magnetic fields.

RMIT University (Australia), the National Institutes for Quantum and Radiological Science and Technology (Japan), and the College of Staten Island (USA) contributed to the to the scientific publication.

The German Ministry for Education and research (BMBF) supports the five-year project as part of their call »NanoMatFutur« – a program to promote early-career and highly qualified scientists in the field of materials development (FKZ: 13XP5063).