What doesn't kill you makes you stronger 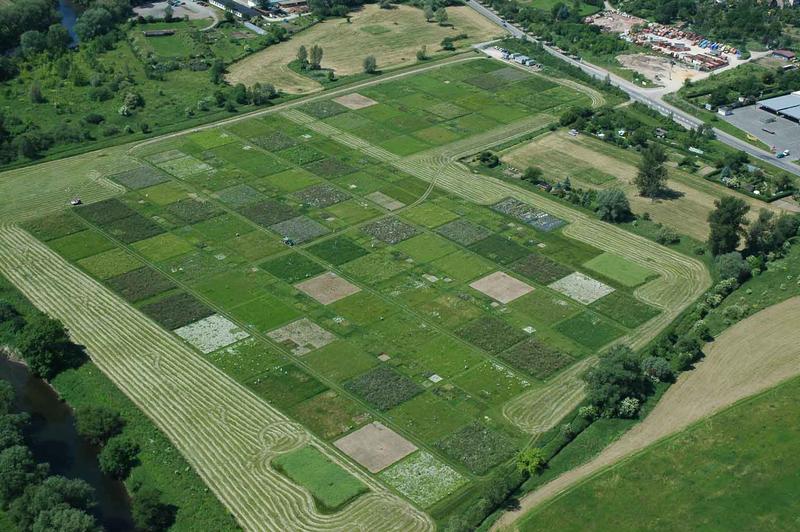 The exposure to drought during previous generations in the field increases complementarity between offspring of different grassland species and thus makes them more resilient to subsequent drought. A research team led by the University of Zurich and with the participation of the German Centre for integrative Biodiversity research and Leipzig University has revealed this effect with about 1000 experimental plant communities in pots. The results, published in Nature Communications, suggest that if past extreme climatic events do not completely exclude species, they may enhance the sustainability of biodiversity and ecosystem functioning in a future with more frequent extreme events.

The research team exposed experimental grassland communities to eight recurrent yearly droughts vs. ambient conditions in the context of the Jena Experiment, a large grassland biodiversity experiment in Jena, Germany. The seed offspring of 12 species were then grown individually, in monocultures, or in two-species mixtures and subjected to a subsequent drought event in a glasshouse at the University of Zurich, Switzerland.

Offspring from plants with drought-exposure history recovered faster from the subsequent drought than those from plants without such a history; however, this was only evident when plants were grown in mixtures but not in monocultures. “These findings suggest that, in diverse plant communities, species over time can evolve better cooperation, thus increasing the stability of an ecosystem to disturbance from outside. This has important implications for biodiversity conservation under global climate-change scenarios”, says Prof Bernhard Schmid of the University of Zurich, senior author of the current publication in Nature Communications. “Conserving biodiversity can improve the adaptation of plant communities to extreme events. This adaptation is only possible if species co-experienced the past events and also face the future events together, not alone.”

The team further explored the reasons why drought-exposure history improved the recovery of mixtures from the subsequent drought. They found that offspring from plants with drought-exposure history showed a higher complementarity between species during the recovery phase than those from plants without such a history. “Species complementarity means that species limit themselves more than they limit others. It is a crucial mechanism for maintaining biodiversity and buffering the impacts of climate change on ecosystem functioning”, explains Dr Yuxin Chen, a former Postdoc at the University of Zurich, now an associate professor at Xiamen University in China and the first author of the current publication. “This transgenerational reinforcement of species complementarity may help mixture communities to sustain their biodiversity and ecosystem functioning in a future with more frequent extreme climatic events.”

Co-author Prof Nico Eisenhauer from iDiv and Leipzig University and speaker of the Jena Experiment says, “These novel results highlight that plants learn to collaborate over time, particularly under climatic extremes. This indicates that old and diverse grasslands are of utmost importance for stable ecosystem functioning in a changing world.”