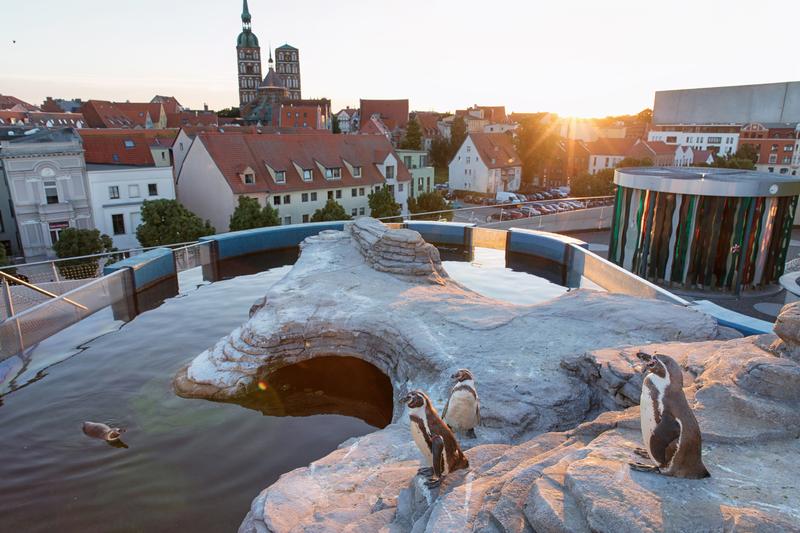 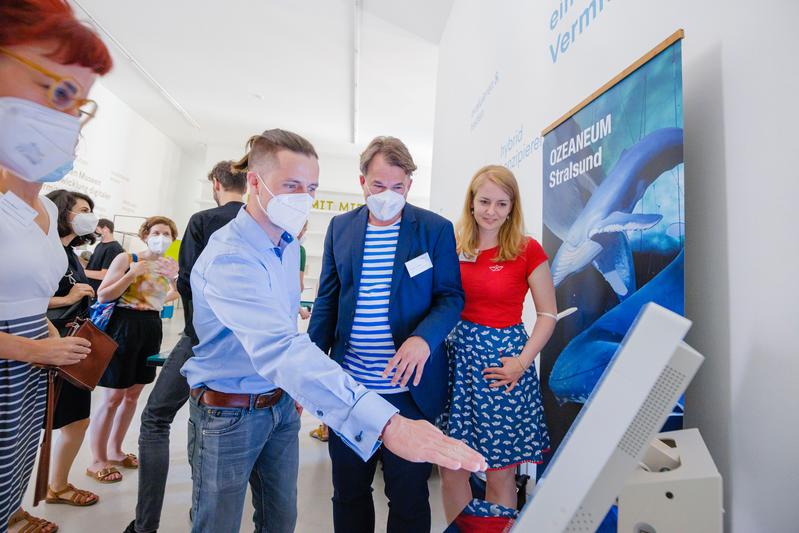 The many innovations resulting from the applied research of the Fraunhofer Gesellschaft have so far mainly benefited industrial companies. In the future, Fraunhofer IPMS intends to make its research increasingly available to cultural institutions and thus to the public community. Accordingly, a pilot project was launched with the German Oceanographic Museum. In the future, visitors to the OZEANEUM Stralsund will be able to feed virtual penguins contactless thanks to a Fraunhofer IPMS development.

How do semiconductor research and Culture and Arts fit together? And what intersections do public cultural institutions have with innovation drivers in applied research? These are questions that the Fraunhofer Institute for Photonic Microsystems IPMS has addressed. "Normally, large industrial customers are the clients of research institutes. However, it should be an important goal to network with cultural institutions as well," explains Marco Kircher, a scientist at Fraunhofer IPMS. This is because the research work, which in some cases takes years, and its resulting developments are often not visible or accessible to the public. In addition, large corporations and growth markets significantly determine the research landscape and are major drivers of innovation. "In this context, individual interests and needs from non-industrial sectors unfortunately receive little influence in shaping research," Marco Kircher continues. However, museums can also be drivers of innovation with their publicity effect and thus make the latest technologies and findings available to the general public. "Ultimately, the technologies we develop for the automotive industry or medical technology can be used just as effectively in the museum sector," Marco Kircher continues. The "museum4punkt0" project provides an opportunity for technology transfer from research to culture.

Collaboration between Fraunhofer and the German Oceanographic Museum

Since the beginning of 2022, the Fraunhofer IPMS in Dresden and the German Oceanographic Museum with its OZEANEUM site in Stralsund have been working together. Within the joint project "museum4punkt0 - Digital Strategies for the Museum of the Future", the OZEANEUM wants to create interaction possibilities with its visitors in order to reinvent itself both digitally and culturally.
"The pandemic in particular has brought contactless interaction with our exhibition into focus. The sudden restrictions and necessary permanent disinfection of all interacting controls in the museum - whether touch screens, levers or buttons - made us realize how many surfaces are touched in the first place," says Anke Neumeister, project coordinator at the German Oceanographic Museum. In her search for contactless interaction possibilities, she became aware of the work of the Fraunhofer IPMS. Their researchers are developing microscopic structures to generate ultrasound, which are already being used in a wide variety of commercial gesture control systems. "Contactless control systems have great potential for supporting digital development in museums," explains Anke Neumeister. However, they will only become suitable for broader use in museums with control technologies that function reliably even under difficult lighting conditions or in confined spaces, while enabling intuitive as well as hygienic operation. The two partners, together with the Fraunhofer Institute for Machine Tools and Forming Technology IWU and the Futurium, had already discussed this topic intensively at the digital event "Contactless Touch" and provided an insight into gesture control.

Within the subproject "(Digital) Meer erleben" (Experience the sea digitally), Fraunhofer IPMS developed a demonstrator that allows museum visitors to control a penguin with hand movement. In doing so, visitors move the penguin through the water in search of sprats for its chick. "The ultrasound-based technology developed at the institute implements familiar gestures as control commands without contact to a surface," explains project manager Marco Kircher.
On June 24, 2022, the official showcase of the "museum4punkt0" project took place at Haus Bastian of the Center for Cultural Education in Berlin. On that occasion, the demonstrator was also handed over to the German Oceanographic Museum. "We are looking forward to the interdisciplinary exchange with the other participants. With this collaboration, we present the feasibility of using novel applied research results in cultural institutions and allow the public a look behind the scenes of the research landscape," says Marco Kircher. "With the handover of the demonstrator, current research results have been made available to visitors and this creates a shoulder-to-shoulder connection between research, culture and science," he continues.

Soon, visitors to the OZEANEUM Stralsund will be able to help the virtual penguin feed its chick. Within the cooperation project, it will now be determined whether and how museum guests accept this form of interaction. The test will be accompanied by surveys. The results will be included in the publication of the results of "museum4punkt0" as well as in further technology development at Fraunhofer IPMS. This will provide important information for further developments with a focus on museums as possible addressees of a marketable product.

---
About Fraunhofer IPMS
The Fraunhofer Institute for Photonic Microsystems IPMS stands for applied research and development in the fields of intelligent industrial solutions, medical technology and improved quality of life. Our research focuses on miniaturized sensors and actuators, integrated circuits, wireless and wired data communication, and customized MEMS systems.