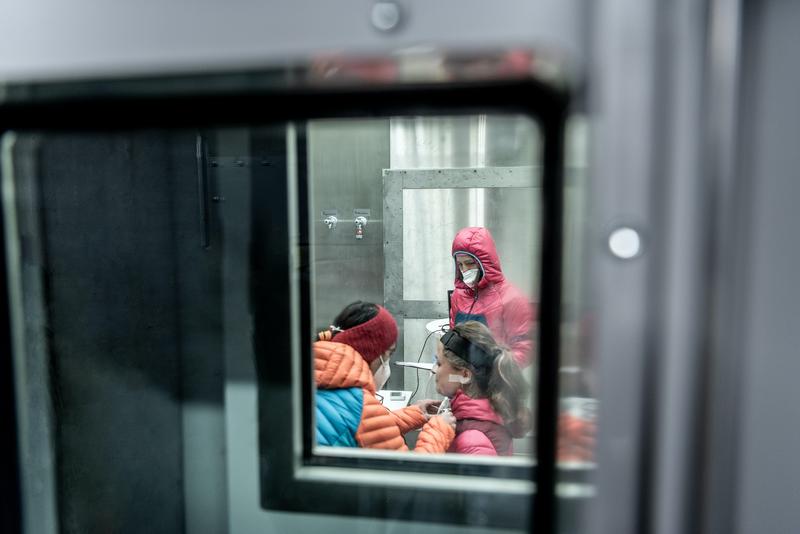 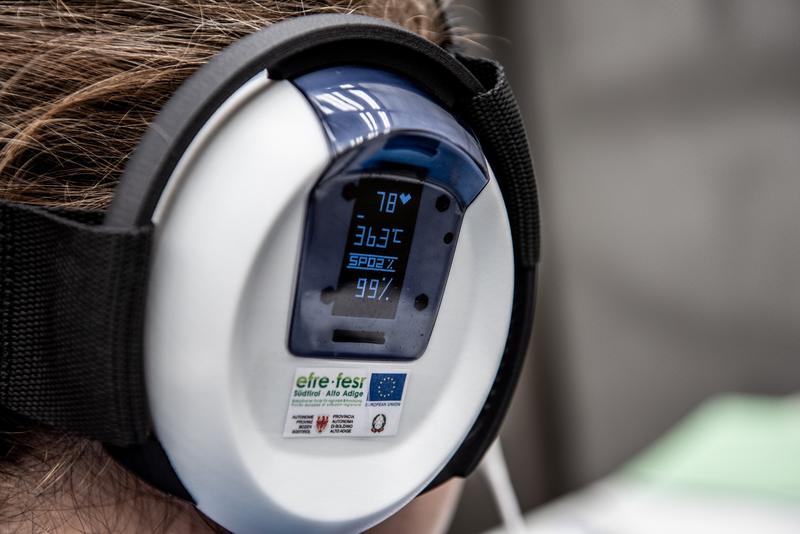 During an emergency medical intervention, measuring vital parameters is not always possible. Victims are often uncooperative, spaces uncomfortable and the equipment one can carry very limited, just think of a helicopter rescue or the scene of a car accident.
Eurac Research in collaboration with the companies Minnova Med and Kerr Srl has patented a space-saving, noninvasive and easy-to-use instrument that measures core temperature as well as oxygen saturation and heart rate. It looks like a headset for listening to music, uses sensors placed in the external ear canal and has been tested in the terraXcube extreme environment simulator, in temperatures ranging from -10 to 20 degrees.

In emergency situations, such as when the victim is suspected to be hypothermic, knowing their core temperature as accurately as possible is essential for proper triage, but this information is not always easy to obtain – current thermometers are not accurate enough, especially in harsh environmental conditions, and the probes used in hospitals, for example the esophageal one, most often cannot be inserted in the field. When the Eurac Research team, on the initiative of Hermann Brugger and Giacomo Strapazzon, supported by the technical expertise of the South Tyrolean companies Minnova Med, represented by Michaela Egebrecht, and Kerr Srl, represented by Andrea Stona, conceived MedSENS –the instrument that measures various vital parameters from the ear canal– they had precisely this scenario in mind. “Also, thanks to the experience of some of us in mountain rescue and emergency service, we knew we wanted a noninvasive and easy-to-use instrument that combined temperature measurement with oxygen saturation measurement,” recalls Michela Masè, a physicist and researcher at Eurac Research. “There are already devices on the market that can be inserted into the ear, but they are too sensitive to external temperature and therefore not reliable so that’s where we started from.”
MedSENS consists of a probe about the size of an ear-plug, which contains innovative measuring sensors; the rescuer pushes it into the victim’s ear, then covers it with an outer ear pad that insulates against heat and cold and incorporates a small screen that shows the measured values in real time. In fact, in addition to body temperature, MedSENS also measures heart rate and oxygen saturation and gives a complete picture of essential vital parameters. The data can then be sent wirelessly to any other device connected by rescue teams.

The instrument was tested for more than a year and underwent countless adjustments.
Two rounds of experiments took place in the terraXcube extreme environment simulator. They involved a total of 40 people, including students undertaking their International Master’s Degrees in Mountain Emergency Medicine. During simulations of interventions between -10 and 20 °C, rescue workers had to apply the device; the ‘victims’ were monitored both through MedSENS and a traditional esophageal probe which had previously been inserted in the ambulatory. “Our tests had a double purpose,” explains Alessandro Micarelli, an otolaryngologist and researcher at Eurac Research. “On the one hand, to test whether the use of the instrument was easy even, for example, with hands affected by the biting cold; on the other, to verify that MedSENS measurements were in agreement with those of the in-depth probes previously inserted.”
Having passed all the tests, the prototype has now been patented and the group is looking for partners who are interested in its large-scale production and commercialization.
“I hope that this will happen as soon as possible: MedSENS, which was created with rescue in extreme contexts in mind, could in fact become a very useful tool in hospital practice as well, I’m thinking especially for use in operating rooms,” commented Giacomo Strapazzon, head of the Institute for Mountain Emergency Medicine at Eurac Research. “And we are all the more proud of this patent because it is the result of a fruitful collaboration between our research center, companies and the NOI Techpark.”