High harmonics illuminate the movement of atoms and electrons 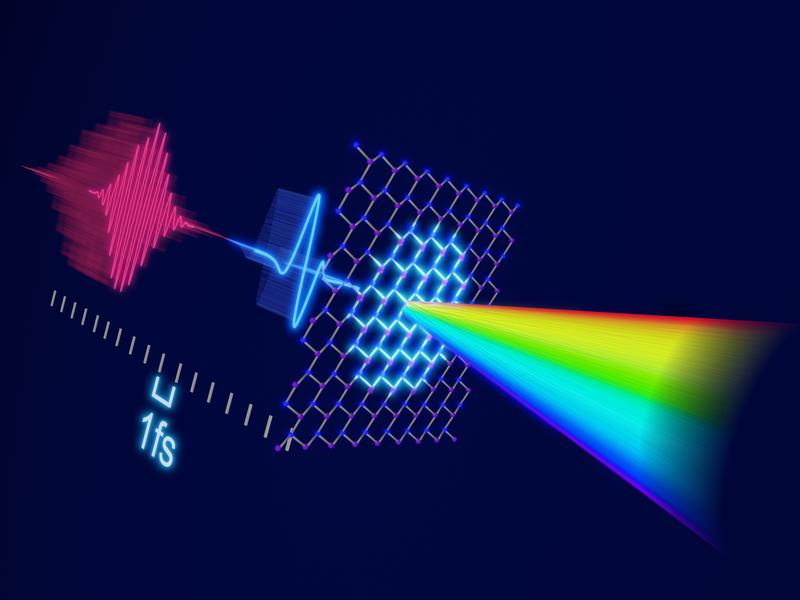 Laser light can radically change the properties of solid materials, making them superconducting or magnetic within millionths of a billionth of a second. The intense light causes fundamental, immediate changes in a solid by ‘shaking’ its atomic lattice structure and moving electrons about. But what exactly is happening at that elementary level? How do those atoms and electrons actually move?

Now a theory team at the Max Planck Institute for the Structure and Dynamics of Matter in Hamburg has found a new way to illuminate those atomic motions. Writing in PNAS, the researchers outline how a laser pulse generates light emission at higher frequencies from the material, so-called higher harmonics. This high energy light, however, does not stay the same but it changes with each movement of the lattice. As the high harmonics change in intensity, they provide ‘snapshots’ of the atoms’ and electrons’ movements at each exact moment.

The team studied a monolayer of hexagonal boron nitride (hBN) just one atom thick, whose lattice can be excited to vibrate on timescales of tens of femtoseconds. A first ‘pump’ laser pulse hits the material, making the atoms move in unison. Subsequently, a second infrared laser pulse excites the electrons yet further, so that they cause the emission of light at new frequencies - the high harmonics. These contain the underlying information about the lattice vibrations (also known as phonons). By analysing them, scientists gain detailed new insights into those atomic motions.

The team’s findings represent a major step forward in understanding the fundamental changes in a solid material while it is being irradiated by an intense laser. It is also a highly efficient method because until now researchers needed far more advanced light sources to observe those elementary motions.

In addition, the team showed that, once the atoms begin to vibrate, the interaction between the material and the initial laser pulse changes with the phase of the laser itself. This means that scientists can pinpoint exactly which movement in the lattice was sparked by which phase in the laser’s optical cycle, as if they were setting a stopwatch to that particular moment in time. Put differently: The team’s work has produced a highly advanced spectroscopic technique with extreme temporal resolution. Within this approach, lattice movements can be charted down to a single femtosecond – but without the need for high-energy X-rays or attosecond pulses, which are far more difficult to employ.

“The main impact of this work is that we are forming a starting point to understand how phonons play a role in nonlinear light matter interactions,” says lead author Ofer Neufeld from the MPSD Theory Department. “This approach lets us probe femtosecond structural dynamics in solids, including phase transitions, dressed phases of matter, and also coupling between electrons and phonons.”