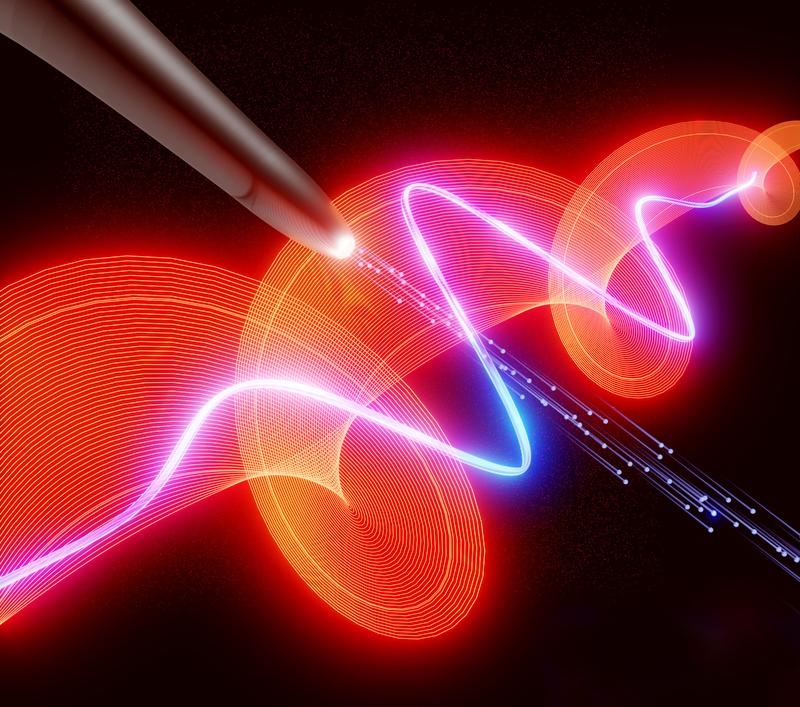 With their newly developed "nanoTIPTOE" technique, physicists from the Max Planck Institute of Quantum Optics and the Ludwig Maximilian University of Munich, in cooperation with Stanford University, have managed for the first time to record a helical light field on shortest time and length scales.

It has been known since the end of the 19th century that light is an electromagnetic wave, whereby its frequency determines its color. With around one quadrillion oscillations per second, light oscillates so quickly that it was not until the beginning of the 21st century that methods were developed to measure the temporal evolution of its field directly. Since then, more and more secrets of light have been revealed. Now, physicists from the Ultrafast Electronics and Nanophotonics group led by Dr. Boris Bergues and Prof. Matthias Kling from the attoworld team at the Ludwig-Maximilians-Universität (LMU) and the Max Planck Institute for Quantum Optics (MPQ) have developed a new technique, the so-called “nanoTIPTOE” technique, which allows measuring the electrical field of ultrashort laser pulses in time and space. This makes it possible to take "photographs" of light waves with a spatial and temporal resolution that has not been achieved before.

Light oscillations are incredibly fast. The frequency range of our current electronic technology does not even come close to that of light. For comparison: A modern computer works in the single-digit gigahertz range – around a million times slower than light oscillates. If we could operate our computers with light, they would be many times faster. A first step in this direction is to learn how to exactly steer and control light. Because the measurement has to take place inside a laser focus, within a volume much smaller than the focus size, this requires high precision temporal measurements in combination with high spatial resolution.

This poses new challenges for physics because when we focus light onto a point (much like sunlight with a magnifying glass) the resolution is of the order of the focus size. Because light is diffracted, the theoretically achievable resolution is limited to about the size of the wavelength, that is, to a few hundred nanometers. In typical applications, however, this limit is difficult to achieve and the focus size is often in the range of a few micrometers. Therefore, effects on scales that are smaller than the focus size cannot be examined with focused light alone.

Physicists from the ultrafast electronics and nanophotonics group led by Dr. Boris Bergues and Prof. Matthias Kling of the attoworld team have now elegantly circumvented this problem. For their measurements, they used a tiny metallic nanotip that was much smaller than the focus of the light. This has the advantage that the field enhancement at the end of the tip, which is similar in principle to a lightning rod, allows to confine the measurement to the tiny end of the tip. The conductivity of the tip material in turn, enables the use of state-of-the-art electronic measurement methods, making the technique easy to handle and at the same time precise. The tip itself is only a few nanometers in size and serves to probe the field in one point in space. To obtain an overall image of the light field, the tip is scanned across the focus. Each tip position thus corresponds to one pixel of the image. In addition, the physicists can simultaneously measure the temporal evolution of the field in each pixel.

When light hits the needle tip, a short current pulse is generated. The latter flows through the tip in a few hundred attoseconds (an attosecond is one billionth of a billionth of a second). The laser field to be characterized modulates the induced current that is subsequently measured. With these current changes within the extremely short time interval, the physicists achieve the temporal resolution necessary to observe the light field.

With their technique, which they called "nanoTIPTOE", the physicists have introduced a new approach to lightwave measurement. As a first application, scientists Johannes Blöchl and Dr. Johannes Schötz from the Ultrafast Electronics and Nanophotonics group, together with international collaborators, measured the field of an optical vortex beam, a specially structured type of laser field, which resembles a spiral of light. The light frequency of the beam is many orders of magnitude higher than what conventional electronics can detect.

The achieved spatial resolution made it possible to reconstruct the spatial and temporal field distribution of the optical vortex in the focus of the laser beam and to observe the field amplitudes of the femtosecond vortex pulses rotating around the propagation axis (a femtosecond is one millionth of a billionth of a second).

"With our new methodology based on current measurements, we can achieve a new quality in spatially resolved spectroscopy and thus also drive applications in field-resolved scanning microscopy," explains Johannes Blöchl.