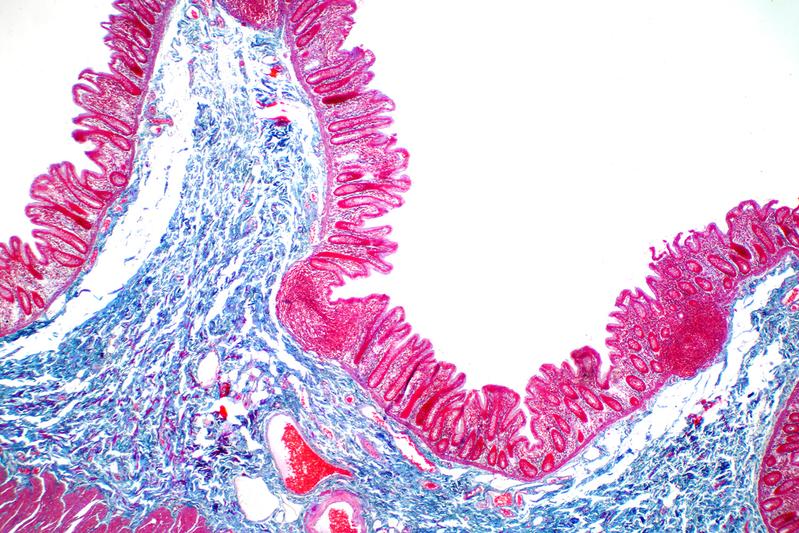 Stem cells are a hot topic for creating medical treatments. However, scientists still do not fully understand how they choose to divide or differentiate to renew organs. Researchers have now found a new biophysical mechanism that regulates stem cells in the intestines of mice. There, a stem cell is not purely defined by intrinsic molecular markers but also by their location and movements in their environment. This could have implications for possible new treatments.

Your gut is a wondrous place. A special layer of cells that coats the insides of your small and large intestines takes in nutrients and water from what you ate while keeping anything bad out of your system. This layer is called the intestinal epithelium. It completely renews itself every four to seven days using stem cells. These are a special cell type that can both self-renew by dividing and differentiated to give rise to any other types of cells to renew your organs. Scientists still do not know how exactly they make these decisions however, or what defines a stem cell.

Bernat Corominas-Murtra, previously postdoc at the Institute of Science and Technology Austria (ISTA) and now assistant professor at the University of Graz, and Edouard Hannezo, professor at ISTA, worked together with an international group of experimental researchers led by the Jacco Van Rheenen team in Amsterdam to study the stem cells in the intestinal epithelium. They found an exciting new mechanism that could change our understanding of what a stem cell is. Their findings have now been published in the journal Nature.

The intestinal epithelium is just one layer of cells thick and constantly renewed. It is all over the villi which look like tiny tentacles covering the insides of the small and large intestines. Between the villi, there are tiny pockets in the tissue called intestinal crypts. That name may invoke some mystery and that may be not too far off what really happens there. “At the bottom of the crypts, stem cells in the epithelium are constantly dividing. Some of the resulting cells remain as stem cells in the crypt and the others are pushed outwards towards to tip of the surrounding villi,” Corominas-Murtra explains, “there, in the end, they differentiate into functional cell types that allow intestinal function and which are discarded after a few days. This happens all the time inside your body and if this mechanism breaks down, you can get into serious medical trouble.”

While studying these stem cells in the small and large intestines, the scientists were initially perplexed. “How we usually think of stem cells is that being a stem cell is determined by intrinsic biochemical properties of a cell – something like a biochemical marker we can identify,” Corominas-Murtra continues. “We found that among the cells that had this traditional stem cell marker, many of them never actually worked as stem cells but were pushed out of the crypts to be discarded instead, without contributing at all to the long-term renewal of the gut. We also saw that while classical markers predicted about the same number of stem cells in both the small and large intestines, there were about twice as many of them actually working as stem cells in the small intestine than in the large intestine.” The scientists therefore wanted to understand what determines which cells actually act as stem cells and they found a surprising new mechanism that regulates the stem cells in the crypts.
“We found that whether these cells behave as a stem cell or not is all about their location! Cells in the epithelium are not just pushed outwards from the crypt by the cell divisions below them – like on a conveyor belt – but there is another kind of motion involved,”

Corominas-Murtra explains. The scientists found that cells in the epithelium layer also actively move around in random directions – back and forth along the conveyor belt if you will. This way, cells that were already pushed along the conveyor belt for a bit can end up back at the base of the crypt, and act there again as stem cells to divide and replenish the epithelium. Edouard Hannezo explains the possible implications of these findings, “These movements constitute a new environmental mechanism that determines which cells get to functionally act as stem cells. In the small intestine, the molecular signal regulating the movements is stronger than in the large intestine, so cells can move more frequently back into the crypt. This explains why there are more actually working stem cells in the small intestine than in the large ones. This could have major implications for our understanding of what a stem cell actually is and how to use them in medical applications.”

This insight builds on previous research by Bernat Corominas-Murtra and Edouard Hannezo at ISTA and the work of the Van Rheenen group. Originally coming from a physics background, Corominas-Murtra and Hannezo created an advanced mathematical model of the intestinal epithelium layer which included the motion of the cells both away from and back towards the crypt. Using their model, they could predict the number of actually working stem cells in the small and large intestines. A number of other research groups from all around Europe designed experiments using the latest methods in microscopy and genetics to test the predictions and found them to be accurate. They even tried to inhibit the chemical signal in the crypts and saw that this reduced the number of working stem cells as predicted.

Funding information
Regarding the contributions related to ISTA, Bernat Corominas-Murtra acknowledges the support of the field of excellence “Complexity of life in basic research and innovation” of the University of Graz and Edouard Hannezo acknowledges funding from the European Research Council (ERC) under the European Union’s Horizon 2020 research and innovation program (grant agreement No. 851288). For more details, see the funding section in the paper.

Animal welfare
In order to better understand fundamental processes, for example, in the fields of neuroscience, immunology, or genetics, the use of animals in research is indispensable. No other methods, such as in silico models, can serve as alternative. The animals are raised, kept, and treated according to the strict regulations of Austrian law. All animal procedures are approved by the Federal Ministry of Education, Science and Research.

ISTA
The Institute of Science and Technology Austria (ISTA) is a PhD-granting research institution located in Klosterneuburg, 18 km from the center of Vienna, Austria. ISTA employs professors on a tenure-track system, postdoctoral fellows, and doctoral students. While dedicated to the principle of curiosity-driven research, the Institute owns the rights to all scientific discoveries and is committed to promoting their use. The first president of ISTA is Thomas A. Henzinger, a leading computer scientist and former professor at the University of California in Berkeley, USA, and the EPFL in Lausanne, Switzerland. He will be followed by Martin Hetzer in 2023. The graduate school of ISTA offers fully funded PhD positions to highly qualified candidates with a Bachelor's or Master's degree in biology, mathematics, computer science, physics, chemistry, and related areas. www.ista.ac.at