Stop of Russian gas supplies: Simulation of the European pipeline grid highlights deficits in the infrastructure 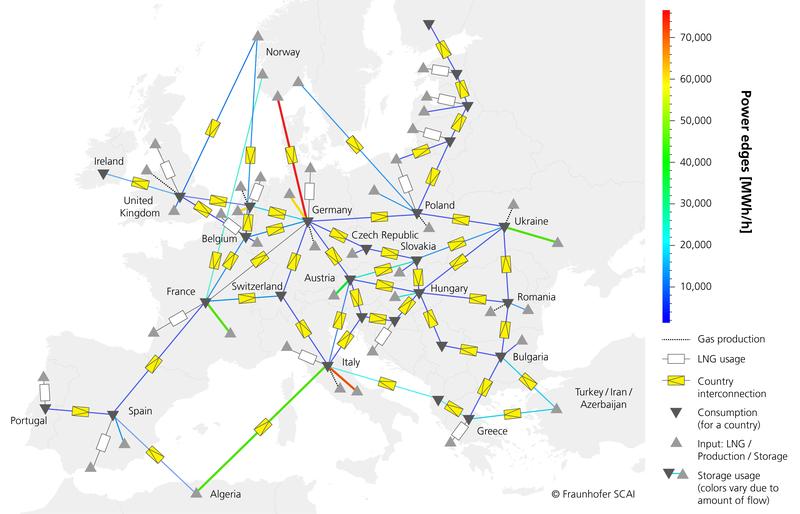 What happens if Russia completely stops gas supplies to Europe? Fraunhofer IEG, Fraunhofer SCAI, and TU Berlin have analyzed the situation by accurately modeling the entire European gas network. The result: Since it is impossible to rebuild the technical infrastructure so quickly, Germany will have a shortfall of 30 percent of the natural gas volume in the coming winter compared to the previous year. Targeted technical measures could reduce the deficit to 20 percent, provided Europe acts in a coordinated manner.

SANKT AUGUSTIN. If Russia completely stops its gas supplies in the coming months, it would not be possible to make up the shortfall in the short term – even if there were sufficient availability of liquefied natural gas (LNG) on the market. In the coming winter, Germany will face a shortage of 30 percent (Europe, 25 percent) of the volume of natural gas available in the previous year. The reason: It is impossible to convert the technical infrastructure of the natural gas network so quickly. By 2025, however, the supply gap could be closed by an infrastructure expansion and an expected decline in gas demand. This is the conclusion arising from a study on behalf of ESYS, a joint initiative of the German science academies acatech, Leopoldina and Akademieunion, performed by Fraunhofer IEG, Fraunhofer SCAI, and TU Berlin.

For the first time, an investigation is available that examines the effects of a supply stop by modeling the actual physical characteristics and properties of the gas network – other studies have worked only with highly simplified “balance sheet” models. The new approach allows recommendations to be made regarding concrete measures to optimize the infrastructure. The focus is on which technical changes to the gas network are necessary to supply all countries in the European Union and Ukraine with gas.

The study examines the situation when gas no longer flows from northeastern Europe to western and southern Europe but in the opposite direction from western and southern Europe (where most LNG terminals are located) to eastern Europe. Even with this flow direction reversal, it would be impossible to supply all countries with similar volumes as before. From the large density of high-volume pipelines in eastern Europe, the network branches out like the circulatory system in the human body. Flow reversal in such a network is a complex problem because there are only a limited number of entry points with technically limited capacity. In addition, there are no German LNG terminals to receive and inject the LNG delivered by ship. Norway, Algeria, and Turkey can only increase their gas supplies by a few percentage points – indispensable but not suited to be a game changer. Thus, the report concludes that short-term efforts to reduce natural gas demand are essential.

To simulate the European gas network, the researchers used the MYNTS (Multiphysical Network Simulator) simulation software developed by Fraunhofer SCAI. The software, which is in use by numerous network providers, is designed to analyze and optimize the operation and planning of complex networks for gas, electricity, and water. MYNTS models and simulates the networks as a system of differential-algebraic equations. The simulation results immediately indicate the effects of changes in various factors, such as limited flow rates.