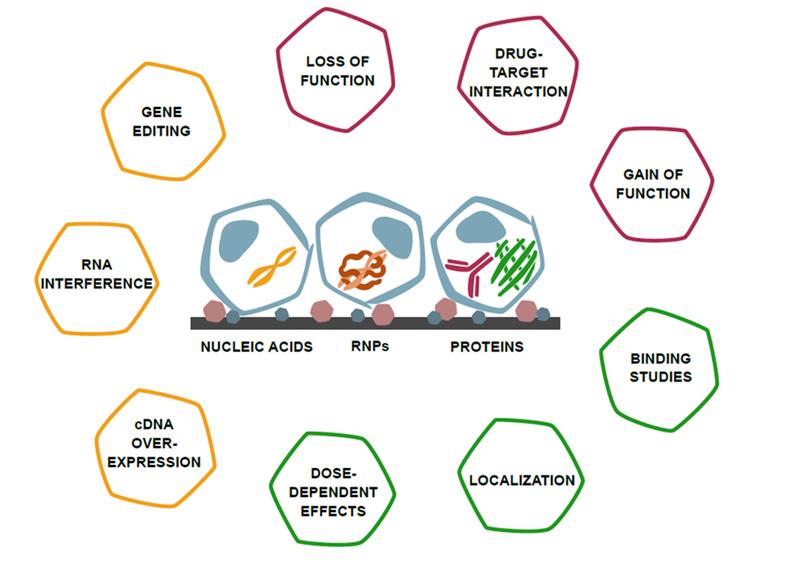 "Top-fase" is a simple and universal tool for the targeted transfection of numerous molecule species into cells and cell lines. This new method, developed at the BioQuant Centre of Heidelberg University, enables an accelerated and cost-efficient search for new biopharmaceuticals, the identification of intracellular drug targets, the optimisation of already existing drugs and the establishment of novel cellular assays.

For basic research, diagnostics and therapy, there is a need for a simple method to introduce macromolecules, such as antibodies, into living eukaryotic cells. The new method enables an accelerated and cost-efficient search for new biopharmaceuticals, the identification of intracellular drug targets, the optimisation of already existing drugs and the establishment of novel cellular assays.

The decisive factors for the success or failure of a transfection are above all the cell type used and the properties of the cargo molecule to be introduced. Established transfection technologies exist for immortalised cell lines (e.g. HeLa or CHO) as well as some primary cells, but always in combination with nucleic acids in order to specifically intervene in the gene expression of the cell. For all other classes of molecules, however, there are currently only a few solutions, just as for other cell types (stem cells, immune cells, neuronal cells as well as fully differentiated cells).

A novel technology for the reverse transfection of proteins and other macromolecules into eukaryotic cells has been developed at the BioQuant Research Institute at Heidelberg University. The new method, called TOP-fase (transfection of proteins from the solid phase), allows the gentle introduction of very different classes of macromolecules, functionally active proteins (e.g. antibodies), peptides, metabolites or membrane-impermeable active substances. In addition, the method according to the invention can also be used to introduce more exotic cargoes, such as exogenous organelles, molecular probes or nanoparticles into the cell.

TOP-fase here stands for reverse solid-phase transfection technology, in which multi-well plates are coated with a special complexation of cargo and transfection reagents. In this process, the molecules to be introduced into living cells are complexed with carrier molecules and mixed with additives and coating molecules. The solution is then applied to the surface of the substrate carrier and allowed to dry. In the "reverse" step, the living cells are only added to this solid substrate at the end. The molecules to be transported are taken up by means of endocytosis and thus in a much gentler way than with conventional methods for introducing molecules into cells. The functional principle of TOP-fase has been repeatedly experimentally validated and is applicable to all common cells and cell lines.

The method developed by the research groups of Dr. Holger Erfle and Dr. Vytaute Starkuviene offers the advantage that it can be applied to numerous molecules to be transported and can be used for common cells and cell lines. The TOP-fase method is particularly gentle on cells due to the natural uptake process. The method is also characterised by simple sample preparation and conversion and is also highly throughput-capable, i.e. it can be easily automated and stored for a long time.

TOP-fase has a very wide range of applications. From "target identification" to "lead optimisation" in target-based drug discovery, from the first screen to target deconvolution in phenotypic drug discovery - the variety of possible applications at all stages of the drug discovery process is enormous. Possible areas of application are, for example, point-of-care diagnostics, protein knock-downs or knock-ins as well as the determination of the localisation of intracellular proteins.

A patent application has been filed for the invention. Technologie-Lizenz-Büro (TLB) GmbH supports Heidelberg University in patenting and marketing the innovation. TLB is in charge of exploiting the technology and offers companies the opportunity to take out licences.
For further information: Innovation Manager Dr. Dirk Windisch (windisch@tlb.de)