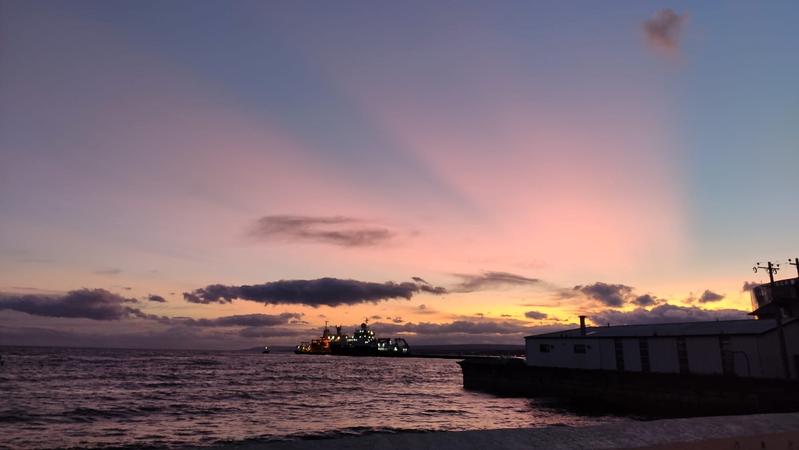 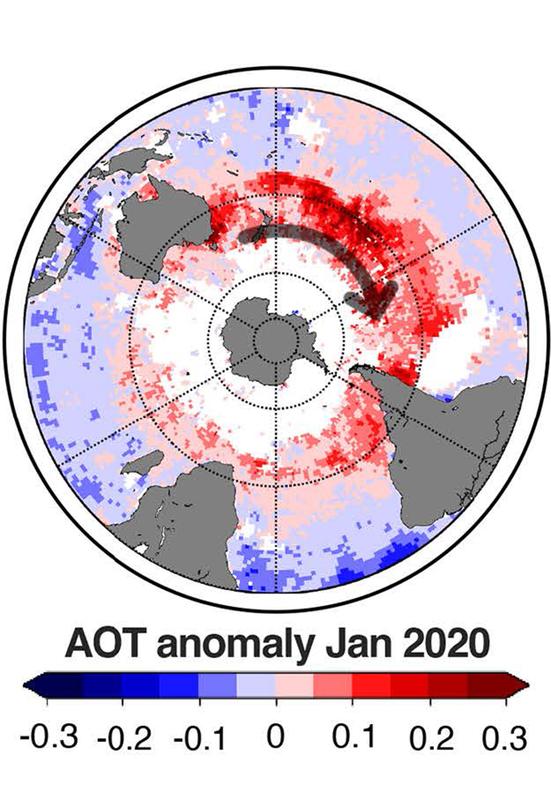 Leipzig. The 2019/20 wildfires in Australia transported more smoke into the atmosphere than observed ever before anywhere in the world. In the so-called Black Summer, three times as many particles reached high air layers as in the previous record wildfires in Canada during summer 2017. Two analyses led by the Leibniz Institute for Tropospheric Research (TROPOS) now reveal the climate impact of these huge fires: Smoke particles with a total mass of around one million tonnes spread across the southern hemisphere and affected the climate for about one and a half years by warming the upper atmosphere and cooling the lower atmosphere close to Earth’s surface.

From the subtropics to Antarctica, sunlight was dimmed even more than during the eruption of the volcano Pinatubo in 1991. The smoke probably also contributed to the record ozone hole over Antarctica in 2020, forming a vortex of 1000 kilometres in diameter that passed over the southern hemisphere for several weeks, which is considered the first evidence that smoke from wildfires can also alter high-altitude winds in the stratosphere. Since such extreme fires are expected to become more frequent due to climate change, it is very important to consider the smoke and its effects on the Earth's energy balance in climate scenarios, the researchers write in the journal Atmospheric Chemistry and Physics (ACP).

Between September 2019 and January 2020, almost twice as much area burned as in any other extreme fire in Australia documented to date. The fires peaked between 29 December 2019 and 4 January 2020, which is why they are now referred in scientific literature as the Australian New Year Super Outbreak (ANYSO) and colloquially known as the Black Summer bushfires. Due to the high heat, 38 fire clouds (Pyrocumulonimbus, PyroCb for short) were formed, which transported the smoke to great heights at ten times the speed of an elevator. More than half of these PyroCb clouds transported the smoke particles directly up to a height of 14 to 16 kilometres into the lower stratosphere. As with a volcanic eruption, the same applies to wildfires: the higher the particles reach, the further they spread and the more long-lasting is their effect on the climate. Particles in the lower atmospheric layers are usually washed out quickly by precipitation (within days to a few weeks) and therefore have little effect on the climate.

The wildfires in South-eastern Australia emitted about 1 million tonnes of smoke particles into the atmosphere around the turn of the year 2019/20. This is about four times as much as in previous years' forest fires. The smoke particles dispersed through the mid-latitudes of the southern hemisphere within a few days due to the high-altitude winds and contain, among other things, soot aerosol. These dark particles absorb solar energy and are among the strongest warming short-lived climate forcers. However, smoke from such extreme forest fires has not yet been adequately represented in aerosol climate models. An international research team led by TROPOS has therefore analysed the Black Summer wildfires to better understand the impact of such events on the climate.

Many measurements in the southern hemisphere provide a puzzle picture

For their study, the researchers used satellite data of the optical thickness of aerosol layers (AVHRR of the National Oceanic and Atmospheric Administration (NOAA) and the CALIOP space lidar). They compared the atmospheric opacity with the solar photometer measurements of the international AERONET network, which operates stations in Punta Arenas (Chile), Amsterdam Island (Indian Ocean), Marambio (near the Antarctic Peninsula), Vechernaya Hill (East Antarctica) and at the South Pole, among others. Moreover, the long-term observations carried out with two ground-based Raman lidars in Punta Arenas (Chile) and Río Grande (Argentina) at the southernmost tip of South America were decisive. These measurements can be considered representative of the southern part of the Southern Hemisphere and also allowed comparisons with other extreme wildfires in the Northern Hemisphere. Both measurements originally had different scientific objectives: The lidar observations in Punta Arenas took place as part of the DACAPO-PESO campaign (Dynamics, Aerosol, Cloud And Precipitation Observations in the Pristine Environment of the Southern Ocean) from November 2018 to November 2021. The main objective of this measurement campaign by the University of Magallanes (UMAG), TROPOS and Leipzig University was to study aerosol-cloud interaction processes under the clean conditions of the Southern Hemisphere. The lidar observations in Río Grande were part of the HALO mission SOUTHTRAC-GW (Southern Hemisphere Transport, Dynamics, and Chemistry-Gravity Waves), in which a large international team led by the German Aerospace Center (DLR) investigated atmospheric gravity waves in South America with the HALO research aircraft in September 2019. DLR's Compact Rayleigh Autonomous Lidar (CORAL) was also used, providing important data on the optical properties of the smoke between 15 and 30 kilometres altitude. The large amount of data made it possible to observe a new phenomenon, to compare the wildfires with previous record wildfires in North America and also to establish connections to the ozone hole:

It has long been known that wildfires virtually make their own weather, but a new phenomenon was observed in connection with the Black Summer fires in January-March 2020: A self-sustaining vortex with a diameter of about 1000 km and a vertical extent of about 5 km. This extremely stable vortex persisted in the stratosphere for over 13 weeks, crossed the Pacific eastwards within two weeks and hovered over the tip of South America for more than a week. This was followed by a 10-week journey around the world in a westerly direction that could be tracked for more than 66 000 km by early April 2020. The vortex transported smoke and moisture up to an altitude of 35 km - an altitude not reached by tropospheric aerosols since the eruption of the Pinatubo volcano. This vortex trapped the smoke particles, keeping them from being dispersed and diluted. The absorption of solar radiation by the smoke in the centre led to warming and counter clockwise circulation, like a high-pressure area in the southern hemisphere. "Nothing like this has been observed before. This is the first evidence that smoke also causes changes in winds in the stratosphere and opens up a whole new direction of scientific research. The influence of wildfires on the atmosphere could be much greater than we previously thought," underlines Dr Albert Ansmann from TROPOS.

ANYSO as the new "record holder

Lidar measurements by TROPOS from previous years made it possible to compare the wildfires in Australia with two other large fires: The record-breaking wildfires in Canada (Pacific Northwest Event, PNE) in August 2017 had transported only about a third of aerosol mass into the upper stratosphere in comparison. During this event, the smoke from five fire clouds over British Columbia could be observed over Europe until January 2018. Extremely strong fires also occurred in July/August 2019 in Siberia north and northeast of Lake Baikal (SIberian Lake Baikal Event, SILBE), where no fire clouds were observed. The smoke therefore probably rose slowly to high altitudes via solar radiation within a week. Through lidar measurements on the research icebreaker Polarstern, smoke from these fires could be observed in the region around the North Pole during the international MOSAiC expedition between October 2019 and May 2020.

Smoke as a catalyst for the ozone hole?

In 2020/21, three events with record-breaking ozone depletion were observed: An extremely strong ozone hole formed over the central Arctic in March/April 2020, and further extreme ones over Antarctica in September to November 2020 and 2021, respectively. During all three events, an unusually large amount of smoke floated in the atmosphere of the polar regions, as shown by the lidar measurements. From the researchers' point of view, this is a clear indication of correlations, as they observed a clear correspondence between the layer with the strongest ozone depletion above the stations of the ozone probes (14-25 km altitude), the layer with an increased particle surface concentration above Punta Arenas (10-24 km altitude) and the altitude range in which the CALIOP satellite data detected polar stratospheric clouds (mainly above Antarctica at 13-26 km altitude). "Polar stratospheric clouds (PSCs) are known to have chemical processes at their surfaces that accelerate ozone depletion. Therefore, we strongly suspect that the smoke has led to these high clouds and that these clouds in turn have led to severe ozone depletion. This would not be good news for the people in and around the polar regions. If, as expected, climate change leads to more frequent and more severe wildfires, the ozone holes would spread over the Arctic and Antarctic, and with them the risk of skin cancer," explains Kevin Ohneiser from TROPOS.

The data were also used for a simulation with the modern global aerosol climate model ECHAM6.3-HAM2.3. This model uses an aerosol microphysics model to describe the development of different aerosol types. This allows to estimate their influence on the radiation balance of the atmosphere: The model simulations determined a heating effect in the upper atmosphere (TOA) of +0.5 watts per square metre in the southern hemisphere and +0.25 watts per square metre globally. At the Earth's surface (bottom of the atmosphere, BOA), the solar radiative forcing was estimated to be about -0.75 watts per square metre under clear skies. This corresponds to the cooling effect caused by a large volcanic eruption. "We were surprised at how much the wildfires in southeastern Australia increased the opacity of the upper air layers of the southern hemisphere, hence, changing the radiation balance. These changes influenced the climate in the southern hemisphere for one and a half years. However, they can essentially be attributed to only four days of smoke from pyroconvection," emphasises Dr Bernd Heinold from TROPOS.

The impact of wildfire aerosol on the energy balance of fires with such high-level fire clouds has probably been underestimated in models so far, as the vertical smoke distribution is crucial for the radiative effect, but there has been little knowledge about this wildfire property. "Such improvements are essential for any estimate of the Earth's energy balance and climate state. Therefore, it is becoming increasingly important to better enable climate models to deal with the impact of wildfires on the atmosphere, as they are expected to increase in frequency and severity worldwide in response to anthropogenic climate warming," explains Prof. Ina Tegen from TROPOS. "The increased risk of severe wildfires is related to extreme drought. More frequent and intense weather extremes also increase the likelihood that these very high reaching fire clouds will form more frequently in the future." Record-breaking fires like the one in Australia in 2019/20 could be repeated in other regions of the world in the years to come and have an increasing impact on the global climate.
Tilo Arnhold

The Leibniz Institute for Tropospheric Research (TROPOS) is a member of the Leibniz Association, which connects 97 independent research institutions that range in focus from the natural, engineering and environmental sciences via economics, spatial and social sciences to the humanities. Leibniz Institutes address issues of social, economic and ecological relevance. They conduct knowledge-driven and applied basic research, maintain scientific infrastructure and provide research-based services.
The Leibniz Association identifies focus areas for knowledge transfer to policy-makers, academia, business and the public. Leibniz institutions collaborate intensively with universities – in the form of “Leibniz ScienceCampi” (thematic partnerships between university and non-university research institutes), for example – as well as with industry and other partners at home and abroad.
They are subject to an independent evaluation procedure that is unparalleled in its transparency. Due to the importance of the institutions for the country as a whole, they are funded jointly by the Federation and the Länder, employing some 20,500 individuals, including 11,500 researchers.
The entire budget of all the institutes is approximately 2 billion euros. They are financed jointly by the Federal Government and the Länder. The basic funding of the Leibniz Institute for Tropospheric Research (TROPOS) is therefore financed by the Federal Ministry of Education and Research (BMBF) and the Saxon State Ministry of Science and the Arts (SMWK). The Institute is co-financed with tax revenues on the basis of the budget approved by the Saxon State Parliament.
https://www.leibniz-gemeinschaft.de/en/home/
https://www.bmbf.de/en/index.html
https://www.smwk.sachsen.de/