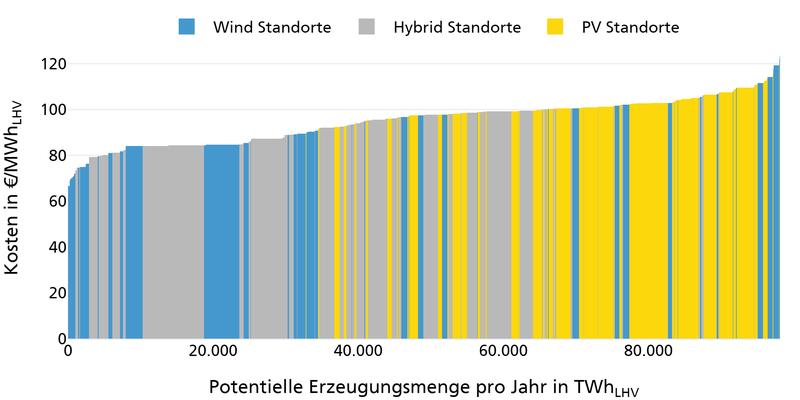 Green ammonia is becoming increasingly important in the debate about PtX imports and climate protection. There are good reasons for this, as the effort required to produce and transport the chemical compound is relatively low. Fraunhofer IEE in Kassel has therefore now expanded its global PtX atlas: it now also provides data on the production potential of green ammonia in 97 countries and areas worldwide, and also shows the respective production and transport costs. The PtX Atlas, which is freely accessible online, shows where in the world which quantities of green hydrogen and other PtX energy carriers can be produced and exported to Europe at what cost.

With the expansion of the PtX Atlas, the Fraunhofer researchers in Kassel have added the model results for green ammonia to the detailed analyses of nearly 600 sites. "Our analyses provide a long-term outlook on the import possibilities of green ammonia, i.e. ammonia produced with renewable energies," says project manager Maximilian Pfennig from the Fraunhofer Institute for Energy Economics and Energy System Technology IEE. "For example, the PtX Atlas highlights the locations around the world where producing green ammonia from hydrogen generated with renewable electricity for export to Europe is viable - and where other PtX energy carriers have advantages."

The analyses for the 2050 scenario reveal that the total costs of ammonia are in many cases lower than those of e-fuels, methanol, and liquid methane and hydrogen. "Green ammonia, as an imported product and alternative to fossil fuels, can thus make a key contribution to the defossilization of the energy and resource markets in Europe," explains Pfennig.

The extension of the PtX-Atlas to include green ammonia has been financially supported by the German Federal Ministry for Economy and Climate Protection as part of the project "DeV-KopSys 2 - Robust ways to achieve the climate goals of transport in feedback with the energy system" in the program "Renewable Mobile".

Ammonia can either be used directly, for example for the production of fertilizers and chemicals, or as an energy source for hydrogen. The nitrogen-hydrogen compound is produced in the so-called Haber-Bosch process. If the hydrogen used comes from electrolysis with electricity from renewable sources, the ammonia can carry the "green" label - it is largely climate-neutral.

Unlike hydrogen, ammonia can be liquefied and stored without major energy input and is thus easy to transport. Since ammonia is an established product in the resource market, global infrastructures for storage and transport already exist, such as tankers.

In comparison with liquid PtX hydrocarbons such as e-fuels, methane and methanol, green ammonia has the advantage that no carbon dioxide is required for its production. The nitrogen required can be obtained without great effort from the ambient air, where it is available in large quantities.

Considering only the production of green ammonia, Chile is, according to the analyses, the world's most cost-effective location, with costs of 67 euros per megawatt hour. The global average is 92 euros per megawatt hour. This makes ammonia about 21 percent cheaper to produce than e-fuels and methanol. However, compared to liquid hydrogen, the production of ammonia entails five percent higher costs.

The advantage of liquid hydrogen recedes when transport is taken into account: Since specially equipped ships have to be used for long distances, transportation by sea is very expensive. "In many cases, liquid hydrogen is only competitive with ammonia if the ammonia is not used directly, but has to be converted into hydrogen in Europe at great expense," summarizes project manager Pfennig.

The extended PtX Atlas also shows that the import costs of ammonia are lower than those of e-fuels, methanol and liquid methane. When imported from nearby regions such as Morocco, the costs are around 18 percent lower, for more distant countries such as Australia the costs are still seven percent lower.

Canada is the world's most favorable location

The conditions for ammonia imports from Canada are particularly good. In no other country with large land potentials for sustainable PtX production as well as good socio-economic conditions, are the total costs - production plus transport - as low as there. The European energy industry is already anticipating its first imports from Canada and has recently signed agreements to supply up to one million tons of green ammonia starting in 2025, to be produced on the country's east coast. In addition, the German and Canadian governments have entered into a hydrogen partnership.

Chile, Argentina or Morocco are also promising countries for importing green ammonia to Europe. Here, the total costs average around 100 euros per megawatt hour. Morocco could become particularly important in this respect: the country is already one of the world's largest exporters of fertilizer. Its experience and expertise in handling ammonia are therefore extensive and the necessary infrastructure is also already well developed.

The methodological approaches and the data basis as well as the most important aggregated results of the analyses are described by the Fraunhofer researchers in a working paper: https://arxiv.org/abs/2208.14887