Pushing the boundaries of chemistry: Properties of heaviest element studied so far measured at GSI/FAIR 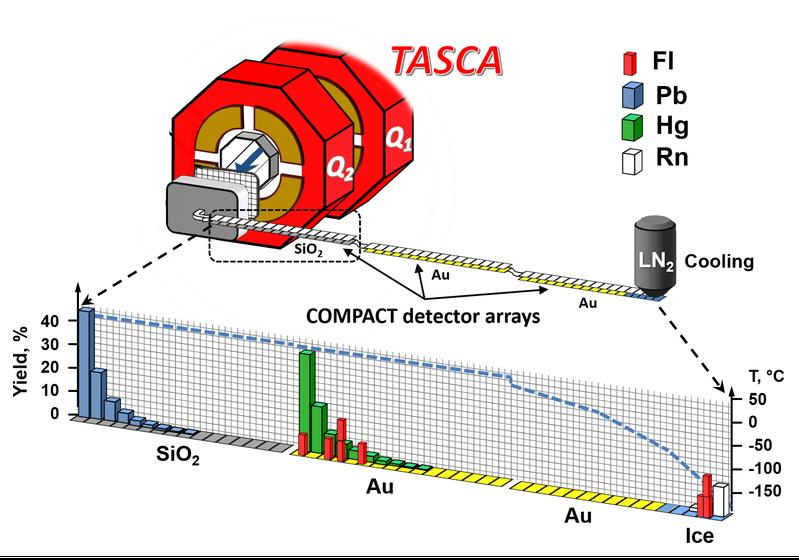 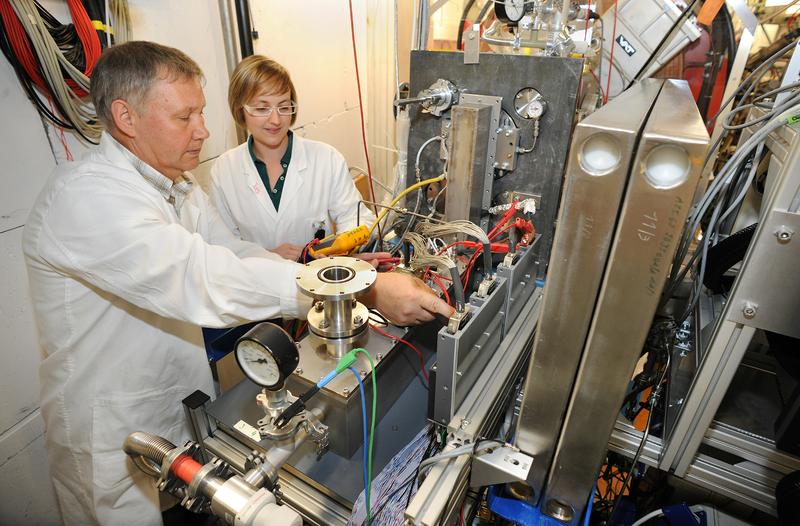 An international research team has succeeded in gaining new insights into the chemical properties of the superheavy element flerovium — element 114 — at the accelerator facilities of the GSI Helmholtzzentrum für Schwerionenforschung in Darmstadt. The measurements show that flerovium is the most volatile metal in the periodic table. Flerovium is thus the heaviest element in the periodic table that has been chemically studied.

With the results, published in the journal “Frontiers in Chemistry”, GSI confirms its leading position in the study of the chemistry of superheavy elements and opens new perspectives for the international facility FAIR (Facility for Antiproton and Ion Research), which is currently under construction.

Under the leadership of groups from Darmstadt and Mainz, the two longest-lived flerovium isotopes currently known, flerovium-288 and flerovium-289, were produced using the accelerator facilities at GSI/FAIR and were chemically investigated at the TASCA experimental setup. In the periodic table, flerovium is placed below the heavy metal lead. However, early predictions had postulated that relativistic effects of the high charge in the nucleus of the superheavy element on its valence electrons would lead to noble gas-like behavior, while more recent ones had rather suggested a weakly metallic behavior. Two previously conducted chemistry experiments, one of them at GSI in Darmstadt in 2009, led to contradictory interpretations. While the three atoms observed in the first experiment were used to infer noble gas-like behavior, the data obtained at GSI indicated metallic character based on two atoms. The two experiments were unable to clearly establish the character. The new results show that, as expected, flerovium is inert but capable of forming stronger chemical bonds than noble gases, if conditions are suitable. Flerovium is consequently the most volatile metal in the periodic table.

Flerovium is thus the heaviest chemical element whose character has been studied experimentally. With the determination of the chemical properties, GSI/FAIR confirm their leading position in the research of superheavy elements. “Exploring the boundaries of the periodic table has been a pillar of the research program at GSI since the beginning and will be so at FAIR in the future. The fact that a few atoms can already be used to explore the first fundamental chemical properties, giving an indication of how larger quantities of these substances would behave, is fascinating and possible thanks to the powerful accelerator facility and the expertise of the worldwide collaboration,” elaborates Professor Paolo Giubellino, Scientific Managing Director of GSI and FAIR. “With FAIR, we are bringing the universe into the laboratory and explore the limits of matter, also of the chemical elements.”

The experiments conducted at GSI/FAIR to clarify the chemical nature of flerovium lasted a total of six weeks. For this purpose, four trillion calcium-48 ions were accelerated to ten percent of the speed of light every second by the GSI linear accelerator UNILAC and fired at a target containing plutonium-244, resulting in the formation of a few flerovium atoms per day.

The formed flerovium atoms recoiled from the target into the gas-filled separator TASCA. In its magnetic field, the formed isotopes, flerovium-288 and flerovium-289, which have lifetimes on the order of a second, were separated from the intense calcium ion beam and from byproducts of the nuclear reaction. They penetrated a thin film, thus entering the chemistry apparatus, where they were stopped in a helium/argon gas mixture. This gas mixture flushed the atoms into the COMPACT gas chromatography apparatus, where they first came into contact with silicon oxide surfaces. If the bond to silicon oxide was too weak, the atoms were transported further, over gold surfaces — first those kept at room temperature, and then over increasingly colder ones, down to about -160 °C. The surfaces were deposited as a thin coating on special nuclear radiation detectors, which registered individual atoms by spatially resolved detection of the radioactive decay. Since the decay products undergo further radioactive decay after a short lifetime, each atom leaves a characteristic signature of several events from which the presence of a flerovium atom can unambiguously be inferred.

One atom per week for chemistry

“Thanks to the combination of the TASCA separator, the chemical separation and the detection of the radioactive decays, as well as the technical development of the gas chromatography apparatus since the first experiment, we have succeeded in increasing the efficiency and reducing the time required for the chemical separation to such an extent that we were able to observe one flerovium atom every week,” explains Dr. Alexander Yakushev of GSI/FAIR, the spokesperson for the international experiment collaboration.

Six such decay chains were found in the data analysis. Since the setup is similar to that of the first GSI experiment, the newly obtained data could be combined with the two atoms observed at that time and analyzed together. None of the decay chains appeared within the range of the silicon oxide-coated detector, indicating that flerovium does not form a substantial bond with silicon oxide. Instead, all were transported with the gas into the gold-coated portion of the apparatus within less than a tenth of a second. The eight events formed two zones: a first in the region of the gold surface at room temperature, and a second in the later part of the chromatograph, at temperatures so low that a very thin layer of ice covered the gold, so that adsorption occurred on ice.

From experiments with lead, mercury and radon atoms, which served as representatives of heavy metals, weakly reactive metals as well as noble gases, it was known that lead forms a strong bond with silicon oxide, while mercury reaches the gold detector. Radon even flies over the first part of the gold detector at room temperature and is only partially retained at the lowest temperatures. Flerovium results could be compared with this behavior.

Apparently, two types of interaction of a flerovium species with the gold surface were observed. The deposition on gold at room temperature indicates the formation of a relatively strong chemical bond, which does not occur in noble gases. On the other hand, some of the atoms appear never to have had the opportunity to form such bonds and have been transported over long distances of the gold surface, down to the lowest temperatures. This detector range represents a trap for all elemental species. This complicated behavior can be explained by the morphology of the gold surface: it consists of small gold clusters, at the boundaries of which very reactive sites occur, apparently allowing the flerovium to bond. The fact that some of the flerovium atoms were able to reach the cold region indicates that only the atoms that encountered such sites formed a bond, unlike mercury, which was retained on gold in any case. Thus, the chemical reactivity of flerovium is weaker than that of the volatile metal mercury. The current data cannot completely rule out the possibility that the first deposition zone on gold at room temperature is due to the formation of flerovium molecules. It also follows from this hypothesis, though, that flerovium is chemically more reactive than a noble gas element.

International and interdisciplinary collaboration as the key to understanding

The exotic plutonium target material for the production of the flerovium was provided in part by Lawrence Livermore National Laboratory (LLNL), USA. In the Department of Chemistry’s TRIGA site at Johannes Gutenberg University Mainz (JGU), the material was electrolytically deposited onto thin titanium foils fabricated at GSI/FAIR. “There is not much of this material available in the world, and we are fortunate to have been able to use it for these experiments that would not otherwise be possible,” said Dr. Dawn Shaughnessy, head of the Nuclear and Chemical Sciences Division at LLNL. “This international collaboration brings together skills and expertise from around the world to solve difficult scientific problems and answer long-standing questions, such as the chemical properties of flerovium.”

“Our accelerator experiment was complemented by a detailed study of the detector surface in collaboration with several GSI departments as well as the Department of Chemistry and the Institute of Physics at JGU. This has proven to be key to understanding the chemical character of flerovium. As a result, the data from the two earlier experiments are now understandable and compatible with our new conclusions,” says Christoph Düllmann, professor of nuclear chemistry at JGU and head of the research groups at GSI and at the Helmholtz Institute Mainz (HIM), a collaboration between GSI and JGU.

How the relativistic effects affect its neighbors, the elements nihonium (element 113) and moscovium (element 115), which have also only been officially recognized in recent years, is the subject of subsequent experiments. Initial data have already been obtained as part of the FAIR Phase 0 program at GSI. Furthermore, the researchers expect that significantly more stable isotopes of flerovium exist, but these have not yet been found. However, the researchers now already know that they can expect to find a metallic element.