The Ocean Floor under the Microscope 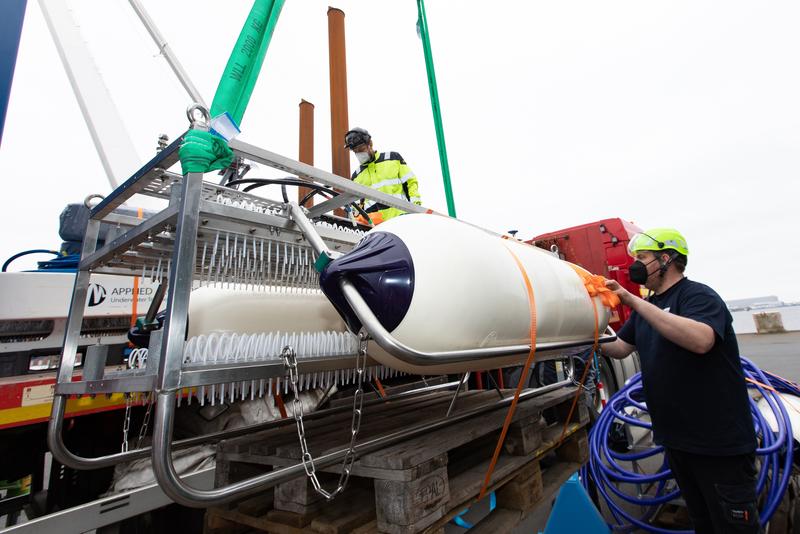 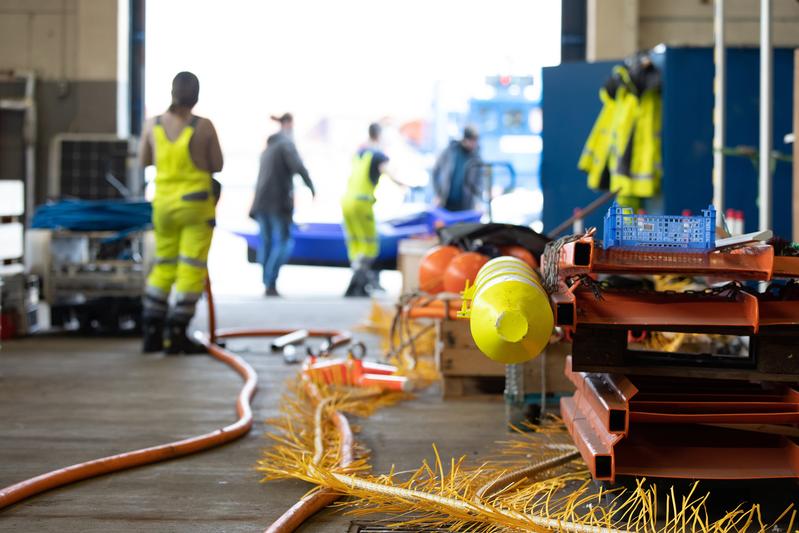 In order for the energy transition to succeed, offshore wind energy needs to be massively expanded. This is not possible without precise knowledge of the ground. Researchers from the U Bremen Research Alliance have developed a method specially tailored to the requirements of the North Sea and Baltic Sea that uses seismic measurement methods to record and identify the subsurface. This enables more efficient and cost-effective construction.

From the outside, the thick cable, which is rolled up on a drum and loaded onto the Fugro Searcher survey ship in Bremerhaven, looks like any other cable. However, what is hidden underneath the cable sheath is high-tech. Highly sensitive microphones are fitted at intervals of one meter. "We pull the measuring cable behind the ship," explains Dr. Stefan Wenau, senior scientist at the Fraunhofer Institute for Wind Energy Systems IWES, a member institution of the U Bremen Research Alliance. "The microphones then pick up the sound waves that a signal source has previously emitted."

"Sparker" is the name of this source, which is also towed through the water. Its sound waves penetrate several hundred meters deep into the seafloor, the sediment layers reflect them, and send them back to the surface. There, microphones in the cable, which is a good 100 meters long, record the signals. "Due to the large number of receivers, we record individual points in the seabed several times. This makes it easier to reconstruct," says Wenau, explaining the principle of high-resolution multichannel seismics. The data is used to create a layer model, a two-dimensional image of the subsoil.

--- The foundation costs account for a significant proportion of the total costs of an offshore wind farm. ---

"N 9" is the name of the Fugro Searcher's target, an area of a good 10 x 20 nautical miles in the western North Sea, which the Federal Office of Hydrography and Shipping (BSH) has designated as an area for an offshore wind farm. For two or three months, the ship will be underway with occasional breaks to pre-survey this and other areas in the North Sea, scanning its profile lines at 150-meter intervals. "Two years ago, we were offshore for just three weeks," Wenau recalls. At the time, the Department of Sub-surface Investigations at Fraunhofer IWES had eight employees; today it has 25.

A high wind yield, no complaining neighbors: offshore wind energy has gained enormous momentum, despite high development costs. Around eight gigawatts of rated capacity are currently installed in the German North and Baltic Seas. The German government has set a target of at least 30 gigawatts by 2030. This requires new areas. And knowledge of the properties of the subsurface is an indispensable prerequisite for their planning.

The foundation costs account for a significant proportion of the total costs of an offshore wind farm. Information about the ground conditions is therefore of enormous importance for potential operators. Which type of foundation is best suited for the ground? How deep must the foundation be driven into the ground? What diameter should it have? Exactly which location is best for a wind turbine? "These are questions that are clarified using our geological model," Wenau explains.

Surveying the subsoil provides only initial clues. Based on its results, locations for boreholes are determined and probes are pressed into the ground to obtain more detailed knowledge about the properties of the subsurface. In the end, this information is merged into a subsurface model that serves as the basis for the design of the foundations and enables a risk analysis for the subsequent installation.

The forces acting on an offshore wind turbine are extreme: storms, high waves, and bad weather all pull on the wind turbines, which are getting bigger and heavier. The total weight of a turbine can quickly exceed 1000 tons, and the rotor diameter can reach 200 meters and more. In order to anchor them permanently and stably in the seabed, there are various types of foundation, depending on weight, water depth, and the nature of the ground. A good three-quarters of all turbines in German waters are built on monopiles - large steel tubes, often ten meters in diameter, that are driven into the ground to a depth of up to 80 meters. Four-legged, truss-like steel structures known as jackets are also often used. Their bases end in sleeves held in place by foundation piles driven into the seabed.

The most common obstacles in the sediment are boulders several meters in size and unruly cohesive layers, at least in the North Sea. Their geology is characterized by glacial deposits from the Ice Age, and the soil is mainly composed of sand, clay, and peat. The clay in particular can become a problem. "If you hammer a pile through the clay, the material can get stuck, and you can't get the foundation in," Wenau says.

The geology of the Baltic Sea, on the other hand, is older. The top layer of the seabed often consists of loose silt, with mostly glacial till underneath, sometimes with larger boulders. In the following chalk layer, so-called flintstones can form, which is another obstacle. The more accurate the knowledge of their location, the more precisely the foundations can be planned and the lower the costs and risks.

--- “The fact that we started our research so early is paying off today.” ---

To better detect boulders, Fraunhofer IWES uses a technology that is unique worldwide: a patented "boulder detection system." "Our entire technology is designed to image the seafloor as accurately as possible down to a depth of 200 to 300 meters. Very few people internationally can do that," Wenau emphasizes.

The boulder detection is a result of a research project with the Marine Technology – Environmental Research Department of the University of Bremen, headed by Professor Dr. Volkhard Spieß. Both institutions of the U Bremen Research Alliance cooperate closely with each other. The idea and the concept for the process came from the university, the implementation was a joint production. The Department of Sub-surface Investigations at Fraunhofer IWES first emerged from the university in the early 2010s. "We complement each other very well," says Spieß. "As a university, we can focus on topics that are still in the experimental phase." While Fraunhofer IWES focuses more on applications.

Spieß, a geophysicist, has been researching high-resolution seismic for wind farm development in shallower waters such as the North Sea and Baltic Sea since the early 2000s. Back then, offshore wind farms were still exotic, a far cry from a boom. "The fact that we were involved so early is paying off today," Spieß says. "We're also a bit proud of that." Bremen is a world leader in this technology. Its students are in demand and do not have to worry about finding jobs. They often transfer to Fraunhofer IWES.

That was the case for Stefan Wenau, who embodies the cooperation like no other. After studying geology in Freiberg, the now 36-year-old was drawn to the University of Bremen. He followed his master's degree with a PhD in Professor Spieß's research group, where he worked for a few more years before moving to Fraunhofer IWES. "The great attraction of the job is its diversity - and that I can use my knowledge for the energy transition. That's very important to me," Wenau says. "I'm involved in everything from navigating the ship, to processing the data and creating the layer model, to developing new research projects."

How to make surveying technology more efficient? How to map the subsurface more accurately? These are important topics for offshore wind turbines, and the researchers in the U Bremen Research Alliance are working on them together. "The better the model, the more precise and cost-effective the planning," says Wenau. The time factor also plays an important role. Building a wind farm has a lead time of five to six years. "If we want to achieve the expansion targets, we have to pick up the pace massively."

The University of Bremen and twelve non-university research institutes financed by the federal government cooperate within the U Bremen Research Alliance.

Twice per year, the Impact science magazine provides an exciting insight into the effects of cooperative research in Bremen. "The Ocean Floor under the Microscope" was published in issue 6 (June 2022).