More than microscopes can show 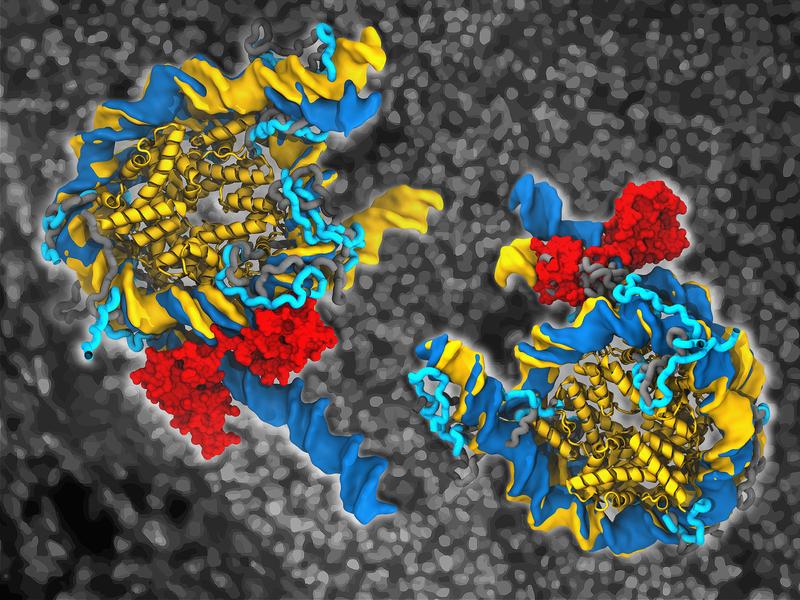 A key protein for converting adult stem cells into cells that resemble embryonic stem cells has been visualized in unprecedented detail by an international team of researchers around Hans Schöler and Vlad Cojocaru of the Max Planck Institute for Molecular Biomedicine in Münster. By combing experiments and computer simulations, the team visualized how the Oct4 protein binds and opens short pieces of DNA while wrapped around nuclear storage proteins (histones), just like in our genome. The results were published in the journal Nucleic Acids Research on September 22.

Adult cells can be converted into embryonic stem cell-like cells (induced pluripotent cells, iPSCs) using a cocktail of just four proteins. In recent years, this cellular reprogramming technology has contributed immensely to disease modelling, drug development, and cell replacement therapies. However, many questions about the molecular mechanisms of this conversion remain unanswered. For example, one essential step is the opening of DNA in the cells to be converted. Each of our cells contains about two meters of DNA packed in a structure known as chromatin. In chromatin, the DNA is tightly wrapped around histones in repeating structural units known as nucleosomes. So, how do these four proteins open the DNA when expressed in adult cells?

Three of the four proteins were described to be pioneer transcription factors, meaning they bind to specific sequences of DNA while they are wrapped in nucleosomes and have the capacity to directly or indirectly open chromatin. Among the three, Oct4 stands out because it is essential for the maintenance of embryonic stem cells of different species and for reprogramming of human cells. Oct4 was discovered in the late 80’s by Hans Schöler at approximately the same time as two other laboratories and is the only irreplaceable factor in Shinya Yamanaka’s Nobel Prize winning cocktail for reprogramming adult cells to pluripotent cells. About 10 years ago, Abdenour Soufi and Ken Zaret described regions of packaged DNA that are bound by Oct4 in the early stages of reprogramming.

Caitlin MacCarthy, a postdoc in Hans Schöler’s group and one of the main authors of the study, provided the wet-lab experiments. Reflecting on her work, MacCarthy explains: “The experiments were more challenging than we anticipated. Working with genomic or native nucleosomes becomes rather technical because they are highly dynamic, unlike engineered sequences that are more stable. Still, we were able to show precisely where Oct4 binds to them.” So what happens when Oct4 binds nucleosomes?

To answer this, Jan Huertas, also a main author of the study, provided the simulations which he performed during his PhD studies at MPI Münster. He and Vlad Cojocaru used the computational nanoscope to visualize how Oct4 binds to nucleosomes and affects their structure. The term computational nanoscope is used by researchers to refer to a set of computer simulation methods that enable them to visualize the movements of molecules over time. The accuracy of these methods is now so high that one can imagine observing the molecules under a very high-resolution microscope. Nucleosomes, like all macromolecular structures in our cells, are dynamic. They move, twist, breath, unwrap, and wrap again. Visualizing these motions in experiments is often impossible. Huertas explains: “It is so amazing to be able to watch these large molecular structures with all their atoms move on the computer and know that what you see is very close to what actually happens.”

In the real-time movies of Oct4-nucleosome complexes they generated, each showing 1 to 3 microseconds of the lifetime of the complex, Huertas and Cojocaru observed how Oct4 is capable of opening the nucleosomes. They described in atomic detail the mechanisms of this opening by comparing movements of free and Oct4-bound nucleosomes. Interestingly, the opening depended on the position of the DNA sequence recognized by Oct4 on the nucleosome and on the mobility of terminal flexible regions of the histones, known as histone tails.

The researchers are excited about the implications of their work and future perspective. Cojocaru, now a leading researcher at the Babeş-Bolyai-University also holding appointments as a senior researcher at the Utrecht University, and visiting scientist at the MPI Münster concludes: “We show here for the first time in atomic detail not only how Oct4 binds to different nucleosomes, but also how Oct4 binding together with the histone tails affect the structural flexibility of these nucleosomes.” MacCarthy adds explaining why this is so exciting: “because the histone tails, like pioneer factors, are also key regulators of gene expression. While pioneer factors bind to DNA to open chromatin and activate genes, the histone tails bear chemical modifications which define the regions of open chromatin from which genes can be expressed.” Huertas explains further: “until now, it has been a mystery how histone tails affect the ability of pioneer factors to bind and open nucleosomes. Our work paves the way for future studies of other pioneer factors, many of which are key to cellular transformations, including cell fate conversions and cancer.” Cojocaru is convinced that “the mechanism we describe here fills a knowledge gap in the understanding of how factors like Oct4 induce cell fate transitions. Understanding these mechanisms will eventually provide means to optimize and control such transitions for successful use in therapies. And computer simulations will be at the heart of these future discoveries.”

The researchers acknowledge that this work could not have been possible without the high-performance computing resources provided by the Max Planck Computing and & Data Facility (www.mpcdf.mpg.de) and the Gauss Center for Supercomputing (https://www.gauss-centre.eu).