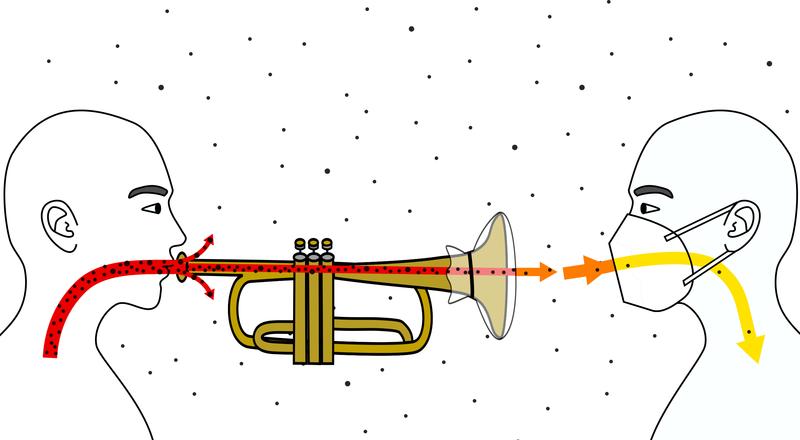 A relatively large number of viruses can emerge from the clarinet. It releases
considerably more aerosols, which can contain pathogens such as Sars-CoV-
2, compared to other instruments such as the flute. However, the risk of
transmission from an infected person on a wind instrument is generally much
lower than for people who sing or speak. This is the conclusion drawn by a research
team from the Max Planck Institute for Dynamics and Self-Organization (MPIDS)
in Göttingen and the University Medical Center Göttingen (UMG) in a
comprehensive study. The results provide clues how cultural events can be
organized with the lowest possible risk of infection, even during the
pandemic.

The riskiest instrument is the voice, at least when it comes to spreading viruses
such as Sars-CoV2. Compared to breathing quietly, during singing or speaking
infected people release more than 500 times particles into the air, which can
contain viruses. When people play music with wind instruments, considerably
less aerosol enters the environment than during singing - but still 5 to 50 times
more than during breathing, as studied by a team led by Mohsen Bagheri and
Eberhard Bodenschatz, director at the MPI-DS and professor at the Faculty of
Physics at the University of Göttingen.
Together with colleagues from the Institute of Hospital Hygiene and
Infectiology at the UMG, the researchers analyzed how many particles of what
size are released when 20 different wind instruments are played. They took the
measurements under controlled conditions in a clean room and determined the
upper limit for the risk of transmission with the omicron variant of Sars-CoV-2
from the results in each case. The study is available open access.

Risk of transmission depends on the instrument

"Surprisingly, we found that musical instruments are less risky than talking or
singing," says Mohsen Bagheri, head of a research group on aerosols at the
MPI-DS. As the Göttingen team's study shows, it is mainly the larger respiratory
droplets, which are particularly important for the transmission of viruses, that
remain trapped in wind instruments. The instruments thus act as a filter for
larger particles.
However, wind music is not harmless for the musicians and the audience from
an infection protection point of view. This is due to the fact that particles with a
size of less than five micrometers mostly emerge from the instrument.
They remain in the air for a longer time and spread further, so that they can reach
high concentrations, especially in unventilated rooms. The number of such small
particles released by wind music also depends strongly on the instrument: While
the team measured a very low concentration of released particles for various
flutes, the measurements yielded values for the clarinet almost as high as for
singing.
For example, at a distance of one and a half meters from a clarinet and trombone,
the risk of transmission is already up to 50 percent after four minutes. Yet, at the
same distance from a flute, this risk of transmission is only reached after three
hours. All values for other instruments measured were in between.

Masks for instruments and people protect

In its study, the team also investigated how efficient the risk of transmission
could be reduced by particle filters with similar properties to the fleece of FFP2
masks. They placed the prototype masks on the ends of brass instruments;
woodwind instruments were almost completely encased in the filter material.
"For brass instruments, an instrument mask reliably reduces the emission of
infectious particles," said Oliver Schlenczek, principal author of the study.
If, in addition, the audience also wears an FFP2 mask, the risk of transmission is
no more than 0.2 percent, even after one hour. Simone Scheithauer, Director of
the Institute for Hospital Hygiene and Infectiology at UMG, considers these
results to be very positive: "On this basis, we can recommend much more
targeted protective measures in the future and maintain musical cultural
activities with only minor restrictions even in critical situations," she says.
" With adequate ventilation and the wearing of FFP2 masks, lessons, rehearsals
and concerts with wind instruments can be conducted safely," concludes aerosol
researcher Eberhard Bodenschatz.