The Power of light: How light can be used to control processes in synthetic cells 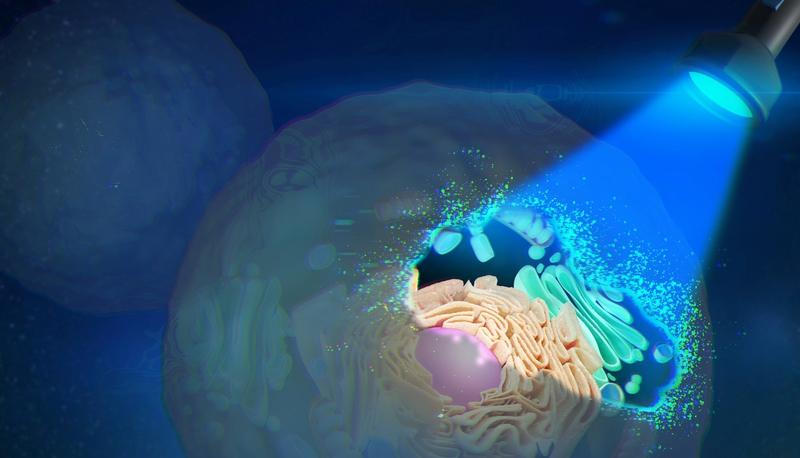 Synthetic – i. e. artificially produced - cells can imitate certain functions of biological cells. These synthetic cells could open up new medical possibilities in the future. In laboratories, such cells can already help in chemical processes on a miniature scale as "mini-reactors". Scientists at the Max Planck Institute for Polymer Research have now developed a method to control the course of these chemical processes with the help of light.

The processes that take place in biological cells are complex: chemical reactions contribute, for example, to the production of certain substances required by the body - whether to supply energy or to defend against disease. For this purpose, biological cells regulate via their cell membrane which substances are absorbed by the cell and which are excreted again.

Artificially produced cells with a size of approx. 20-50 millionth of a metre (20-50 µm) are already able to reproduce such functions in the laboratory. An active component is packed into a shell made of polymers, the so-called "compartment", which enables an enzymatic reaction, for example.

"A biological cell can die - with artificial cells we can build miniature reactors that can be used over a much longer period of time," explains Lucas Caire da Silva, who researches these cells in Katharina Landfester's department. "However, the problem with these mini-reactors so far has been how to control the transport of substances into the cell. In general, the shells of these artificial cells are difficult to permeate."

The team of researchers led by da Silva and Landfester have now changed this behaviour: They have designed special light-responsive molecules, which can be integrated into the polymer membranes to produce channels. As a result, the shell’s permeability increases when irradiated with UV light. If the shell is then irradiated with visible light again, this process can also be reversed.

"We can use this approach to precisely control when a substance enters the compartment, allowing us to initiate a chemical reaction at a specific time and place," says da Silva.

The scientists hope that in future they will be able to use their mini-reactors to control reactions that actually take place in biological cells on a micro-scale and see many applications for this technology, for example in medicine.

The researchers have now published their results in the journal "Angewandte Chemie".