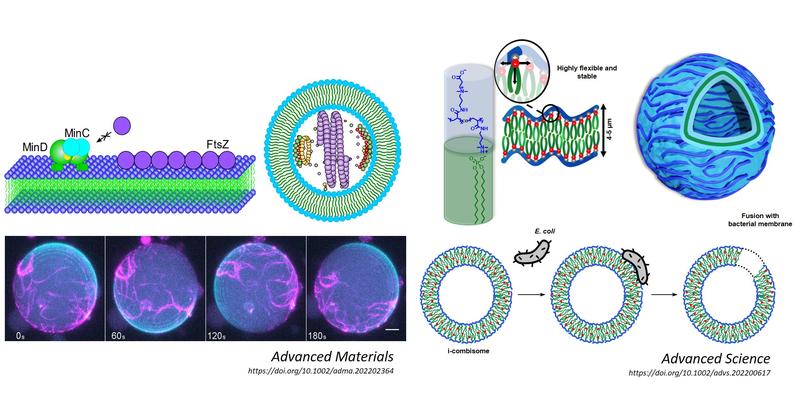 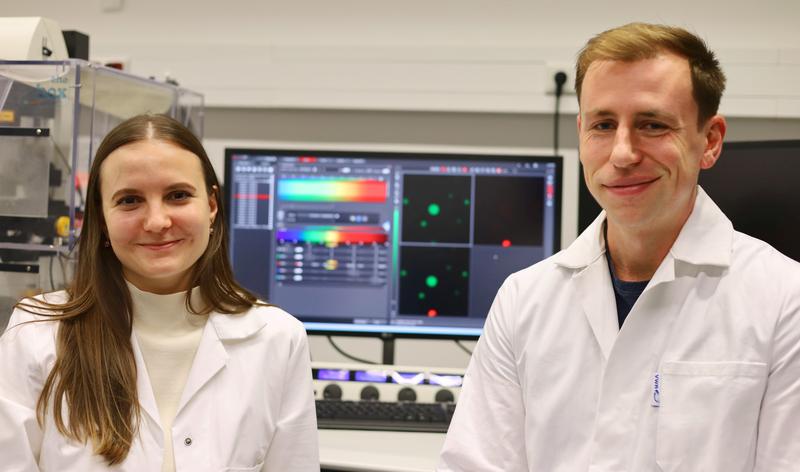 Scientists at DWI – Leibniz Institute for Interactive Materials have come one step closer to the objective of producing functional synthetic cells. The research group is probing the necessary ingredients for the design and development of materials with the ability to communicate and function with living matter. Such materials are used to study and develop antimicrobial surfaces or coatings that interact with blood for example. The research at DWI was directed by former working group leader César Rodriguez-Emmenegger, who is now professor at IBEC Barcelona. They published their new insights in the journals Advanced Materials and Advanced Science.

Producing synthetic cells in the laboratory, with the ability to mimic biological behavior and performing functions beyond life, is one of the greatest challenges in the field of bioinspired interactive materials. Central functions of biological behavior are, for example, the transport of molecules, metabolic functions, growth and, ideally, replication through cell division. Cell imitations that fulfil one or more of these functions are called protocells. In the future, they could be used to study complex biological questions, open new concepts in biomedicine, and help to develop new biomaterials, therapeutics and medical devices. An indispensable prerequisite for the development of such protocells is the ability to combine functional and active cell components as well as active cell machinery with synthetic components. In César Rodriguez-Emmenegger's group, scientists at DWI have come one step closer to achieving these goals.

Within the publication in Advanced Materials, the research team presents the successful integration, of active cell division machinery (divisome) in synthetic vesicles. A divisome consists of a highly complex protein system that is responsible for cell division in bacteria by forming a ring in the middle of the cell, which then constricts and cuts the bacteria in two identical sized daughter cells. For the divisome to work, it has to interact with the membrane of the synthetic cell with the same strength and dynamic as with natural membranes, a challenged not accomplished before. The researchers designed new macromolecular building blocks and programmed them to assemble in the membrane and interact with the divisome in a predetermined manner. This approach allowed the research team to accurately reproduce the behavior of the divisome in synthetic cells. "The first step of our research project was to produce suitable synthetic membrane building blocks. We decided to use a new family of Janus dendrimers that assemble into vesicular structures called dendrimersomes. Janus dendrimers are macromolecules that have a branching core and two opposite branches with different functional chemical groups. Since we can determine these groups ourselves, we are able to design the shape and properties of the macromolecules to allow reconstitution of the divisome within the vesicle," explains Anna Maria Wagner, PhD student and co-first author of the publication.

Until now, the reconstitution of complexes such as cell division machineries has been limited to applications in liposomes, natural vesicles made of lipids. With this work, the research team proves for the first time that these natural units can be incorporated into fully synthetic dendrimersomes without losing their basic functionality. This represents an impactful breakthrough for the construction of synthetic cells with biological components, as the adaptation of membrane-divisome interactions is key to the evolution of emergent biological behavior.

Moreover, as part of their work on protocells, Prof. Rodriguez-Emmenegger's team is interested in developing new synthetic cell membrane mimics capable of performing tasks inspired by and beyond cellular functions. Recently, together with Prof. Herrmann, Vice Scientific Director at DWI, they published a novel system for this in the journal Advanced Science, in which they report the development of ionically linked comb polymers that self-assemble in water into vesicles with biomimetic membrane thickness, which they named ionic combisomes (i-combisomes).

"The i-combisomes are an excellent example of how systems with tailored properties can be realized by precise molecular design and targeted programming of the type and strength of the molecular interactions" explains Jonas Quandt, PhD student at DWI. "Our system can be understood as a macromolecular analog to the phospholipids which are the building blocks of the natural cell membrane. It consists of a hydrophilic polymer scaffold to which we attach hydrophobic lipid-like tails via ionic interactions. By using the polymer scaffold as an anchor for the lipid-like tails, we increase the stability of the i-combisomes compared to liposomes. Such a unique molecular arrangement allows for flexibility and dynamics as in the natural membrane."

In their work, the scientists were able to show that the unique membrane topology leads to similar biophysical properties as the natural cell membrane and enables the seamless integration of functional components of natural membranes. These included co-assembly with (glyco)lipids and pore-forming peptides, which enable ion transport across the membrane. In addition, the scientists were able to create bacteria-combisome hybrids by capturing living bacterial cells and integrating their cell periphery into the synthetic membrane. Such fusion of synthetic and biological membranes has never been observed before in this manner.

The high degree of resemblance in the i-combisomes, the tunability of the chemical and biological composition of the membrane, and the ability to fuse with living matter can potentially lead to synthetic cells with enhanced functions. These could be used to study complex biological questions or to develop new concepts in biomedicine and provide a platform for drug delivery.