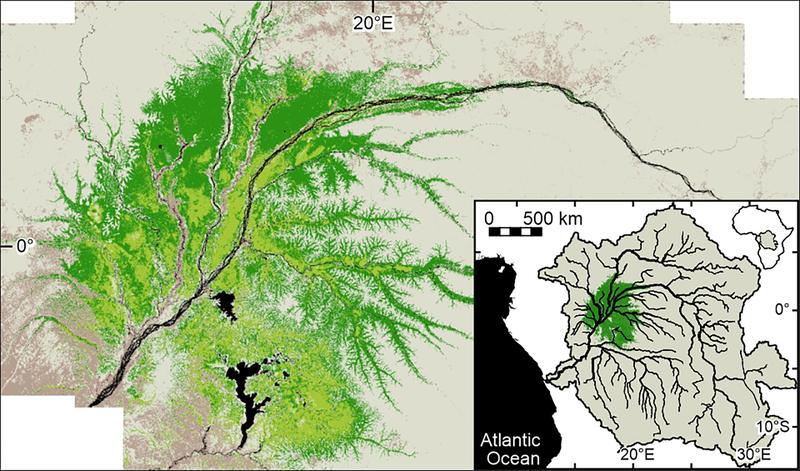 Researchers decipher the history and sensitivity of the largest tropical peatland in Congo.

When peat swamps dry out they can release large amounts of greenhouse gases into the atmosphere. Because they react so sensitively to climate changes, they are also important tipping points. A study published in Nature by an international team, led by researchers from MARUM – Center for Marine Environmental Sciences at the University of Bremen, the French National Research Institute for Sustainable Development (IRD, France) and the University of Leeds (UK), along with a number of other institutes, investigates how sensitively the carbon stored in peat in Central Africa reacts to environmental changes and what impacts this can have on climate and the global carbon cycle.

Not only seas and oceans sequester carbon from the atmosphere, but also peatlands. They are considered to contain the largest terrestrial carbon stores. Plant remains, and thus carbon, that break down in areas covered with water are stored under oxygen-poor conditions as long as the peat remains covered with water. Peatlands, therefore, can only function as a carbon sink if the swamps do not dry out, for example, as a result of climate change or due to human activities such as agriculture, peat mining or road construction.

The Congo Basin is one of the largest river basins in the world. It is largely characterized by tropical forests, but in the central basin, known as the Cuvette, swamp forests predominate. Until the year 2000, it was believed that the area was only rain forest. Around that time, however, satellite observations revealed that the land under the trees is covered by water. Mapping in 2017 discovered that this area contains the world’s largest peatland complex, covering more than 167,600 square kilometers, which is more than four times the area of Baden-Württemberg. At the 26th United Nations Climate Change Conference in 2021, 1.5 billion US dollars were committed to promote the preservation of this unique ecosystem, in part by the European Union and Germany.

Dr. Enno Schefuß of MARUM – the Center for Marine Environmental Sciences, has long been studying the Congo Basin and its importance for the global carbon cycle. He led a sampling expedition to the area in the spring of 2022. The ongoing German-French cooperative project is financed in part by the German Research Foundation (Deutsche Forschungsgemeinschaft – DFG). He and his colleagues are now studying the sensitivity of this unique ecosystem in relation to climate change. “Almost nothing is known about the origin and history of this peatland area, or about its carbon dynamics,” says Enno Schefuß, one of the main authors of the Nature article. “But this knowledge is crucial for evaluating the susceptibility of the ecosystem to climate change and providing information about the impacts of logging, oil exploration and agriculture.”

Dating of the peat cores reveals a pattern that is consistently repeated in the region. Between around 7,500 and 2,000 years ago, there was a phase during which the peat was highly condensed. Geochemical analyses have shown that peat was being deposited during that time, but it decomposed and lost most of its carbon. The peat that now exists from that time interval is merely a remnant of the original peat, which was several meters thick. At the same time, in marine sediments off the coast of the Congo River, refractory, i.e. non-degraded parts of the older peat were deposited. This input of terrestrial organic material into the ocean by rivers is an important component of the global carbon cycle, which is a focus of research within the “Ocean Floor” Cluster of Excellence at MARUM.

What happened? “Using the technique of paleohydrological reconstruction, which allows the inference of precipitation conditions in the past, we concluded that the swamp dried out during this phase,” Schefuß reports. “We were able to obtain estimates of the amount of rainfall before, during and after the phase of decomposition.” It is interesting to note that the decomposition affected not only the peat formed during that time, but also older peat layers beneath it. “It could be said that the degradation ‘burned-down’ into the peat.”

Using modern climate data, the precise peat distribution, and the reconstruction of rain patterns, Schefuß and his colleagues were able to determine the conditions of peat formation, the decomposition conditions, and the present-day situation. Prior to the decomposition phase, the rainfall conditions were similar to today’s tropical swamps in North and South America, Asia and Oceania. During the decomposition, the rainfall averaged around one meter less each year. It was only about 2,000 years ago that the situation became sufficiently stabilized for the peat to start forming again. The peat swamps in tropical Africa today, however, exist under significantly drier climate conditions than are found in other tropical swamps. The authors of the study thus conclude that it is precariously close to a tipping point.

“As scientists, it is our task to produce robust data that will empower policy makers to protect vulnerable ecosystems while enabling sustainable development,” explains Schefuß. “Our results show that the peat in the tropical Congo Basin is close to the tipping point from being a carbon sink to becoming a carbon source, but also that it is resilient and can recover under favorable conditions. I would strongly emphasize the need for improving assessments of the vulnerability of these species- and carbon-rich ecosystems to climate change in the 21st century through continued research involving local colleagues, in order to predict their future development.”

MARUM produces fundamental scientific knowledge about the role of the ocean and the seafloor in the total Earth system. The dynamics of the oceans and the seabed significantly impact the entire Earth system through the interaction of geological, physical, biological and chemical processes. These influence both the climate and the global carbon cycle, resulting in the creation of unique biological systems. MARUM is committed to fundamental and unbiased research in the interests of society, the marine environment, and in accordance with the sustainability goals of the United Nations. It publishes its quality-assured scientific data to make it publicly available. MARUM informs the public about new discoveries in the marine environment and provides practical knowledge through its dialogue with society. MARUM cooperation with companies and industrial partners is carried out in accordance with its goal of protecting the marine environment.