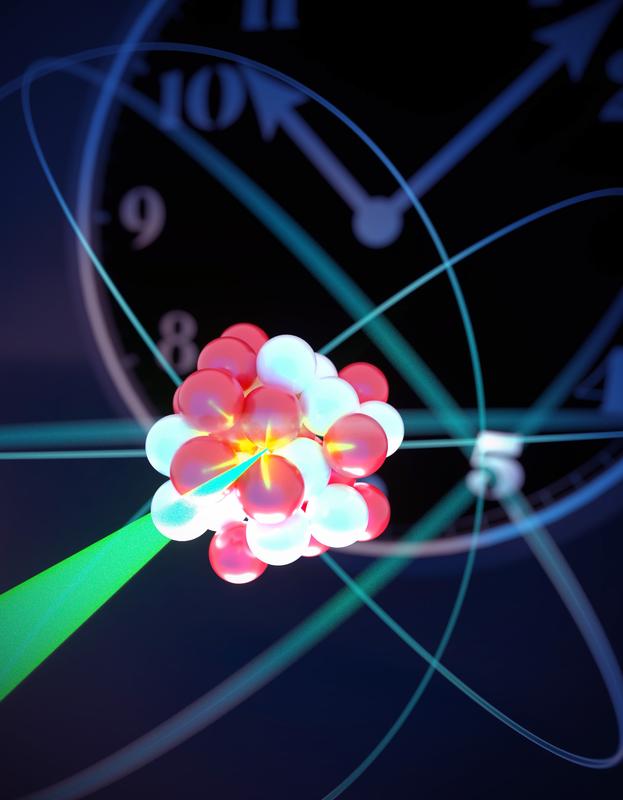 Scientists of the QUEST Institute at PTB have realized and evaluated a new type of optical atomic clock. They report on their results in the current issue of Nature.

Optical atomic clocks are the most accurate measuring instruments ever built and are becoming key tools for basic and applied research, for example to test the constancy of natural constants or for height measurements in geodesy. Now, researchers at the QUEST Institute at the Physikalisch-Technische Bundesanstalt (PTB), in collaboration with the Max Planck Institute for Nuclear Physics (MPIK) and the TU Braunschweig and in the scope of the QuantumFrontiers Cluster of Excellence, have realised for the first time an optical atomic clock based on highly charged ions. This type of ion lends itself to such an application because it has extraordinary atomic properties and low sensitivity to external electromagnetic fields. The researchers report on their results in the current issue of Nature.

Highly charged ions are a common form of matter in the cosmos, where they are found, for example, in the sun or other stars. They are so called because they have lost many electrons and therefore have a high positive charge. This is why the outermost electrons are more strongly bound to the atomic nucleus than in neutral or weakly charged atoms. For this reason, highly charged ions react less strongly to interference from external electromagnetic fields, but become more sensitive probes of fundamental effects of special relativity, quantum electrodynamics and the atomic nucleus. “Therefore, we expected that an optical atomic clock with highly charged ions would help us to better test these fundamental theories”, explains PTB physicist Lukas Spieß. This hope has already been fulfilled: “We were able to detect the quantum electrodynamic nuclear recoil, an important theoretical prediction, in a five-electron system, which has not been achieved in any other experiment before.”

Beforehand, the team had to solve some fundamental problems, such as detection and cooling, in years of work: For atomic clocks, one has to cool the particles down extremely in order to stop them as much as possible and thus read out their frequency at rest. Highly charged ions, however, are produced by creating an extremely hot plasma. Because of their extreme atomic structure, highly charged ions can’t be cooled directly with laser light, and standard detection methods can’t be used either. This was solved by a collaboration between MPIK in Heidelberg and the QUEST Institute at PTB by isolating a single highly charged argon ion from a hot plasma and storing it in an ion trap together with a singly charged beryllium ion. This allows the highly charged ion to be cooled indirectly and studied by means of the beryllium ion. An advanced cryogenic trap system was then built at MPIK and finalized at PTB for the following experiments, which were carried out in part by students switching between the institutions. Subsequently, a quantum algorithm developed at PTB succeeded in cooling the highly charged ion even further, namely close to the quantum mechanical ground state. This corresponded to a temperature of 200 millionths of a kelvin above absolute zero. These results were already published in Nature in 2020 and in Physical Review X in 2021.

Now the researchers have successfully taken the next step: They have realised an optical atomic clock based on thirteen-fold charged argon ions and compared the ticking with the existing ytterbium ion clock at PTB. To do this, they had to analyse the system in great detail in order to understand, for example, the movement of the highly charged ion and the effects of external interference fields. They achieved a measurement uncertainty of 2 parts in 10E17 − comparable to many currently operated optical atomic clocks. “We expect a further reduction of the uncertainty through technical improvements, which should bring us into the range of the best atomic clocks,” says research group leader Piet Schmidt.

The researchers have thus created a serious competitor to existing optical atomic clocks based on, for example, individual ytterbium ions or neutral strontium atoms. The methods used are universally applicable and allow many different highly charged ions to be studied. These include atomic systems that can be used to search for extensions of the Standard Model of particle physics. Other highly charged ions are particularly sensitive to changes in the fine structure constant and to certain dark matter candidates that are required in models beyond the Standard Model but could not be detected with previous methods.
(es/ptb)