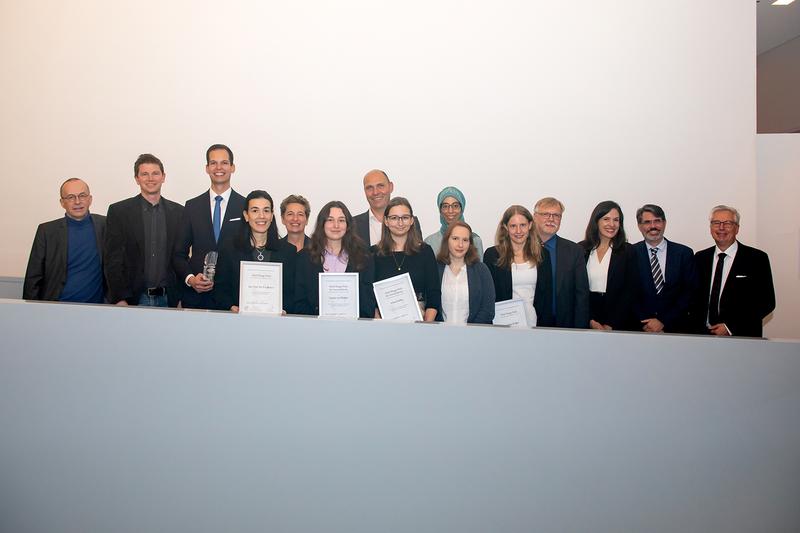 Enthusiasm for chemistry, excellent work and the gift of inspiring others with their passion for their field of work: this is what unites the young men and women who were awarded this year’s Ernst Haage Prize of the two Max Planck Institutes in Mülheim.
As keynote speaker the Ernst Haage Foundation had invited economist Prof. Ottmar Edenhofer of the Potsdam Institute for Climate Impact Research. As Prof. Walter Leitner, Director at the Max Planck Institute for Chemical Energy Conversion and Chairman of the Foundation's Board of Trustees, put it: Edenhofer provided "food for thought" with his lecture "Climate, War and Science: Practical Dilemmas and Theoretical Challenges". Edenhofer explained in a frank manner the state of human efforts to protect the planet from climate change. Humanity is not running out of fossil fuels, Edenhofer said, "but coal, oil and gas simply have to stay underground," he warned. Otherwise, he said, man-made CO2 emissions will have consequences that could dramatically alter planet Earth and lead to increased environmental disasters and extreme weather events. "The global carbon dioxide emissions from coal alone could make us miss our climate targets," Edenhofer said. Political forums as the climate conference in Egypt are important, he said, but basic research and the promotion of enthusiastic young scientists, as successfully implemented at the Max Planck Institutes at the Mülheim Chemistry Campus ultimately provide the basis for sustainable development.
Fascination for the world of molecules was then spread during the presentations of Dr. Eva Blasco and Dr. Sabine Richert, the two winners of the Ernst Haage Prize, which is awarded nationwide. "It is a great exception that we award two laureates in one year," Walter Leitner explained. "But Eva Blasco and Sabine Richert have convinced the Board of their merits in absolutely equal measure. You can be proud of yourself," he praised the two young scientists.
Eva Blasco is working at the University of Heidelberg on polymer-based functional materials - and their use in the field of 3D and 4D printing. Sabine Richert is head of an Emmy Noether research group at the University of Freiburg. She is working, among other things, on information storage in chemical compounds. What particularly struck her about Eva Blasco was her talent for getting students excited about chemistry, reported Prof. Petra Tegeder, who teaches at Heidelberg University and gave the laudatory speech for Blasco. Stefan Weber, Professor of Physical Chemistry at the University of Freiburg, was enthusiastic about the determination and cleverness of his group leader Dr. Sabine Richert, to whom he gave the laudation. He said it was amazing how much she had already achieved at her age.
Mülheim entrepreneur Ernst Haage, name giver of the prize, had always been keen on training young people throughout his life. In his company, many men and women completed an apprenticeship. Consequentially, apprentices are honored with an Ernst Haage Award, too. Jolina Keßler from the Max Planck Institut für Kohlenforschung and Sophie von Buttlar from the Max Planck Institute for Chemical Energy Conversion are two young, curious women with excellent school grades. In addition to their own training, they always care for their fellow trainees, as their mentors Laila Sahraoui and Nina Bäumer were able to report.
This year's Ernst Haage Prize for doctoral students went to Niklas Kinzel, who completed his doctorate at RWTH Aachen University summa cum laude a few weeks ago and will be starting a position with the Bavarian chemical company Wacker next year. During his time at the MPI, Kinzel had worked in Walter Leitner's research group on transition metal complexes and their potential applications in electrochemistry to convert the climate gas carbon dioxide into valuable chemical products. This closed the circle to the keynote lecture, from the societal challenge to basic research on possible solutions.
About the Ernst Haage Prize
Since 2006, the Ernst Haage Prize has been awarded to young scientists for outstanding achievements in the field of chemistry. The prize is awarded in honor of the Mülheim entrepreneur Ernst Haage (1901-1968) and comes with prize money of 7500 euros. Prizes are also awarded annually for particularly successful doctoral theses and for outstanding trainees on the Mülheim campus.
Haage's daughter Ursula Bonnen, who unfortunately passed away in 2019, had established the Ernst Haage Foundation in 2006 together with the MPI for Chemical Energy Conversion. Her father, who was himself head of precision engineering at the Max Planck Campus in Mülheim before founding his own company, had remained closely associated with both institutes throughout his life.