Dust transport in the upper levels of the atmosphere 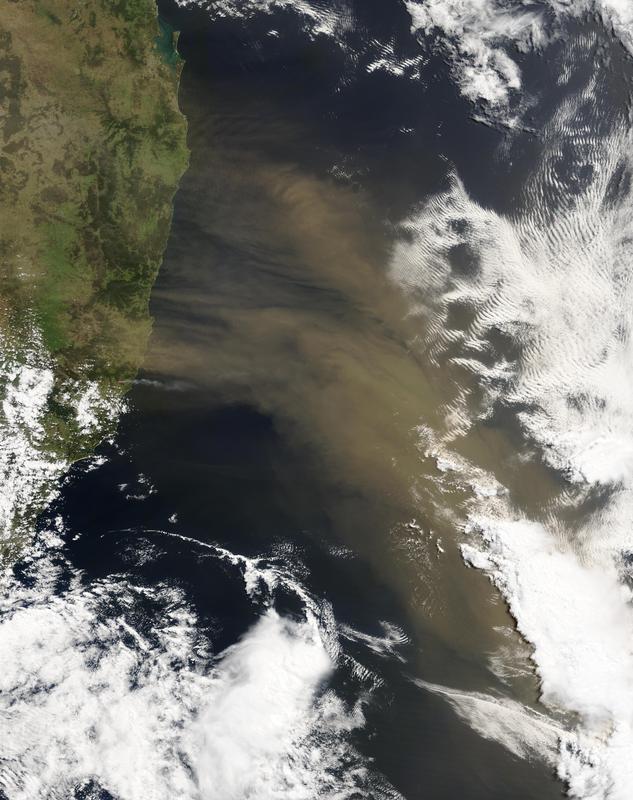 New study shows that particles from central South America were the main source of iron in the South Pacific during the last two glacial periods.

Dust from the dry Puna Plateau in northwestern Argentina was an important source of iron for the nutrient-deficient South Pacific in the last two glacial cycles – especially at the beginning of these cycles. This was the key finding of a study presented in science journal PNAS by a team of researchers led by geochemist Dr Torben Struve from the University of Oldenburg. According to the team's theory, the jet stream circulation – powerful air currents flowing from west to east at an altitude of several kilometres – picked up the fine mineral particles on the east side of the Andes and transported them almost all the way around the Antarctic continent to the Southeast Pacific. Using a sediment core from the seafloor as a climate archive, the researchers were able to reconstruct the contributions from various dust sources located on the surrounding continents.

Atmospheric dust is a key component of the climate system. On the one hand, fine dust particles influence the Earth's energy budget, because they reflect incoming sunlight at high altitude which has a cooling effect. On the other hand, mineral particles can carry nutrients such as iron and manganese to remote ocean areas where they stimulate the growth of algae. When the algae die and sink to the deep ocean, they remove carbon dioxide from the atmosphere, which also has a cooling effect. These mechanisms can be particularly effective in the remote and iron-deficient subpolar Southern Ocean so that changes in the Southern Hemisphere dust cycle are ascribed a significant role in the natural alternation between cold glacial and warm interglacial periods in the past. Therefore, the sources and transport pathways of dust have been the subject of intensive research for some time now.

Struve's team analysed a sediment core from the seafloor of the subpolar South Pacific in which the deposits date all the way back to 260,000 years ago, thus covering two glacial cycles. Using the geochemical fingerprint of the dust fraction in the core, the researchers were able to determine the proportion of particles from South America, South Africa, Australia and New Zealand in the different phases of the two glacial cycles. “We were surprised to find that dust from South America dominated throughout the study period, even though it had to travel a very long distance from the source to our sampling site,” says Struve, lead author of the paper.

According to the analysis, up to two-thirds of the particles originated there, and this proportion was particularly high at the beginning of the glacial cycles. Land masses located closer to the sampling site, such as Australia and New Zealand, contributed only just over half of the deposited dust, and over relatively short periods of time. Their contributions increased particularly towards the end of the glacial periods, when global temperatures started to increase again.

The researchers conclude from this data that the South American dust was emitted from the high elevation source regions of the eastern Andes into the jet stream and travelled around Antarctica in the upper levels of the atmosphere. In contrast, dust particles from the low-elevation source regions in Australia and New Zealand were washed out of the atmosphere more quickly with the rain so they rarely reached such heights for long-distance transport.

The study showed that most of the South American dust came from regions in the Andes spanning the northwest of present-day Argentina and southern Bolivia and located at altitudes of up to 5,000 metres. This area includes parts of the Puna-Altiplano Plateau and the dry high valleys of the Central Andes. Until now, however, it has received little attention from researchers as a potential source of iron for the Southern Ocean. The team reports that the dust originating from this region contained higher proportions of bioavailable iron during the ice ages, probably due to increased glacial activity in the source regions.

The study concludes that dust production from all sources increased in the glacial periods compared to the warmer interglacial periods, with the result that the iron input from dust increased by a factor of three to six – a finding that confirms earlier studies according to which it was drier and presumably also windier in cooler climates than in warm periods. The team also found evidence in the data that the westerly winds that prevail around Antarctica shifted southwards or slowed down at the end of the ice ages and during the warm interglacial periods.

These findings could contribute to a better understanding of the alternation between glacial and interglacial periods in the Southern Hemisphere, notes Struve: “How exactly natural iron fertilization in the Southern Ocean amplified these climatic changes is not yet fully understood,” the geochemist adds, but he underlines that the new data offers valuable insights and can be incorporated into current Earth system models, which in turn would provide a more detailed picture of the involved processes.

However, the question of whether it makes sense to artificially fertilize nutrient-deficient ocean areas with iron to reduce the current rate of climate change cannot be answered with this study, Struve stresses. “I would be very cautious about that – to achieve a significant effect you would need to supply remote ocean areas with bioavailable iron over long periods of time and on a large scale. That hardly seems feasible.”

In addition to the researchers from the University of Oldenburg’s Institute for Chemistry and Biology of the Marine Environment, a scientist from the Alfred Wegener Institute, Helmholtz Centre for Polar and Marine Research in Bremerhaven and another scientist from the Lamont-Doherty Earth Observatory at Columbia University in New York State participated in the study.