How lymph nodes are supplied with blood 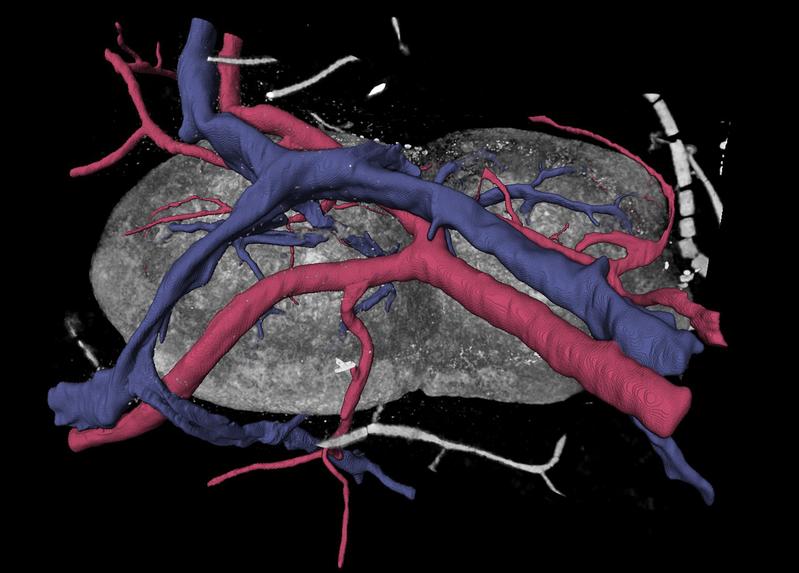 When our immune system runs it sets in motion antibodies, white blood cells and phagocytes. But how this works is not yet understood in all details - specifically, in the lymph nodes, which are important elements of the immune system. It was unclear, for example, how the blood supply to and within the nodes works in detail. This question has now been unravelled by an interdisciplinary research team with the participation of the Helmholtz-Zentrum Hereon, 3D images have been obtained that show the vascular system of the nodes with previously unattained resolution - and contradict the current textbook knowledge. The team presents its results in the scientific journal Frontiers in Immunology.

Every person has around 600 to 700 lymph nodes. They are distributed over the entire body and measure between 3 and 30 millimetres. These nodes play an essential role in our immune defence: they activate white blood cells, the lymphocytes, and also contain macrophages, i.e. scavenger cells. "Nevertheless, we are far from knowing everything about these important parts of the immune system," explains Dr Jörg Hammel, a biologist at the Institute of Materials Physics, located at the Outstation at DESY in Hamburg. "Among other things, it was not yet known how the blood vessel system looks in details, which supplies the nodes with oxygen and nutrients and that also plays an important role in homing immune cells into the lymph nodes."

To solve the puzzle, the research group used a special analytical approach - microtomography. In principle, it works just like a conventional CT scanner in a hospital, which takes three-dimensional X-ray images of the inside of the body. But, unlike the standard procedure, the team did not use a conventional X-ray tube as a radiation source, but the high-intensity and highly focused beam from the PETRA III storage ring at DESY. "This gives us better contrast as well as higher image resolution," Hammel explains. "So we can look into a sample in much more detail than it is possible in a hospital."

In their experiments, the experts scanned the lymph nodes of healthy mice. They used a special variant of microtomography called the phase-contrast method. Here, the X-ray light passes through a two-dimensional grid before it hits the sample. This grid generates a defined illumination pattern, which is then systematically moved over the sample. At the same time, sensitive detectors record the radiation that passes through the sample. Afterwards, it can be reconstructed by computer algorithm how the sample looks like in detail. Particularly advantageous: "In contrast to the usual methods, we don't need a contrast medium," says Hammel. "This allowed us to leave the lymph nodes almost in their native state for the examination."

The results are impressive 3D models based on high resolution X-ray images of the nodes. The network of blood vessels can be seen on them with an accuracy of two micrometres. During the evaluation, the team came across a surprise: Until now, experts had assumed that the blood vessels only enter and exit the lymph nodes at a single point - similar to a wall in which there is only one electric socket. In contrast, the new images show that the vessels enter over a much larger area. So the wall has several sockets, distributed over a certain area - previous textbook knowledge has probably been disproved.

"This seems to make sense insofar as the lymph nodes, when they become activated during an infection, will swell by several times of their original volume," describes Jörg Hammel. "By having the vessels enter at multiple sites instead of just one, the vascular system of the lymph nodes can respond more effectively and selectively to the swelling when activated." The study is a collaborative effort of the Interdisciplinary Neurobiological Immunology Group (INI-Research), a cooperation partner of the University of Hamburg, the Helmholtz Centre Hereon, the Technical University of Munich, and the Universities of Hamburg and Duisburg-Essen.

The method promises a lot more for the future: For example, it could be possible to examine the vessels of lymph nodes that have been activated by an infection and have swollen to several times their size. "The nodes are distributed all over the body," says Hammel. "We could look at how the lymph nodes in different parts of the body react to an infection." It would also be interesting to analyse the reaction of the nodes to a SARS-Cov-2 infection. After all, it is known that the viruses affect not only the lungs but also blood vessels. Furthermore, it could also be exciting to detect whether there are any gender-specific differences in the lymph nodes - a highly topical research field.

Wissenschaftlicher Ansprechpartner:
Dr. Jörg U. Hammel I Helmholtz-Zentrum Hereon I Institute of Materials Physics I T: +49 40 (0)8998 5303 I joerg.hammel@hereon.de