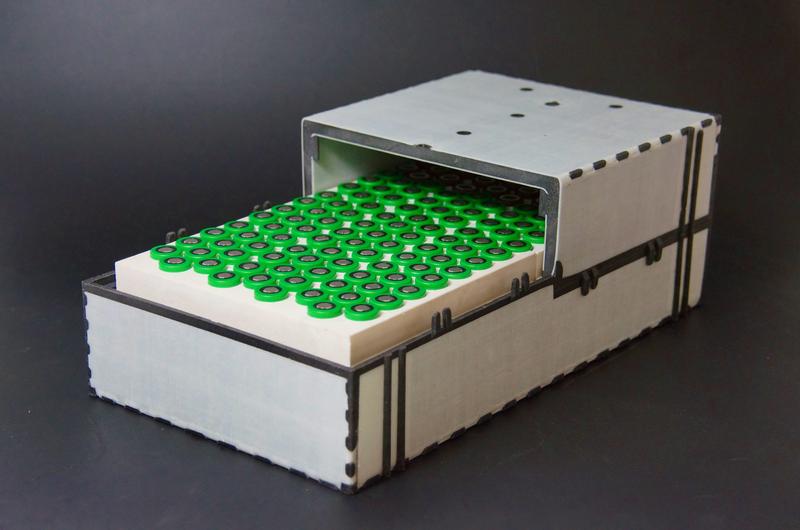 In times of impending bans for diesel and generally internal combustion engine (ICE) vehicles, battery electric vehicles (BEVs) are becoming increasingly interesting for buyers, especially in urban environments. Boosting battery capacities enable longer travels, however driving range of EVs varies especially at low ambient temperatures. Within the EU project “OPTEMUS” a large number of efficiency-enhancing technologies were developed. This includes a traction battery with thermal storage capacity. The focus is on a novel sandwich battery housing made of continuous fibre reinforced thermoplastics (CFRTP), which helps to insulate stored heat in the traction battery for preconditioning.

The heat storage material developed by Fraunhofer Institute for Structural Durability and System Reliability LBF can be used to precondition the temperature-sensitive battery cells in cold weather before the ride and to keep them at an optimum operating temperature using the thermally insulating CFRTP sandwich housing. An active temperature control can thus often be avoided. Conversely, it is possible to mitigate short-term, unwanted heat increases of the battery, which may arise during fast charging. »The material, structure and process technologies we have developed guarantee the driver a more reliable and consistent range of his BEV. In addition, vehicle developers and designers benefit from a new process technology for lightweight construction and functional integration", explains Felix Weidmann, who was responsible for the research project at the Fraunhofer LBF.

Mechanical and thermal requirements are provided by the novel CFRTP battery housing. This is composed by a sandwich structure based on UD tape facesheets (UDMAX™, SABIC) covering an integral polymer foam core. While the foam core provides thermal insulation, the facesheets bear most of the loads. For this purpose, LBF scientists consolidated UD tapes into a cross composite which was preformed into three dimensional (3D) composite facesheets. Between these 3D facesheets, the polymer foam core is injection moulded using a novel hybrid in-situ manufacturing process. The resulting sandwich construction has several advantages: It offers high lightweight potential and enables high specific bending properties and impact resistance. In addition, it provides a high level of protection against intrusion events, which play a major safety role especially in battery packs.

In order to meet automotive requirements, the material and structure concept has been developed with respect to high volume applications. The manufacture of the OPTEMUS battery housings is realized by a hybrid manufacturing process developed at the Fraunhofer LBF, which makes it possible for the first time to provide CFRTP sandwich component with function integration and thermal insulation in a mere 2 minutes.

Fraunhofer LBF will present its research results from 12 to 14 March 2019 at the JEC trade fair in Paris at the Hessen joint exhibition in Hall 5, booth G71.